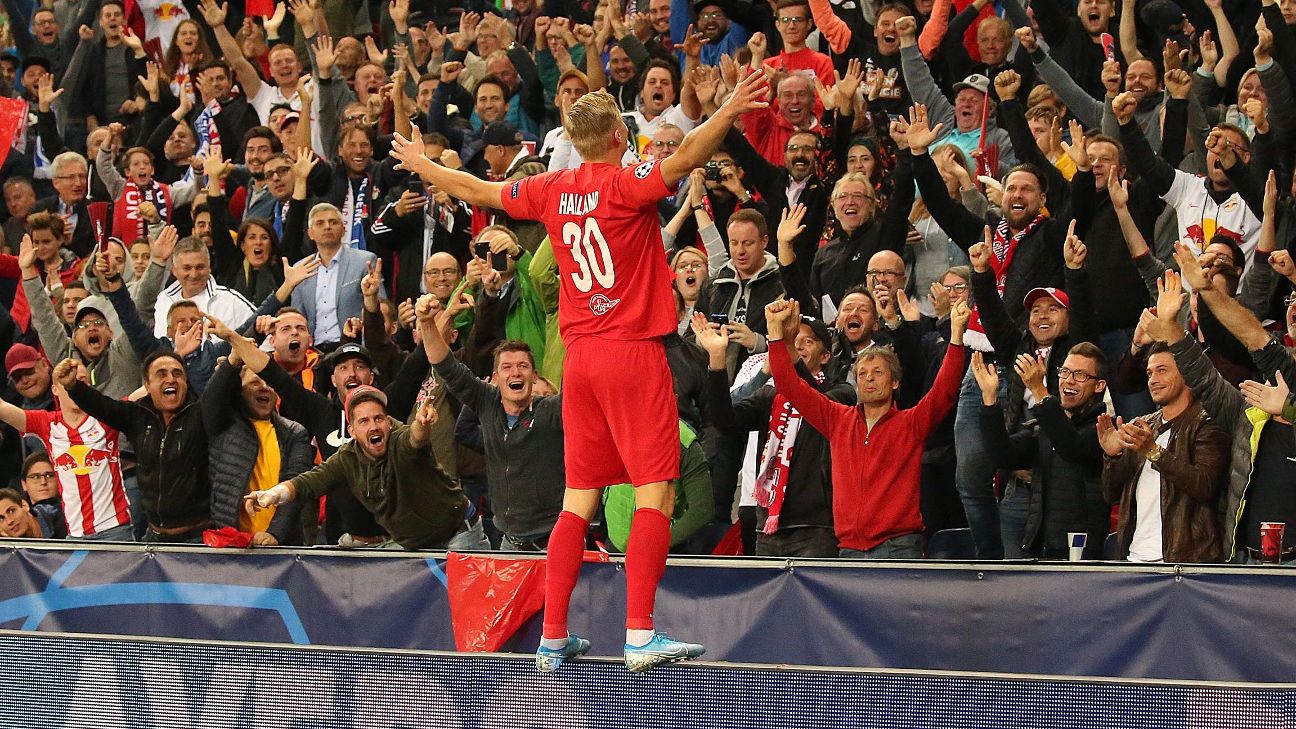 TOP STORY: Haland in the spotlight after UCL hat trick

It has been a whirlwind week for FC Salzburg’s Erling Braut Haland. The son of former Leeds favourite Alf-Inge Haland scored a hat trick for the Austrian side in a 6-2 win over Racing Genk in the Champions League on Tuesday, with his goalscoring feats witnessed by scouts from Manchester United. That sparked immediate speculation that he was bound for Old Trafford to play under countryman and Norwegian legend Ole Gunnar Solskjaer.

However, according to Mundo Deportivo, it appears as though Barcelona are dead keen on getting in on the act too. The Spanish outlet reports that the Catalan giants were mightily impressed with his goalscoring feats in the opening round of Champions League group ties and now have the 19-year-old firmly on their radar as they prepare for a transfer raid in January or next summer.

His father, meanwhile, has told Norway station TV2 that it would be “nice” if his son — who scored nine goals for Norway in a U20 World Cup match against Honduras earlier this year — joined Manchester United, despite playing for the club’s most hated rivals, Leeds United and Manchester City, during his playing career.

Good luck if you’re heading to Yorkshire or the Etihad soon, Alf-Inge!

Martinez to team up with Almiron again?

Could Newcastle do a double dip and bring Josef Martinez in January from defending MLS champions Atlanta United?

A report by Chronicle Live says the Magpies are eyeing the Venezuelan goal machine, who is in the hunt for the world record for most consecutive games with a goal.

Newcastle brought in Martinez’s ex-teammate Miguel Almiron during the past January window, after the South American duo led Atlanta to the MLS Cup title in the team’s second year of existence.

The Paraguayan has struggled to adapt to the Premier League as Newcastle flounders in the relegation zone, but maybe bringing in his old pal would ignite St. James’ Park.

Martinez has 26 goals in this MLS campaign, and he has scored in a league-record 15 straight games. Lionel Messi is considered to have the world record in netting in 21 successive games.

The MLS regular season wraps up next month, with Atlanta poised to make another deep playoff run in hopes of a repeat league championship.

The Toffees’ boss, Marco Silva, has confirmed the club will be on the lookout for a new central defender in January — which is hardly surprising given the somewhat sticky situation the club now find themselves in.

Speaking before the Blues’ Goodison Park clash with Premier League new boys Sheffield United, the Liverpool Echo reports that Silva recognises the need to boost his central defensive resources after the club allowed Phil Jagielka to leave Merseyside and head back to the Blades in the summer.

His departure left Everton with just three senior central defenders at the start of the season, and injuries to any of them could spell huge trouble for a club that have enjoyed a typically inconsistent start to their Premier League campaign.

The club were linked with a number of defenders during the transfer window, with moves for Chelsea’s Kurt Zouma and Fikayo Tomori both failing to get off the ground. An attempt to sign Manchester United’s Marcos Rojo also didn’t get over the line.

“Even if you don’t speak about that every week, it is normal we have chats about it and, of course, you are always looking,” he said. “We will see, and what we can do to strengthen our squad in January, if you can, or next season again.”

In the meantime, Everton will rely on Michael Keane, Yerry Mina and Mason Holgate and cross their fingers that all three can stay fit for as long as possible before the window reopens.

– Juventus were apparently in the running to sign Joao Felix from Benfica. In fact, they were front-runners. That’s what Calciomercato claims, with representatives for the player apparently meeting Juve’s  top brass back in February. Whatever was said didn’t change his final destination, though, with the player eventually heading to Atletico Madrid on a seven-year deal.

– Callum Hudson-Odoi must put in the hard yards to be a success at Chelsea, says manager Frank Lampard — after the club handed him a five-year deal worth a reported £180,000 a week. The young England star has been the subject of intense interest from Bayern Munich but has now put pen to paper on a deal that should make him a central figure in Chelsea’s plans for years to come. Providing he puts in the work.