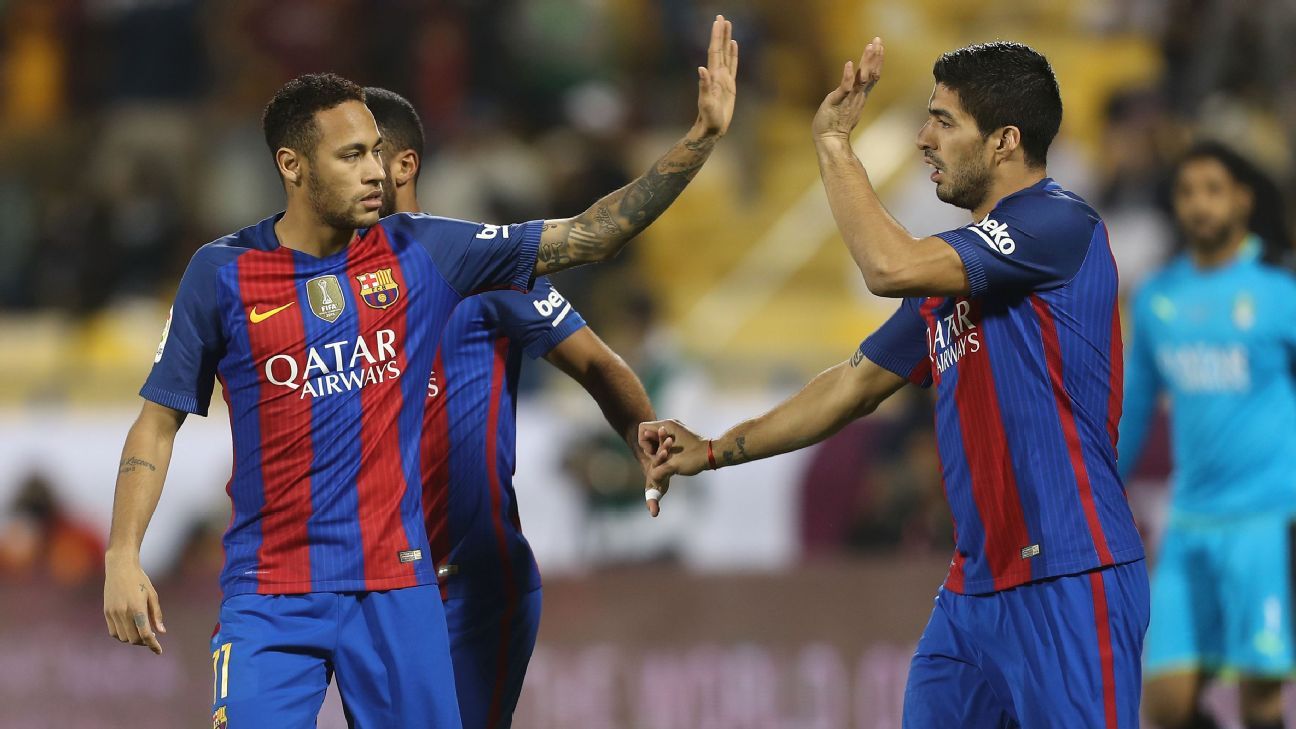 The Brazil forward’s rationale for linking up again with his former Barcelona teammate is that he considers the Uruguayan to be “a winner,” Sport claims.

Barcelona will likely rule out selling to the French side, though, as they have no desire to change their front line, let alone strengthen a direct rival in the Champions League — particularly in light of former target Antoine Griezmann committing his future to Atletico Madrid.

Neymar’s wish could test his relationship with the French club a year after they broke the world-record transfer fee at £200 million for his services, with Cavani’s standing high as their all-time-record scorer with 170 goals in five seasons.

22.19 BST: That’s going to bring to an end Sunday’s live edition of Transfer Talk. Thanks very much for joining us, and be sure to check back in a few hours when we return with all the latest gossip pulled from Monday’s back pages.

21.58 BST: Chelsea are exploring the possibility of making 6-foot-4 central defender and Croatia U21 international Filip Benkovic their first signing of the summer, the Star cites Tuttosport as reporting, with Dinamo Zagreb holding out for £25 million for a player who’s drawing interest from AC Milan.

21.21 BST: Multiple outlets in Germany are reporting that U.S. international Bobby Wood is set to join Hannover 96 on loan from Hamburg, with a deal expected to be announced on Monday.

20.44 BST: Jean Michael Seri has not travelled with Nice for their preseason camp, according to Sky Sports, which has set tongues wagging that he could be set for a move.

Linked to Barcelona in the past, the 26-year-old is also thought to be on the radar of several Premier League clubs, as well as Napoli and Sevilla.

The Sky report says the midfielder’s deal with Nice contains a £35m release clause, which is in place until July 15.

20.01 BST: Stop us if you’ve heard this one before, but there’s talk of Manchester United resuming their chase for Chelsea’s Willian.

According to The Sun, The Old Trafford club is prepared to pay £60 million for the 29-year-old, who is also attracting interest from Barcelona.

19.35 BST: Brazil midfielder Paulinho has a completed a move back to Chinese side Guangzhou Evergrande just 11 months after joining Barcelona for €40 million. Read the full story.

19.08 BST: Eden Hazard is Real Madrid’s “Plan C”, according to AS. The Spanish outlet reports that should Los Blancos fail to sign Neymar or Kylian Mbappe this summer, as presumptive replacements for the seemingly Juventus-bound Cristiano Ronaldo, they will turn their attentions to the Chelsea talisman, who’s been in scintillating form for Belgium on their run to the World Cup semifinals.

18.31 BST: Manchester City have agreed a £60 million deal for Leicester City attacker Riyad Mahrez, according to the Mail, with the 27-year-old expected to undergo a medical in the next 48 hours.

17.54 BST: The Liverpool Echo reports that Liverpool have rejected a loan bid from Celtic for 21-year-old winger Harry Wilson. The Echo states that the lack of playing time loanees Patrick Roberts of Manchester City and Chelsea’s Charly Musonda received at Celtic Park has discouraged Jurgen Klopp from any deal, while it also cites unnamed Scottish reports suggesting that the Anfield outfit are demanding a hefty loan fee for Wilson, which Celtic are unwilling to meet.

17.27 BST: Chelsea winger Kenedy has agreed to return to Newcastle for a season-long loan after a successful loan stint at St James’ Park this spring, the Mail reports. The 22-year-old has opted for Tyneside amid reported interest from RB Leipzig, Bayern Munich and Paris Saint-Germain.

17.00 BST: Stoke City’s wait to sign Newcastle winger Matt Ritchie goes on, with the Mirror reporting that the Magpies will do business only when they have managed to sign either Kenedy or Andros Townsend.

16.30 BST: Everton’s attempt to sign full-back Kieran Tierney from Celtic could be over before it has started, says the Liverpool Echo. It reports that the Goodison Park club are reluctant to pay the £25 million asking price set by the Scottish champions and could now turn their attentions elsewhere.

16.00 BST: It could soon be a case of one striker out, one in at Middlesbrough, with Britt Assombalonga on his way if the right offer is received and Burnley’s Sam Vokes a potential arrival, the Northern Echo reports.

15.30 BST: Championship duo Leeds and QPR are interested in signing West Ham striker Jordan Hugill on loan, according to reports.

14.50 BST: Goalkeeper Joe Hart will seek a permanent move from Manchester City in the summer after spending last season on loan at West Ham, the Mail reports.

13.55 BST: Liverpool are not interested in Aston Villa midfielder Jack Grealish despite reports that they have held talks about a potential move, according to the Liverpool Echo.

13.10 BST: Everton could make a move for Sweden winger Emil Forsberg, according to the Mirror, which reports that the RB Leipzig player would be likely to cost them around £30 million.

12.45 BST: A little more on Jack Wilshere, this time courtesy of the Mirror, which reports that “following face-to-face talks with West Ham manager Manuel Pellegrini during the week, the midfielder looks set to stay in the capital by signing a three-year deal worth £100,000 a week.”

12.00 BST: Corinthians have said defender Fabian Balbuena is on his way to West Ham after the Londoners agreed to pay his release clause, the Mirror reports.

11.45 BST: Lyon president Jean-Michel Aulas has said he thinks Nabil Fekir will be at the club next season, but added that he gave him permission to join Liverpool last month “because of their legendary status.”

11.00 BST: Jack Wilshere‘s move to West Ham appears to be getting closer and closer — Sky Sports reports that the former Arsenal man “is expected to join this week after completing medical.”

10.00 BST: Real Madrid midfielder Luka Modric has said he does not think Cristiano Ronaldo will leave the Bernabeu despite increasing speculation that he could join Italian champions Juventus.

09.30 BST: Could there be more rumblings behind the scenes at Newcastle? The Chronicle reports that manager Rafa Benitez will not sign a contract extension until he is satisfied with the club’s ambition in the transfer market.

Patrick Roberts is set to join Leicester for £10m after failing to break through at Manchester City.

The 21-year-old showed flashes at Celtic during two seasons on loan, and now the Foxes are willing to offer him a chance to establish himself in the Premier League, claims the Mirror.

City believe the move should smooth tensions between the clubs and allow Riyad Mahrez’s protracted move to the Etihad to finally be rubber-stamped.

The Algerian will cost £60m and join Pep Guardiola’s star-studded attack as they bid to finally win the Champions League after claiming the Premier League title last term in dominant fashion.

West Ham have made a £17.5m bid for Borussia Dortmund winger Andriy Yarmolenko, according to the Mail.

Talks have stalled over a move for Lazio star Felipe Anderson, though Jack Wilshere’s arrival on a free transfer, after his Arsenal contract expired, could be made official next week, says the report.

They have also met the release clause of Corinthians defender Fabian Balbuena, who will join Issa Diop, Ryan Fredericks and Lukasz Fabianski as new arrivals at the London Stadium.

The Giallorossi are keen on the Moroccan international, who impressed in flashes at the World Cup with Herve Renard’s side unfortunate to be eliminated in the group stages.

The 25-year-old scored nine and assisted on an incredible 17 more in the Eredivisie last term, but with three years left on his contract, Ajax hold a strong bargaining position.

Monchi also admits he wants a new goalkeeper, despite the arrival of Antonio Mirante, which suggests Alisson, amidst interest from Chelsea and Real Madrid, could be sold.

Haaland, son of former Leeds and Manchester City defender Alf-Inge, has struck six goals already this season, and the Red Devils are one of over a dozen clubs keen to catch a glimpse of the 17-year-old on Sunday.

– Leeds are looking to sign West Ham’s forgotten man, Jordan Hugill, but QPR are also in the race for the former Preston striker, says The Sun.

The Hammers paid £10m for the 26-year-old in January but may be forced to loan the forward out after his market value diminished significantly after just three appearances and no goals under David Moyes.

– United States international Erik Palmer-Brown has been loaned from Manchester City to Eredivisie side NAC Breda for the upcoming 2018-19 season, the club have announced.