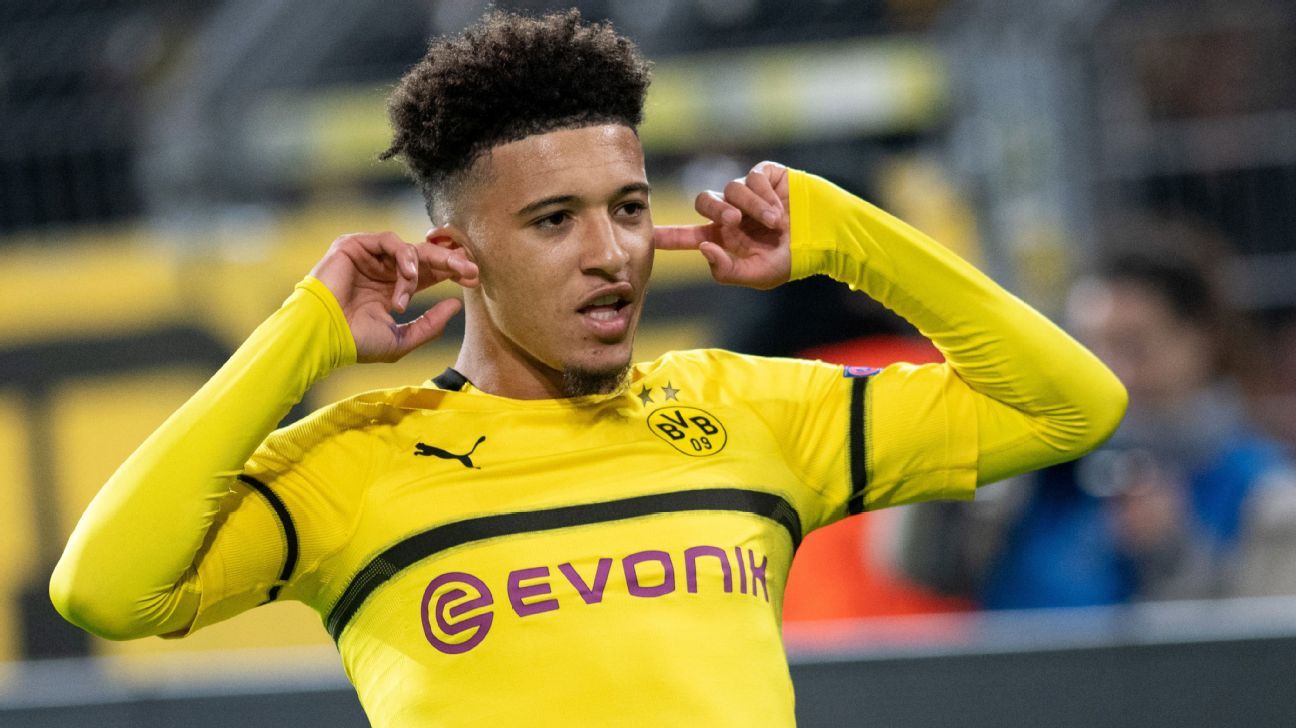 Juventus only signed Cristiano Ronaldo this summer but the Italian club are already seemingly looking for his future replacement, with Borussia Dortmund’s Jadon Sancho on their radar according to Calciomercato.

Ronaldo is 33 years old but has stated that he wants to keep playing until he’s 40, and we’re all more than aware of his incredible physique so that’s a distinct possibility. It could be, of course, that Juve just want to snap up Sancho before his price rockets above the €80 million they are willing to splash out now. Or that they want him now to learn from CR7 himself while he’s still on the pitch.

Either way, the 18-year-old has impressed for Bundesliga leaders Dortmund this season with five goals and seven assists in all competitions and is attracting most of Europe’s top clubs. So one can only imagine how the England international would develop under Ronaldo’s watchful eye.

22.10 BST: That’s going to bring Tuesday’s live edition of Transfer Talk to a close. Thanks very much for joining us, and be sure to check back in a few short hours when we return with all the latest headlines pulled from Wednesday’s back pages.

20.38 BST: With a staggering 12 players set to have their contracts expire, Manchester United are involved in “ongoing” negotiations to extend deals of Juan Mata and Ander Herrera, according to Sky Sports.

19.22 BST: The Express reports that Arsenal “are seriously monitoring” Juventus centre-back Daniele Rugani, and the report also claims Chelsea’s Andreas Christensen and Manchester United’s Eric Bailly could be alternatives to help shore up the Gunners’ defence.

18.06 BST: The Evening Standard is reporting that Mesut Ozil turned down offers of £1m a week in Asia in order to sign his new £350,000-a-week contract with Arsenal last season.

16.40 GMT: Wayne Rooney is making a farewell appearance for England against the United States on Thursday but there’s also been rumours he may leave D.C. United and head back to England on loan. Not so…

“I’ve seen talk about a loan move but I’m not prepared to do it,” he told a news conference. “I’ve found my feet in States and the children are settled.”

16.30 GMT: Brighton fans rejoice… striker Glenn Murray has extended his contract until the end of the 2019-20 season.

15.36 GMT: Real Betis left-back Junior Firpo caught the eye when he scored against Barcelona at the weekend, so naturally he’s now being linked with Arsenal and Manchester City by AS. Evidently he has a £43.5m release clause so…

14.50 GMT: French outlet Le Foot claim that Chelsea striker Olivier Giroud could be on his way way to Marseille in January,

13.49 GMT: If Alexis Sanchez was hoping that PSG would swoop in and save him from his nightmare at Manchester United, he won’t want to read the Independent. It says that PSG are no longer keen on the 29-year-old and believe they already have one of the best forward lines in the world.

12.56 GMT: Real Madrid are reportedly interested in Juan Quintero, who has been on loan at River Plate from FC Porto since January. The Colombia winger has helped his side reach the Copa Libertadores final, but Le10Sport report that an even bigger prize could be on the horizon if he keeps performing.

12.14 GMT: Chelsea and Manchester United could be set for disappointment after the agent of Napoli defender Elseid Hysaj told Calciomercato that discussions are in progress over a new contract.

11.49 GMT: Thorgan Hazard should know how his brother Eden thinks. So when he says he made the right decision to stay at Chelsea until the end of the season, you can trust it.

“Real Madrid are in transition,” he told Sky Sports. “He’ll wait and give his best, then see what happens at the end of the season. He doesn’t want to clash with Chelsea. If he does go one day he’ll do it in the correct way, without problems for the club.”

11.21 GMT: Tottenham need a backup for Harry Kane, that’s clear. Step forward Celta Vigo forward Maxi Gomez, who El Pais say is top of their list. Having scored six goals in 10 La Liga games for Celta, the 22-year-old might fancy staying put rather than moving to sit on the Spurs bench though.

10.10 GMT: Andres Iniesta has said it would not upset him to see his former Barcelona teammate Neymar play for Real Madrid one day.

09.52 GMT: Ashley Young will ensure he will be part of Jose Mourinho’s first-team plans before penning a new contract at Manchester United, sources have told ESPN FC.

09.45 GMT: Antonio Conte insists he is in no rush to return to coaching after Real Madrid confirmed to the Spanish FA (RFEF) that Santiago Solari will remain in charge of the team for at least the rest of the season.

Speaking to Sky Italy, Conte hinted that he did not feel Madrid was a good fit and confirmed that he wants to choose his next club carefully.

09.03 GMT: Chelsea defender Andreas Christensen wants to leave… but doesn’t think he will in January.

“Difficult question. No, I don’t think so,” he said when asked by Sky Sports about whether his future lies away from the club. “Things are different from last season. I played a lot of games [last season] but this season it hasn’t been like that. It’s always difficult for a player but we’ll see what happens.”

08.45 GMT: The agent of Barcelona forward Ousmane Dembele insists his client is able to “shut out” all the “unfounded” criticism that has rained down on him recently and that it will not push the World Cup winner to question his future with the La Liga giants.

Dembele’s lifestyle has been called into question of late with reports the France international has regularly arrived late for team meetings and games with his club, but Moussa Sissoko told RMC: “Ousmane’s not reacting too badly. He’s knows how to shut out that criticism, especially when it’s unfounded. Having said that, he knows how to use it when it’s not, to react in the best way possible on and off the pitch.

“Ousmane is 20 [actually 21], plays for Barcelona, one of the biggest clubs in the world. He’s had a super start to the season scoring six goals and two assists. I don’t understand all the critcism right now. We’re aware there are things to improve, that’s for sure. He’s 20, it’s normal. But Ousmane is very calm, he keeps working.”

Chelsea manager Maurizio Sarri wants Lyon playmaker Nabil Fekir at Stamford Bridge and has spoken to him about a move, the Sun says.

Fekir had been on the brink of joining Liverpool before the World Cup, but the transfer stalled and talks failed to resume.

The France international has since been linked with Bayern Munich, Real Madrid and Chelsea — and the Sun, citing reports, says Sarri has tried to seize the initiative. It says he has told Fekir he “would play a key role,” but competition for his signature will be intense, with Madrid and Bayern reported to have had him watched recently.

United and Sanchez ‘stuck with each other’

There could be plenty of changes at Manchester United in January — but the departure of Alexis Sanchez will not be one of them, says the Telegraph.

Recent reports suggested Sanchez was hopeful that Paris Saint-Germain could move for him, claiming the former Arsenal player felt “isolated.”

But the Telegraph says United and Sanchez “fear they are stuck with each other” amid “growing concerns that his signing was a costly mistake.”

It adds that the club “have seen next to nothing for their huge investment” but his struggles on the pitch and the cost that would be involved in signing him have put off other clubs.

That may spell the end of the United road for Eric Bailly, although the Telegraph says it is unclear whether the Old Trafford hierarchy would agree to his sale, while Marcos Rojo could also go.

Nasri West Ham move could be in doubt

It had seemed all but certain that Samir Nasri would be reunited with his former Manchester City boss Manuel Pellegrini at West Ham — but that may not be the case, according to the Mirror.

It reports that Nasri’s switch “is in danger of collapse amid concerns over his lack of fitness” after reports said he would sign an £80,000-a-week deal until the end of the season.

There are fears the 31-year-old midfielder “may not be ready to play by the start of January, when his ban for doping expires,” and that has left West Ham uncertain about bringing him in.

The Mirror adds that a final decision is set to be made this week, but says the deal “is in the balance when it had looked on course.”

– Newcastle “are in the box seat” to sign striker Salomon Rondon permanently when his loan from West Brom expires at the end of the season, the Chronicle reports.

Venezuela international Rondon scored twice as Newcastle beat Bournemouth, and the Chronicle says he is eager to extend his stay at St James’ Park.

Riedewald, who has not played for Palace in the Premier League this season, had been linked Swansea but Fener are now favourites.