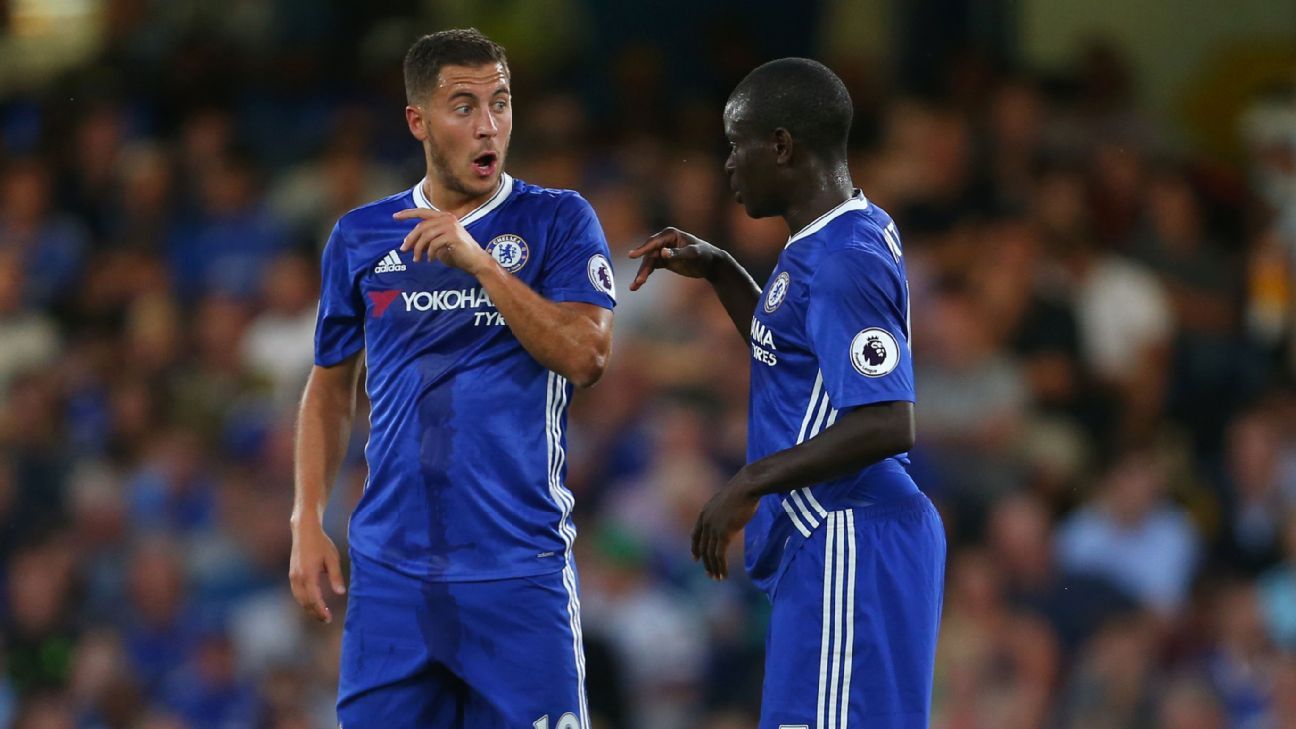 TOP STORY: Chelsea in fight to keep stars from Spain

After being thoroughly impressed by his performances at the World Cup, Barcelona have come to the conclusion that N’Golo Kante would be the perfect addition to their midfield ahead of the new season, according to the Sun.

The Catalan giants have already signed Brazilian schemer Arthur as a direct replacement for Paulinho, and they have now identified Chelsea destroyer Kante as the man to supplement their engine room.

While heavily linked with Paris Saint-Germain’s Adrien Rabiot last week, Ernesto Valverde also is mulling over the prospect of signing a tough-tackling anchor man like Kante to play in Andres Iniesta’s place, thus transforming the dynamic of his midfield.

Such a deal would require Barcelona pay big money to prize Kante from Chelsea, but they are hoping a swap deal including Andre Gomes could help grease the wheels.

Meanwhile, Maurizio Sarri has yet to officially start work at Chelsea and already he’ll have to fight to keep two of his most important players.

In addition to Barca’s interest in Kante, the Telegraph is reporting the new Blues boss has a job on his hands to convince Eden Hazard to commit his future to the club.

Barcelona and Real Madrid are reportedly sniffing around Hazard, who is yet to sign the new £300,000-a-week contract that Chelsea have offered to ward off any advances.

The 27-year-old is said to be interested in a new challenge, but it’s hoped that Sarri’s appointment, coupled with moves for Jorginho, Daniele Rugani and Aleksandr Golovin, will coax the Belgian winger into extending his stay at Stamford Bridge.

The Mail reports that Chelsea have identified Gonzalo Higuain as the man to lead their attack next season and are willing to include Alvaro Morata as a makeweight to get their man.

Higuain is valued at £53 million by Juventus, and the Blues are hoping that offering Morata in the negotiations will strengthen their bargaining position.

After Morata’s less-than-prolific debut season in the Premier League, Chelsea are willing to let the 25-year-old leave this summer, if they can recoup the lion’s share of the £65m they paid Real Madrid for his services.

However, Juve are open to selling Higuain for two reasons: to get his £240,000-a-week wages off the books; and to use the money from his sale to help balance the extravagant capture of Cristiano Ronaldo.

While Aleksandr Golovin has been strongly linked with Chelsea, reports emanating from Italy claim that West London club might face competition from Juventus for the Russian World Cup star.

They might have just spent more than €100m on Ronaldo, but Calciomercato cites unnamed reports that state that the Bianconeri aren’t finished with their summer spending quite yet and are keen to pip their Premier League rivals to sign Golovin from CSKA Moscow.

The report also suggests that the reigning Serie A champions might need to sell off a few of their fringe players quickly if they hope to raise the required cash and beat the Blues to the punch.

Inter in pole position for Malcom

Inter Milan are working hard to fend off Tottenham in the race to snap up Bordeaux’s Brazilian winger Malcom, according to the Times.

The Nerazzurri have offered £8.8m for an initial loan, with the option to sign Malcom next summer for a further £26.5m. Spurs also are said to be mulling an offer for the 21-year-old who Arsenal tried so desperately to purloin in January.

– Lille midfielder Yves Bissouma is on the verge of becoming Brighton’s record signing after the Premier League side lodged a £15m bid for the Mali international, the Mail writes. However, the French club are digging in their heels and holding out for £17.5m, secure in the knowledge that scouts from Everton, Tottenham and Schalke have all watched their man play in recent months.

– As well as Malcom, Inter also are planning to splurge on a couple of new full-backs in Sime Vrsaljko and Matteo Darmian, of Atletico Madrid and Manchester United respectively, reports Gianluca Di Marzio. Luciano Spalletti also has identified Spurs midfielder Mousa Dembele as a potential target, but things are on hold for the time being, as nobody is quite sure if the Belgian intends to sign a new contract at White Hart Lane.