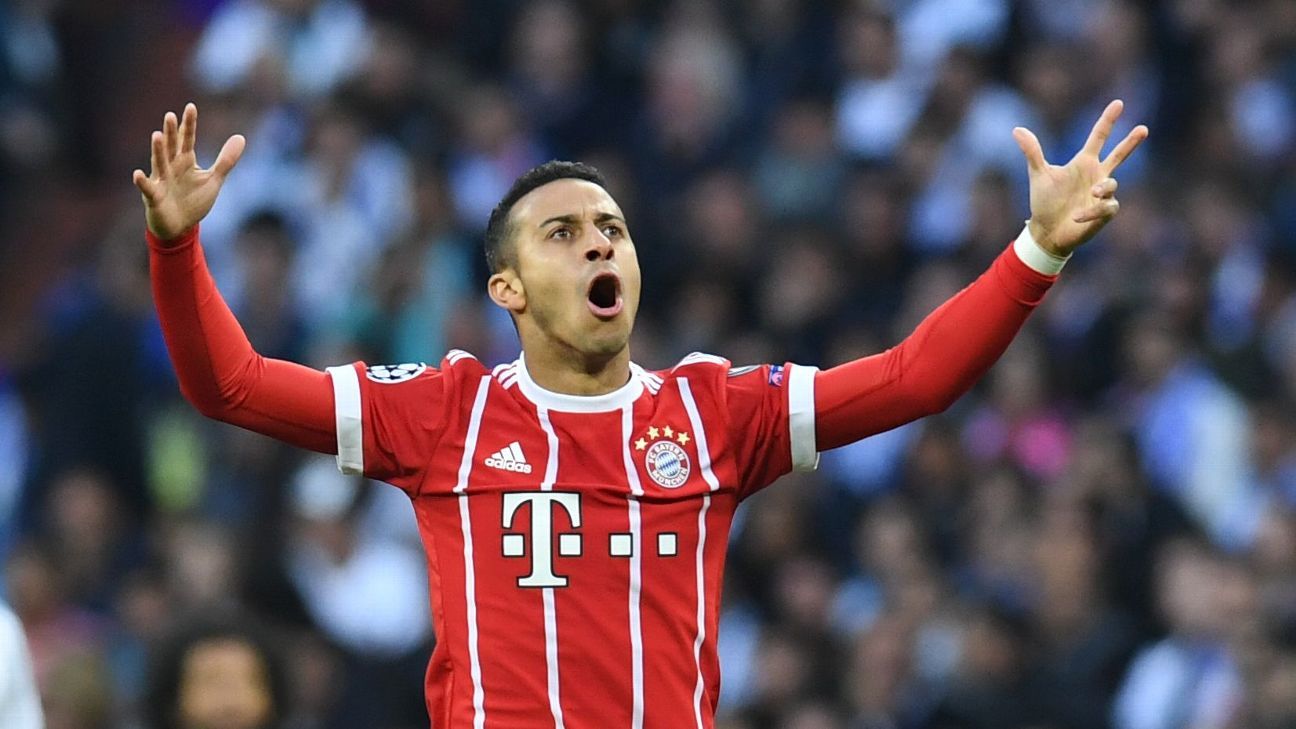 Barcelona and Real battle for Thiago

Thiago Alcantara will be the focus of Barcelona and Real Madrid as the Spanish giants go head to head for the Bayern Munich star.

The Spain international is currently in Russia for the World Cup, but after five years in Germany, Sport says he set for a move back to La Liga.

Sporting director Eric Abidal and Ernesto Valverde have agreed to sign a ball-playing midfielder and will move for Thiago to ensure he does not join their bitter rivals.

Should Real be unable to land Thiago, then N’Golo Kante could emerge as a priority.

Barcelona and Paris Saint-Germain are also interested, claims Le Parisien, with Kante likely to consider his Chelsea future after the club’s failure to qualify for the Champions League and the likelihood of Antonio Conte leaving the club.

Tuttosport reports that Juventus are lining up two major signings in the form of Sergej Milinkovic-Savic and a new striker: either Chelsea’s Alvaro Morata or Inter Milan’s Mauro Icardi.

The Old Lady have been busy already this summer, finalising five new signings: Joao Cancelo from Valencia, Emre Can on a free after his Liverpool contract expired, Mattia Caldara and Leonardo Spinazzola.

Gonzalo Higuain’s time could be coming to an end however, with Juve looking for a younger, more mobile forward to pair with Paulo Dybala.

Lazio will look to keep Milinkovic-Savic despite being unable to offer Champions League football, and Chelsea could be open to selling Morata after his struggles to adapt to the Premier League.

Meanwhile, Inter could be open to a deal for Icardi if they are able to receive Higuain in return, given the €110m release clause in their captain’s contract.

Manchester United have changed up their left-back target after failing to negotiate down a deal for Alex Sandro.

The Juventus star would cost £50m, and United feel they can get better value elsewhere in the form of Jose Luis Gaya.

The Valencia star, 23, will cost around £30m, claims the Mirror, as Jose Mourinho aims to solve a long-standing problem position.

Corriere dello Sport says a joint fee of €30m will said to be enough to convince the Zebrette to sell.

– Arthur will join Barcelona this summer after the Spanish champions paid an additional €3m to Gremio to bring forward the move that was initially planned for January 2019.

The total package is now almost €30m, according to Globo Esporte, with Financial Fair Play considerations meaning an announcement will not be made until July 15.

The Mirror reports the Toffees are at the front of queue for Loftus-Cheek, with Crystal Palace and Newcastle also vying for the World Cup star’s signature.

Wilshere will be available on a free after announcing he will not extend his stay with Arsenal.

– The Mail says Chelsea could use Alvaro Morata as a makeweight in a deal for United States international Christian Pulisic.