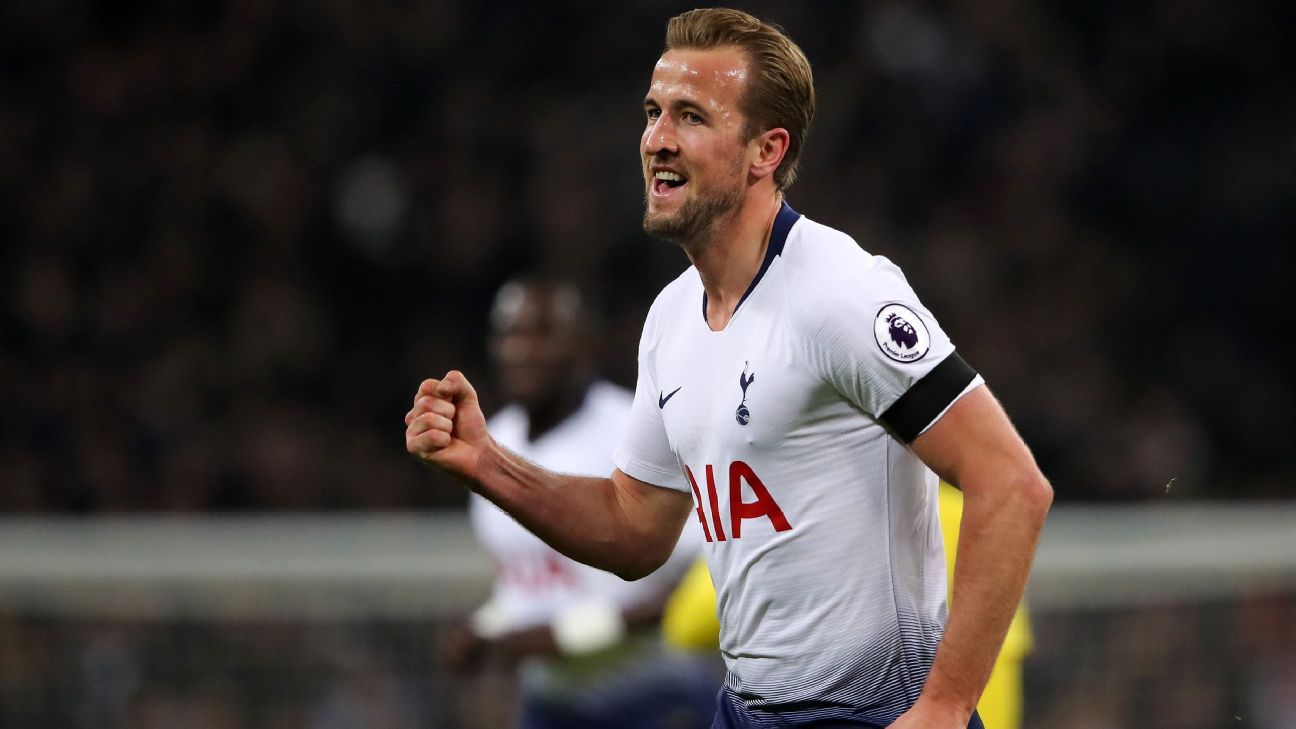 It is said that “timing is everything” and it is a phrase which springs to mind when reading The Daily Star’s report that Barcelona are desperate to land Tottenham’s Harry Kane — with the two sides set to meet in the Champions League this week.

“Star of X Team is a target for Y Team” seems to be a recurring report in the week leading up to Champions League clashes between said clubs these days — seemingly in a bid to unsettle the player before a crunch clash — and it has happened once again ahead of Spurs’ trip to Camp Nou on Tuesday night.

But when it comes to Harry Kane, it is easy to see why Barca may indeed want to land the World Cup Golden Boot winner. Kane has proven himself to be one of the world’s leading marksmen and with Luis Suarez and Lionel Messi getting older, the La Liga side will need to bring in striking reinforcements in the coming years. The Daily Star report Barca want to land Kane next summer in a deal worth around £200 million.

Paris Saint-Germain star Kylian Mbappe, Atletico Madrid’s Antoine Greizmann and Everton’s Brazilian forward Richarlison are also said to be on their radar but Kane is their number one target if the tabloid is to be believed.

Spurs must match Inter Milan’s result at home to PSV to qualify for the knockout stage of the Champions League, with Barca already assured of top spot in Group B.

Pep Guardiola is said to be furious with Manchester City’s hierarchy after they decided to put their potential move for Ajax’s Frenkie De Jong on hold, leaving Paris Saint-Germain to steal a march in trying to secure the rising star’s services — according to The Mirror.

It is claimed that Guardiola held a three-and-a-half-hour meeting with the midfielder in London last month and that City officials were set to fly to Amsterdam on Thursday to complete a deal with Ajax.

But with less than 24 hours until the meeting, it is claimed the English champions wanted to put the talks over the £66.8m transfer on hold. That left the door open and earlier this week it was claimed PSG had agreed terms with the 21-year-old. The midfielder’s agent has since dismissed a deal is in place, meaning there is still hope for City,

Barcelona and all the other clubs hopeful of landing one of Europe’s most sought-after players.

It was reported this week that Paris Saint-Germain may need to sell one of Neymar or Kylian Mbappe due to concerns around them satisfying Financial Fair Play but the club quickly dismissed those claims and today The Mirror report the Ligue 1 champions are actually looking to spend big once more, this time to sign Chelsea’s Eden Hazard.

French newspaper L’Equipe reported on Friday that PSG are discussing all their options due to UEFA’s investigation into the way the club have approached FFP, suggesting they may need to sell one of their biggest stars. But Ligue 1’s dominant force released a statement describing the report as “erroneous” and “ridiculous,” and called into question the publication’s “intellectual honesty and ulterior motives.”

The Mirror’s report states that PSG want to challenge the likes of Real Madrid and Juventus for Hazard’s signature.

Chelsea are desperate to retain their star man’s services and have offered him £300,000-per-week to stay at the club but he has so far refused to commit his long-term future to the club, with his current deal due to expire in 2020.

Manchester United have made Kalidou Koulibaly their top transfer target but The Times report the Red Devils have been told they must spend in excess of £90m if they want to land their man.

United officials met with his current club Napoli recently to discuss the potential transfer in January and owner Aurelio De Laurentiis made it clear they see Koulibaly as integral to their hopes of catching Juventus at the top of Serie A, with the lead currently standing at eight points, and would be reluctant sellers. Napoli are said to be under no financial pressure to sell the 27-year-old, who has been at the club since 2014.

United are one of the few clubs in world football who could afford the kind of money the Naples-based side want for the Senegal international and with centre-back a huge headache for manager Jose Mourinho, the fee may not put off the club’s hierarchy.

There is no denying that on his day Mesut Ozil is one of the best attacking midfielders in the world but The Sun report Arsenal are considering letting him leave the club on the cheap.

The German was the North London club’s record signing when they paid Real Madrid £42.5m to sign him in August 2013 but has struggled to get into the side under Unai Emery. But Ozil’s eye-watering wage of £350,000 a week is likely to put off many clubs and could be a factor in the Gunners reducing their asking price to around £25m, if reports are to be believed.

Inter Milan are said to be the side most interested in the World Cup winner and the player’s representatives are expected to fly to Italy this week to hold talks, with Juventus another side believed to be keen.

City not given up on keeping hold of Madrid-bound Diaz

Brahim Diaz has agreed to sign for Real Madrid if reports are to be believed but The Sun claim Manchester City are still trying to persuade the rising star to remain at the Etihad.

Diaz’s contract expires in 2019 and the 19-year-old has so far turned down City’s £25,000-per-week contract offers, which means from January he is free to agree a move to another club next summer. It is claimed Real have assured the midfielder he will receive more game time than at City and despite being able to get him on the cheap next summer when he is a free agent, they are willing to pay an £8m “gesture fee” in January.

The Sun claim that would basically mean Real would guarantee Diaz’s services next summer, with other clubs likely to target the talented Spaniard, and also take out the development costs which would be awarded at a tribunal.

England’s rising star Jadon Sancho, who also left City to secure more game time, is hoping to persuade his friend to reunite with him at Borussia Dortmund. But City have not given up on trying to keep Diaz beyond this season, with the player believed to want in the region of £35,000 per week.

It is well known Galatasaray’s Turkish centre-back Ozan Kabak is a target for Manchester United but the £20m-rated defender is also wanted by their closest rivals. It has been claimed the defender may have a €7.5m (£6.6m) release clause in his contract and he is wanted by several clubs across Europe.

Tottenham Hotspur are considering a move for Bristol City defender Lloyd Kelly but are expected to face competition from a host of clubs, including Manchester United and Liverpool. The 20-year-old is an England Under-21 international and even trained with the senior Three Lions squad earlier this season.

Tottenham are set to challenge Roma for the services of Feyenoord midfielder Tonny Vilhena. The 23-year-old has made 15 appearances for Netherlands and has a contract until 2020.

Cardiff City are considering a loan move for Everton striker Oumar Niasse. The 28-year-old is out of favour at Goodison Park, having not featured in a Premier League squad since mid-September.

Galatasaray are hopeful of signing Arsenal striker Danny Welbeck when his contract at Arsenal ends in the summer. The 28-year-old has struggled with injuries of late and would be available on a free transfer if the Gunners decide against giving the ex-Manchester United man a new deal.