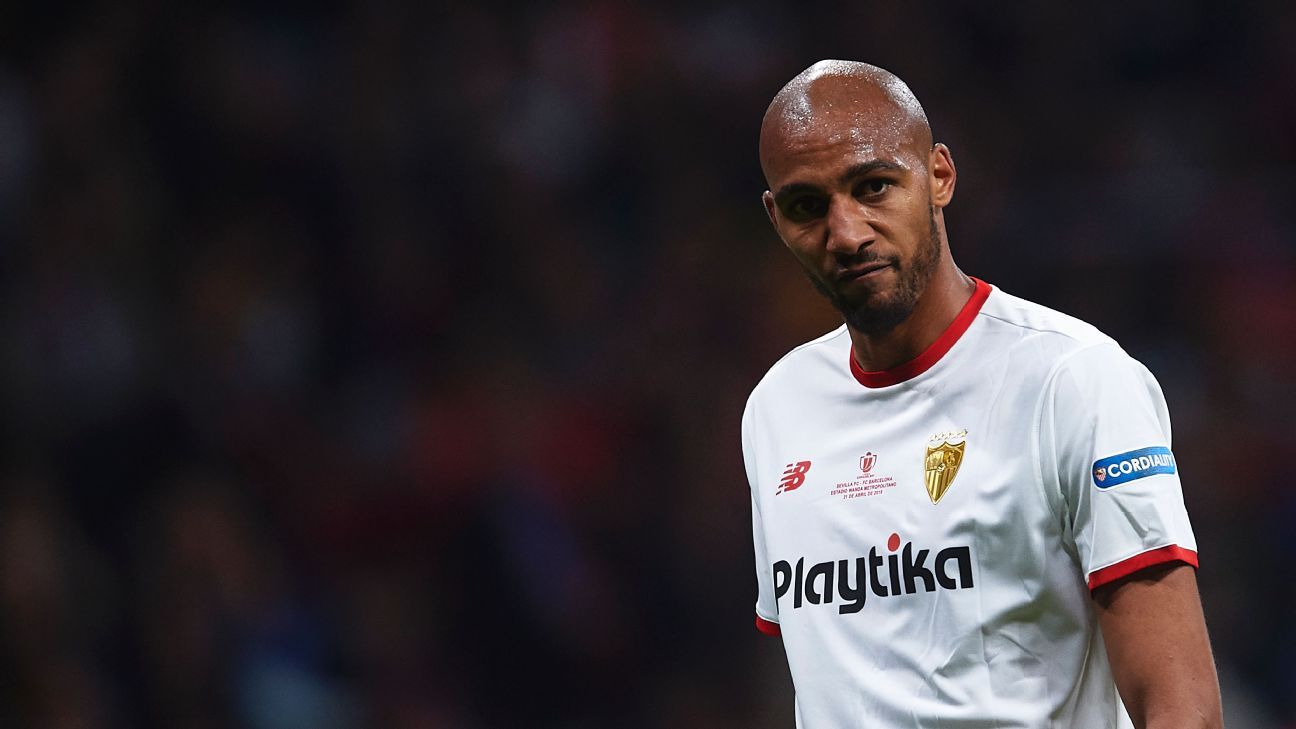 
The transfer window is open and Transfer Talk has the latest rumours making the rounds. Follow along with our daily blog throughout the summer.

Arsenal have a pair of moves in the works with the club hoping to complete the signing of Lucas Torreira from Sampdoria next week after the midfielder’s World Cup campaign came to an end on Friday. And the Gunners are also keen to move for a player who helped bounce Torreira’s side from the tournament in Russia with Sky Sports reporting that Sevilla and France midfielder Steven N’Zonzi is also on the summer wishlist.

Uruguay lost 2-0 to France in the quarterfinals, finally freeing up Torreira to undergo a medical with the Gunners. According to BBC Sport, the exact timing will depend on whether he chooses to fly straight from Russia to London to conclude the transfer or whether he returns home to Uruguay for some post-tournament R&R first.

N’Zonzi has featured regularly for France in Russia and new Arsenal boss Unai Emery will know what he’s in for with the 29-year-old having established a relationship with him after managing him during his time in charge at Sevilla.

23.00 BST: That will do it for Transfer Talk for tonight. Hope you have enjoyed the World Cup quarterfinals and remember to check back in a few hours for more of the latest rumours, links and completed deals from around the world of football. Goodnight!

22.50 BST: One big one to wrap up the day. As Cristiano Ronaldo moves closer to a potential transfer to Juventus, Real Madrid are set to have a big hole to fill and money to spend.

While Neymar and Kylian Mbappe have been linked to the club, a much more likely acquisition would be Lazio’s Sergej Milinkovic-Savic. The highly-rated Serbian midfielder is one of the hottest names on the transfer market and has been most linked with Madrid, Juventus and Manchester United.

He has claimed that Madrid has told him that they would spend €155 million for his client after they sell Ronaldo.

Milinkovic-Savic at 23 is a top talent but €155m seems like an awful lot of cash. Then again, football transfers are completely out of control these days.

Milinkovic-Savic is likely on the move will it be Madrid? We will have to wait and see.

22.20 BST: Are Birmingham be close to identifying their next No. 1 goalkeeper?

BirminghamLive understands that Ipswich Town’s Bartosz Bialkowski is now a target for Birmingham.

Garry Monk and Co. are in search of a new No.1 and the 31-year-old Pole would be seen as an upgrade on David Stockdale and Tomasz Kuszczak, who have both given the go ahead to leave the club.

21.43 BST: West Ham have been one of the busiest Premier League teams this summer, as the club tries to rebuild in the image of new manager Manuel Pellegrini.

With three signings completed and others reportedly close, West Ham, according to reports in Paraguay, are close to finalising a deal for Paraguayan defender Fabian Balbuena.

The 26-year-old centre-back currently plays for Corinthians in Brazil and according to the reports from Paraguayan newspaper ABC Color just needs to agree to personal terms with the Hammers.

21.15 BST: With recent rumours linking Chelsea’s David Luiz with a move back to Portugal, the Brazilian has adamantly ruled out one club.

Luiz via his Instagram story had the following to say about FC Porto.

“The history of FC Porto is more of a newspaper lie, the same ones that ask for interviews many times !! Haha. BENFICA always in the heart !!!”

Seems like it safe to say Luiz will not be joining his former club’s rivals anytime soon.

20.49 BST: According to the Stoke Sentinel, the Potters are moving closer to signing West Brom and Republic of Ireland winger James McClean.

The 29-year-old has played in England since 2011 with Sunderland, Wigan and West Brom and has become a key member of the Irish national team under Martin O’Neill.

West Brom were reportedly originally asking for £6 million for the player but according to the Sentinel, the two sides are now close to agreeing on a price.

20.16 BST: — DONE DEAL — Torino goalkeeper Salvatore Sirigu has signed a new contract with the club that will see him stay in Turin through 2022.

the 31-year-old Italy international has bounced around in recent years since leaving PSG but now has a place to call home for the foreseeable future.

19.42 BST: — DONE DEAL — Here’s one for our United States followers. Man City and USMNT centre-back Erik Palmer-Brown has sealed a loan move to NAC Breda for next season.

PSG have been linked with the human energiser bunny and according to Goal.com are preparing a £100 million bid for the former PFA Player of the Year.

PSG have been persistent in their approaches for the France star but any sale of the midfielder this summer would come as a huge surprise.

If Chelsea did sell Kante, Lyon’s Tanguy Ndombele is a player Chelsea could be interested in.

The underage France international plays a similar role to Kante and at just 21, is a player already attracting interest from Premier League rivals like Arsenal, Man City and Tottenham.

The Senegal international has remained coy on those links, telling reporters in his hometown that “Real are a great team, but I am focused on my team, Liverpool.”

Mane went on to say that he will be attending preseason in the U.S. with the Reds but a Ronaldo sale could see a lot clubs scrambling to protect their top players.

18.11 BST: With West Ham’s talks with Lazio’s Felipe Anderson hitting a snag, the London club have made a bid for a new target.

DiMarzio claim that the Hammers have made a €20 million (£17.5m) bid for Borussia Dortmund attacker Andriy Yarmolenko.

17.40 BST: While everyone else was transfixed by England’s World Cup campaign Mainz were busy signing France under-21 defender Moussa Diakhate from Metz.

The France U21s international signs for the club on a five year deal from @FCMetz! Bienvenue, Moussa! #UpTheMainz pic.twitter.com/MVGBCwPuFt

17.15 BST: Apologies for the unexpected interlude… something came up.  Normal service will be resumed shortly. ��

Alen Halilovic trained at Milanello today, together with Fabio Borini and some #MilanYouth players 🏃🏼‍♂
Check out the best pics from the Rossoneri first day of physical tests 📸👉🏻 https://t.co/0gCDI0wzwF#welcomeHalilovic pic.twitter.com/5jI48yxY6w

Gerrard said: “At the moment he is still a Roma player but it has been well documented that I am a fan, but it’s just a case of watch this space.”

14.29 BST: Jurgen Klopp has hinted Liverpool remain on the lookout for new signings.

“I am happy,” Klopp told LFCTV. “The work is going on and why should we stop until the window is done?

“It is all good but we will see what happens. If all the players come back healthy from the World Cup, then we already have a really good team and that is all I need to know.

13.55 BST: Burnley like the look of relegated West Brom pair Jay Rodriguez and Craig Dawson, according to The Mirror.

13.23 BST: Winger Ben El-Mhanni is set to leave Newcastle on a free transfer and the Daily Mail reckons Benfica and Lazio are leading the chase for the 22-year-old.

12.58 BST: AC Milan sporting director Massimiliano Mirabelli has that striker Nikola Kalinic has held talks with Atletico Madrid and Sevilla regarding a transfer.

“We have many top players and some of them have received a few offers,” Mirabelli said. “Kalinic is also wanted by many clubs, Atletico and Sevilla are the closest teams right now.”

12.20 BST: Now that Arthur’s move to Barcelona is underway earlier than expected, Paulinho could be the man to make way.

“I’m going to Barcelona to talk to my representative about this matter,” he told reporters following Brazil’s World Cup quarterfinal defeat against Belgium. “I have an offer from China and another from another club, although it is not certain that I will go. We have to talk.”

11.40 BST: Arsenal are now all set to wrap up the signing of Sampdoria midfielder Lucas Torreira before he returns to Uruguay following their World Cup exit, Football London reports.

DONE DEAL 🤝 | Swindon Town are delighted to announce the signing of @FulhamFC striker, Elijah Adebayo on a season-long loan.

11.00 BST: Sheffield United could make a move to sign Aston Villa’s former Brentford striker Scott Hogan on loan, the Birmingham Mail reports, while Villa are among a number of teams keen on a loan move for Liverpool winger Harry Wilson.

10.40 BST: And staying with West Ham, he may have left in acrimonious circumstances but Football London reports that Dimitri Payet “has been sensationally offered the chance to return to East London by both his agent and Marseille as the French club need to raise funds,” with Hammers boss Manuel Pellegrini said to be considering a move.

10.15 BST: Jack Wilshere could be a West Ham player by the time they play League One Wycombe in a friendly next week, according to the Times. It reports that the former Arsenal midfielder has started a medical and been offered a three-year contract.

09.30 BST: Sydney FC are on the hunt for ex-Spain striker Fernando Torres after they confirmed the departures of marquee striker Bobo and Johnny Warren Medallist Adrian Mierzejewski.

“We have some very exciting targets who we are talking to and I’m looking forward to bringing in more quality to an already experienced and talented squad,” recently appointed Sydney FC coach Steve Corica said on Saturday.

Spanish star Torres is considering his options after calling time on his second spell at childhood club Atletico Madrid at the end of last season.

The “Bottega del Goloso” in the village of Vinovo, which has been home to Juventus’ training centre up until the coming season — when the first team will move into a new centre adjacent to the Allianz Stadium — has launched the “CR7 Cup” ice cream in anticipation of the Portuguese forward’s arrival at Juventus.

08.30 BST: Manchester United are signing a Barcelona player, according to Sport and it’s the son of Manchester City coach Fran Gonzalez. Nico Gonzalez may only be 16, but he’s highly rated.

Despite joining Southampton as something of a marquee signing in 2015, Jordy Clasie has endured a bit of a nightmare in the Premier League over the past three seasons.

After tumbling down the pecking order at St Mary’s, Clasie spent the entire 2017-18 campaign on loan at Club Brugge, where he won the Belgian Pro League title.

However, with two years left to run on his Saints contract, the Dutch midfielder is hoping that one of his former employers will step in to save him from his torpor.

Indeed, The Sun are reporting that Feyenoord are keen to re-sign Clasie as a replacement for star playmaker Karim El Ahmadi, who has just agreed a deal to join Saudi Arabian club Al Ittihad.

We suspect a deal can’t come soon enough for both parties.

– Out-of-favour Barcelona striker Paco Alcacer may have found a new home in the Premier League with Sport reporting that Everton are interested in the Spaniard’s services. Alcacer never fully settled at the Camp Nou and now the Barca board are hoping to recoup as much of the €30 million they paid to Valencia to bring him to the club in 2016.

– Bild are reporting that Bournemouth, Watford and Burnley are all interested in signing Borussia Monchengladbach striker Josip Drmic, who made three appearances for Switzerland at the World Cup and is likely to cost around €5m.

– Chelsea are in the midst of re-signing Portuguese goalkeeper Eduardo, almost exactly one year after releasing him, says The Sun. The 35-year-old veteran is expected to be immediately sent out on loan to the Blues’ affiliate club Vitesse Arnhem.