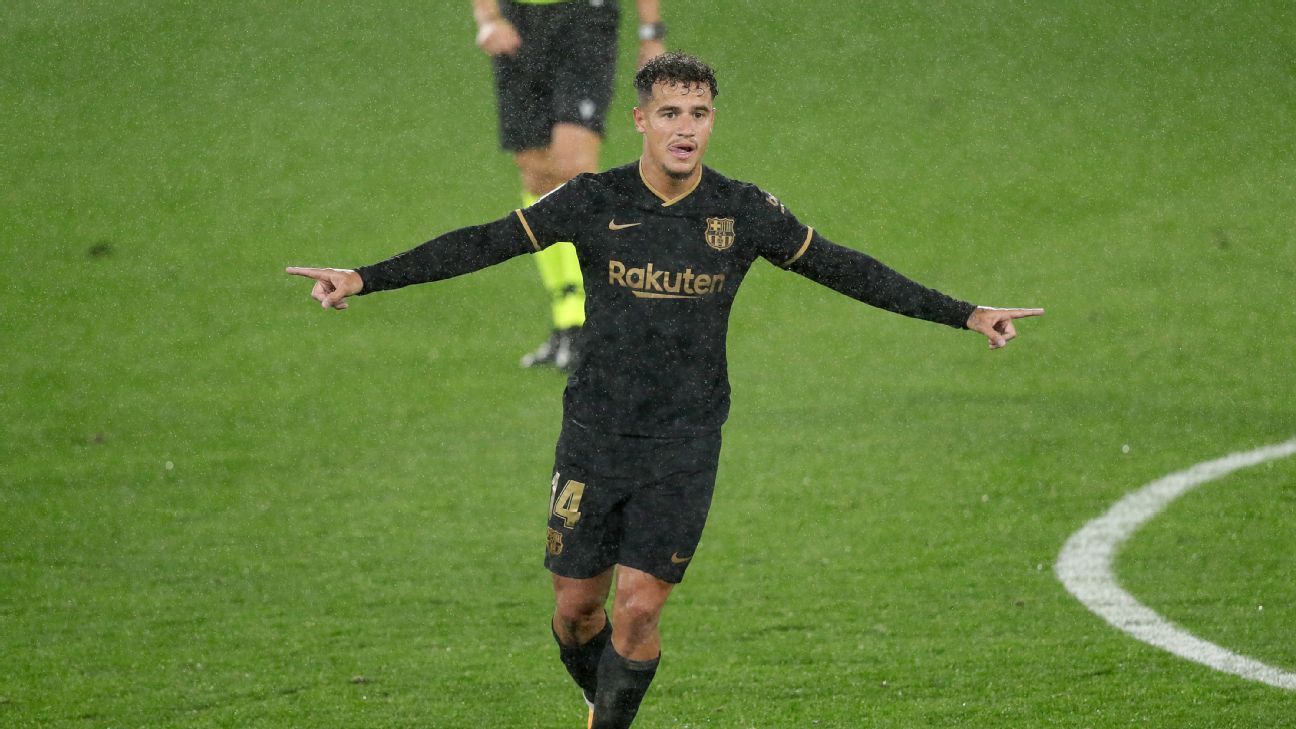 TOP STORY: Coutinho could be Arsenal‘s Plan B to Odegaard

The Daily Express believes Arsenal are considering Philippe Coutinho as an alternative to Martin Odegaard if the Gunners are unable to keep hold of the on-loan Norwegian player beyond the end of this season.

Arsenal boss Mikel Arteta is hoping he can make the 22-year-old’s stay in North London a permanent one, such has been the influence of the burgeoning No. 10. Odegaard has been a revelation since joining from Real Madrid on loan in January, scoring two goals and adding a much-needed creative presence in Arsenal’s midfield.

However, Odegaard might still have a future at the Bernabeu, particularly if Zinedine Zidane was to leave the club as manager in the summer.

Arsenal are considering a Plan B, though, and Coutinho’s transfer fee could be as little as £35 million, if Spanish newspaper Sport is to be believed. The Brazilian has played just 12 games in La Liga for Barca this season, but he made 99 goal contributions during his 201 appearances for Liverpool before joining Barca three years ago.

The 28-year-old also was a regular for Bayern Munich last season, scoring three goals and offering three assists in 11 matches in the Champions League as Bayern went on to lift the title. A move for Coutinho would certainly be welcomed by Barca, who are keen to move free of his hefty salary.

*NOTE: Odegaard exited Norway’s World Cup qualifier with Gibraltar on Wednesday with an injury, but the severeness of that injury has not been determined at the time of publishing.

– Liverpool goalkeeper Adrian is considering a return to Real Betis at the end of the season, with the Spanish club targeting him as a replacement for veteran Claudio Bravo. That’s according to La Razon, who believe that while Betis have already signed Granada‘s Rui Silva, 34-year-old Adrian would be a straight replacement for Bravo, who has been linked with a move to Colo-Colo in his native Chile.

– It seems every manager of a big club across Europe is doing everything they can to lure top striker Erling Haaland to their club, with the Mirror claiming Manchester United‘s Ole Gunnar Solskjaer is calling the 20-year-old every day. Solskjaer is hoping his Molde connections can help him convince his countryman to move to Old Trafford, though the Red Devils boss faces competition from a host of clubs including Chelsea, Manchester City, Barcelona and Real Madrid.

– Eric Garcia‘s move to Barcelona is done, says Sport, who believe the 20-year-old central defender has already agreed to a five-year deal that will be made official at the end of the season. Barca have accepted the terms of the deal agreed in January and will formalise it in April. Barca had previously tried to sign the former La Masia graduate last summer but refused to pay the €20m asking price.

– Liverpool are considering a move for 31-year-old Real Madrid defender Nacho, according to AS. Juventus and Roma also are interested, with the latter reportedly having already made two approaches. Liverpool’s season has been beset by injuries to key defensive players such as Virgil van Dijk and Joe Gomez, and Fernandez is seen as an experienced player and model professional who would provide excellent cover.

– Real Madrid are open to the idea of bringing Cristiano Ronaldo back to the club this summer, but the Juventus striker would have to accept a pay cut, reports AS. The 36-year-old Portuguese star also is reportedly keen on a reunion, and though Madrid could afford the alleged €25m asking price, AS writes that his salary of €31m a year would need to be reduced by around €6m a year.

– Thiago Silva is set to sign a one-year extension to his Chelsea contract, according to the Sun. The 36-year-old central defender joined the Blues from Paris Saint Germain last summer and has impressed during his time in London. Thomas Tuchel has made no secret of his plans to keep the experienced Brazilian player at Stamford Bridge, the duo having previously worked together at PSG.

If Man United finish off Roma and go on to win the Europa League, it would back up Solskjaer’s claim that he’s the right man for the job
Roma cause a shock as Jose Mourinho appointed manager
Man City, on brink of Premier League title, are already laying down a marker for the next one
Switching between first and second teams not easy
Man United target Sancho can leave Dortmund for €100m