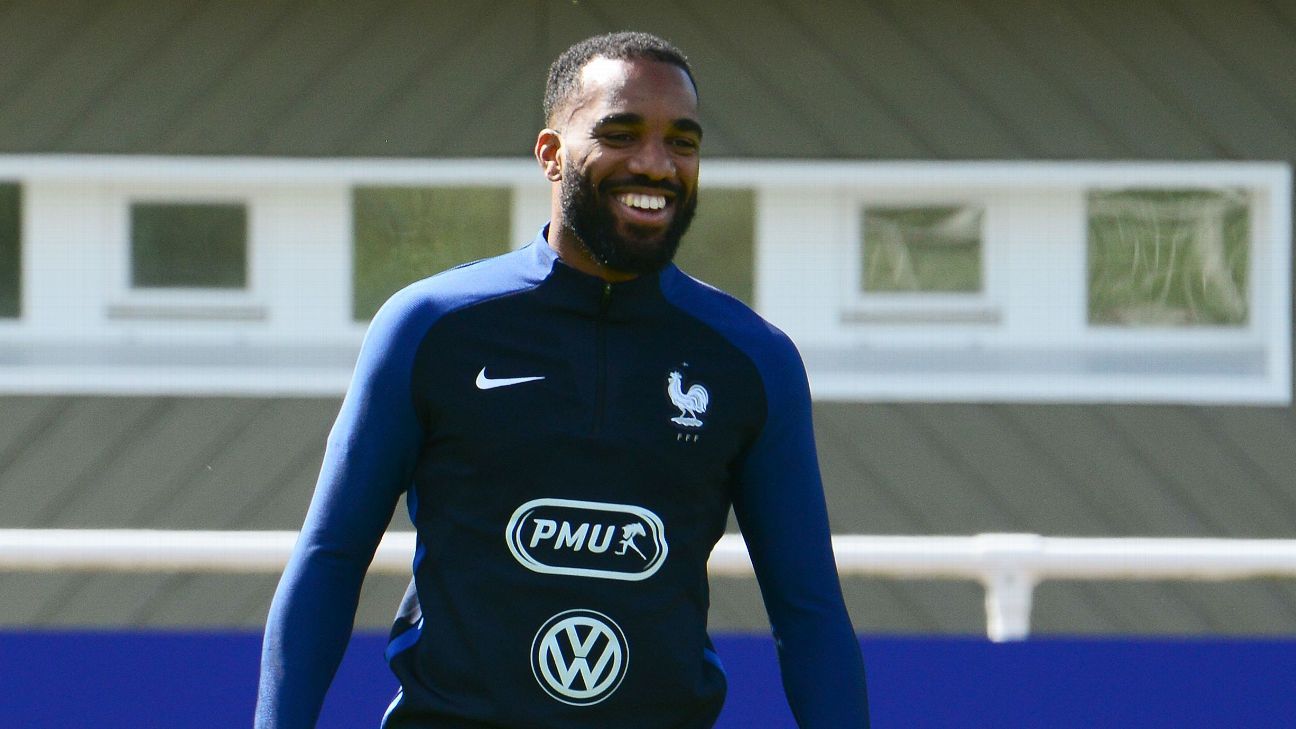 The Guardian and Sky Sports both report that Arsenal are close to agreeing a club-record deal to sign Alexandre Lacazette from Lyon that could see them pay around €50 million up front.

The Guardian reckons the total fee rises to €65m with add-ons. It is reported that positive talks have taken place between the clubs over a transfer, and Arsene Wenger hopes to complete the signing soon.

The Mirror is slightly less upbeat, saying Lyon have rejected a bid but talks are continuing, and quotes the French club’s president, Jean-Michel Aulas, as saying: “At this moment, we have not reached an agreement with Arsenal for Alexandre Lacazette.”

Even so, a deal appears to be in the offing that would significantly exceed the £42m paid to Real Madrid for Mesut Ozil.

The 22-year-old has signed a five-year extension which ties him to the Rojiblancos until June 30, 2026.

Poland under-21 international Bednarek has agreed a five-year contract and will link up with his new teammates when he returns from international duty at the European Under-21 Championship.

12.15 BST: DONE DEAL To the Championship for a done deal, with midfielder Josh Scowen signing a three-year contract at QPR after leaving Barnsley. Manager Ian Holloway told the club’s official website: “It’s a great first signing for us and I couldn’t be happier.”

12.05 BST: Jose Mourinho is not a happy man, according to the Sun, which reports that he is “frustrated by Manchester United’s lack of activity in the transfer market.”

It says that “just a week before the players report back for training and then a preseason tour to the United States, he has landed only one of his four targets,” with Victor Lindelof having arrived earlier this summer.

11.43 BST: For quite a while now, Chelsea boss Antonio Conte has been looking to bring in an experienced defender, and now Sky Sport Italia reports that he is on the brink of doing so. IT says the Premier League champions have agreed a £33.4m deal with Roma for the Germany centre-back, who will have a medical in London on Monday.

11.37 BST: Alberto Moreno could be on his way to Napoli, the Liverpool Echo, citing reports in Italy, says. Napoli had a bid for Liverpool defender Moreno rejected last month, but the Echo says “it is expected that there will be further interest.”

11.31 BST: Southampton defender Jack Stephens has signed a new five-year contract with the south coast club after breaking into the first team last season. Stephens, 23, told the club’s official website he was “absolutely delighted” and added: “It feels like home to me.”

11.20 BST: DONE DEAL A done deal from Germany for you now, where Stuttgart have signed Anastasios Donis from Juventus. The Greece international played on loan for Nice last season, and can operate either out wide or as a central striker.

10.57 BST: DONE DEAL Exeter City have said they are in negotiations with Chelsea over a fee for teenager Ethan Ampadu after the 16-year-old signed a deal with the Londoners.

The League Two club said on their official website: “Ethan, who made 13 appearances for City’s first team last season, was free to talk to other clubs having yet to sign scholarship forms at St James Park.

“As a result, there is no transfer fee. However, being a product of the Exeter City Academy, and under the age of 24, the Grecians are entitled to compensation and it is hoped that a fee for that can be agreed between Chelsea and Exeter City without the need to go to a tribunal.”

�� | Exeter City in negotiations with @ChelseaFC after @ethanamp4 agrees deal with @premierleague champions#ECFChttps://t.co/n8CrbKSC1U

10.50 BST: Sky Sports reports that West Ham are in negotiations over the signing of French striker Anthony Modeste from Cologne. The Londoners are prepared to pay £20 million, but Sky reports that they turned down the chance to sign him for a far more modest £6m last summer.

10.34 BST: Paris Saint-Germain defender Marquinhos has extended his contract by three years, keeping him at the club until 2022. His previous deal had been due to run until 2019, but reported interest from clubs including Manchester United, Barcelona, Chelsea and Juventus convinced PSG to secure his future.

10.27 BST: Huddersfield will break their transfer record to secure Steve Mounie‘s signature from Montpellier for £11m, assuming everything goes right with his current ongoing medical, according to the Mirror.

10.02 BST: Crystal Palace have abandoned plans to re-sign Mamadou Sakho on a permanent basis after Liverpool set a £30m fee, according to the Mirror. Palace boss Frank de Boer is said to be looking for cheaper alternatives, including £10m-rated Joel Veltman from Ajax.

09.30 BST: Manchester United could still sign Ivan Perisic for their preferred price of €30m, Goal suggests. The website says the Croatia international has given his agent the go-ahead to make his potential switch from Inter Milan to Manchester United happen.

09.11 BST: DONE DEAL That didn’t take long — Watford give us our first done deal of the live blog with the signing of Austria under-21 international goalkeeper Daniel Bachmann on a three-year contract. He’d previously been at Stoke.

09.01 BST: Good morning. The transfer window opens up today, so welcome back to Transfer Talk live. To get you up to speed, we’ve gone through the biggest Premier League deals to be completed today here and the biggest deals across Europe here.

Manchester United are keeping tabs on Celtic left-back Kieran Tierney, the Mirror claims, but Jose Mourinho has more pressing matters to address and a move may not be imminent.

Tierney, 20, has four years left on his contract, and Celtic are keen to keep him for at least one more season. Given that he plays regularly for Brendan Rodgers’ side and is involved internationally for Scotland too, it may be in United’s interests to leave the £15 million-rated player where he is.

Rival interest from Arsenal means United will have to manage the situation accordingly, but they have scouted Tierney on a regular basis and liked what they saw of the youngster.

As Lionel Messi prepares to marry Antonella Roccuzzo this weekend, there is also good news about his future on the pitch, with the Independent claiming he will commit his future to Barcelona by signing a new long-term contract before the end of July.

Messi is due back for preseason training with Barca on July 12, at which point the details of his new deal will be finalised and announced. To get to this point has taken a long time, but it is reported the Argentina international never had any intention of leaving the club and was relaxed regarding negotiations.

Messi, who recently turned 30, has less than a year remaining on his current contract, and this could be his final deal due to a desire to end his career playing for Newell’s Old Boys in Argentina.

According to the Mirror, Joe Hart looks set to go on Manchester City’s preseason tour of the U.S. despite not featuring in Pep Guardiola’s plans.

Hart, who has said he is yet to receive any offers to leave City, will be the club’s only senior backup option to Ederson Moraes with Willy Caballero released, Angus Gunn on loan and Claudio Bravo given a break following the Confederations Cup. His involvement in the tour could interrupt any hopes he had of quickly finalising a move.

It is reported that City value England international Hart at £25m, another factor that is putting off clubs from attempting to sign him.

– The Mirror says Leicester want to move fast to complete the £20m signing of Manchester City striker Kelechi Iheanacho in order to ensure they don’t lose out to Southampton or West Ham. The 20-year-old will be allowed to leave City this summer as Pep Guardiola overhauls City’s squad.

– Roma defender Antonio Rudiger will have a medical with Chelsea next week after a €38m fee was agreed between the clubs for his transfer. The Guardian reports that the Germany international, who can feature at centre-back or right-back, will earn €4m a year in the Premier League. His capture will bring to an end Antonio Conte’s long search for a central defender that has seen Chelsea linked with Virgil van Dijk, Leonardo Bonucci and Kalidou Koulibaly.

– West Ham’s attempts to break their transfer record by signing strikers Anthony Modeste or Cedric Bakambu have failed. The Telegraph claims that €25m bids were lodged for both players, but Cologne and Villarreal have rejected the offers. The Hammers have also been linked with Arsenal’s Olivier Giroud with co-owner David Gold saying earlier this week they are desperate to sign a new striker.