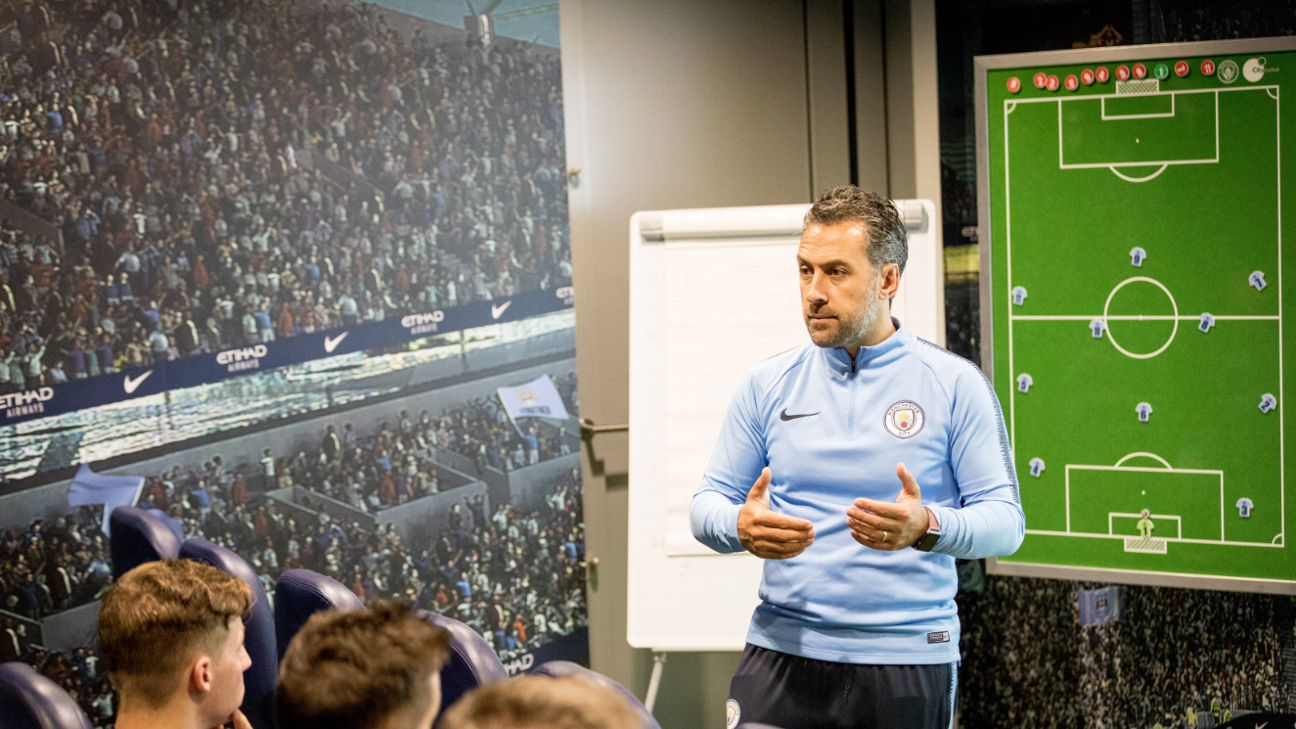 
“When I have the ball, I have the chance to score a goal,” Pep Guardiola once said, explaining why all the teams he has managed place such emphasis on keeping the ball. Last season, Manchester City set a Premier League record for possession and that transferred itself more league-high marks, including points (100), goals (106) and winning margin (19 points).

While the philosophy might be simple — Get the ball, keep the ball, pass the ball and when the time is right, score — there is much more to what Guardiola and his coaching staff do. From poring over opposition to find weaknesses, studying their own players and working on tiny specifics in training drills to prepare for upcoming fixtures, nothing is left to chance.

“All Or Nothing,” the new documentary on Amazon Prime, will expose some training ground and dressing room secrets that are often kept secret. But what is it like to work under Guardiola’s staff? Ahead of the new season, I was among media members given the chance to be a City player for the day and, at close quarters within the Etihad Campus, experience that mixture of simplicity and obsession.

The day begins with a tactical debrief in the comfort of a leather-seated lecture theatre. Refreshingly, among the high-tech training equipment, there is a magnetic white board with pitch markings and checker pieces for players to push around, a familiar sight in any coaching room at any level. However, a large TV screen is the simplest way to get the message across.

Like most Premier League clubs, City position cameras high in the stands to give a panorama view of the pitch so every area can be viewed when picking over attacking or defensive plays. On matchdays, the video analysis team are able to pick out moments and quickly relay them to Guardiola’s coaching staff so they have real-life examples to talk players through. Similarly, training sessions are also recorded for analysis; even at youth level, coaches wear GoPro cameras so they show players what happened during a particular incident.

Our session looks back at what has been successful for the first team, with the emphasis on how Guardiola’s principles have created a well-drilled machine. For example, there’s the opening goal of a Carabao Cup third-round victory vs. West Brom, in which City kicked off, completed 52 passes over a two-and-a-half minute with every player touching the ball, before scoring without an opponent having a kick.

The wider perspective makes it easier to appreciate how every player is constantly on the move, from the runs and fakes from forwards Leroy Sane and Gabriel Jesus to the number of occasions that central defenders Eliaquim Mangala and John Stones break the lines with passes and the patience and awareness of Ilkay Gundogan and Yaya Toure in midfield.

Then there’s the brilliant one-touch passing, under a high press from Arsenal, which led to a brilliant Sane goal that set up a March win at the Emirates. Also highlighted were the pressing tactics that led to Swansea giving the ball away and conceding a penalty in a 5-0 City victory the following month. The coaches pick out four or five players to show they are in the right position to force the error.

Guardiola might have been reticent to talk about his influence on English football but his staff point out that the City players at the World Cup took what they had learnt during the season to Russia. When Harry Kane came close to giving England a 2-0 in the semifinal defeat vs. Croatia, it is noted that Sterling, who scored 23 goals last season, was available in the right position had the ball been played square.

After a healthy footballers’ lunch of chicken, vegetables, fruit, yoghurt and water, it is onto the pitch and immediately the footballs are out. Movement, touch and awareness are key at all times but a constant feature of the 90-minute session is the ball.

City’s first team, be it on the training ground or in a prematch warm-up spend a lot of time on “rondos,” a drill that sees a circle of players with the ball and one or two in the middle trying to win it back. The focus is on building shapes to pass the ball around the opponent and moving sideways to create a triangle of options in order to maintain possession, or a diamond to split the lines with a pass through the centre.

It is basic stuff even for a player who is a long way from having the touch or fitness of Kevin De Bruyne or David Silva, but offers a perspective into the Guardiola plan. Everyone, from Ederson as goalkeeper to Sergio Aguero as striker, understands their role in making themselves available.

“The reason football players became football players is because they enjoy playing with the ball and I want them to remember what it was like when they were young players,” Guardiola has said when discussing his strategy.

The principle adopted during a half-pitch game. Players receiving the ball are encouraged to get their body into a position to see three corner flags, thus making it easier to identify who is available for the next pass. Moreover, despite the talk of tiki-taka, if a player is able to beat a man, they are told to do so. Sadly, I was not able to pull it off!