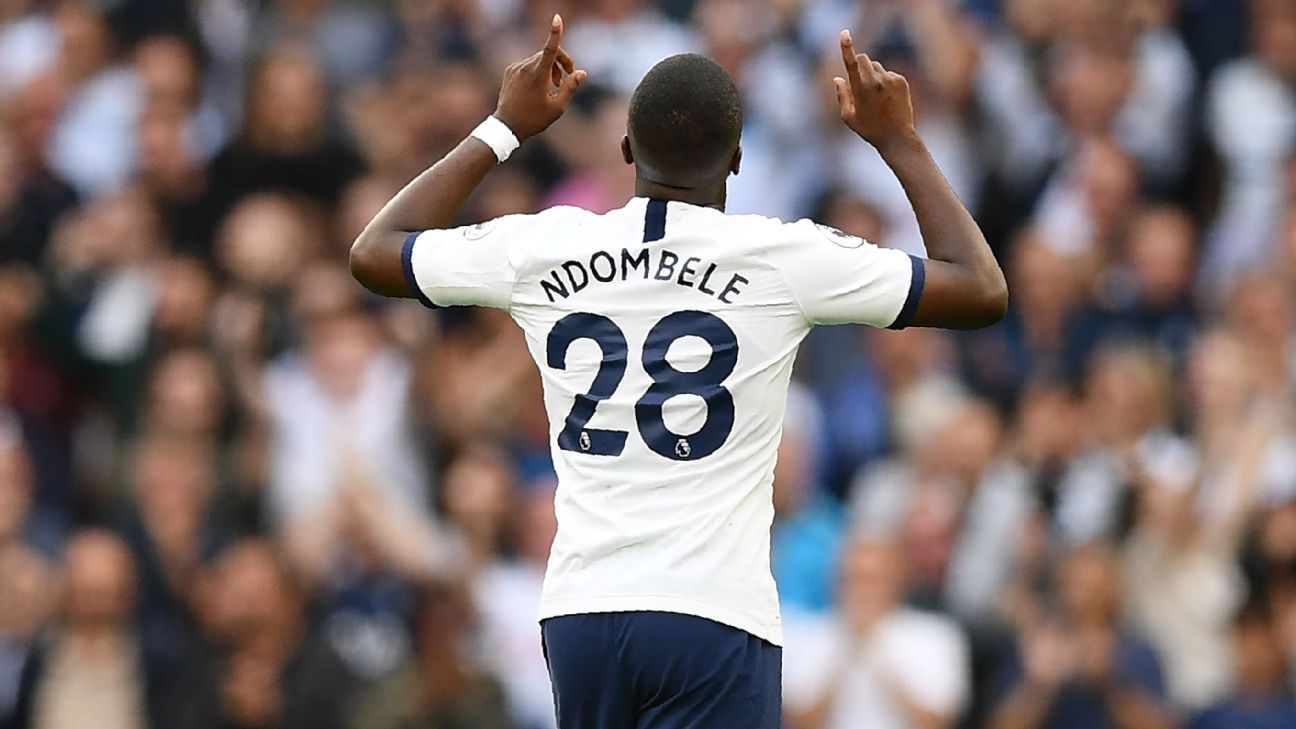 According to the Daily Telegraph, Juventus are keen on the Frenchman and were willing to include former Arsenal midfielder Aaron Ramsey as part of the deal.

Ramsey moved to Turin on a free transfer in a deal worth around £400,000-a-week in wages but has been made available by Juve this summer after failing to cement his place in the team. Juve recently signed midfielder Arthur Melo in a €70m swap deal with Barcelona which included €60m worth of Miralem Pjanic, and had designs on doing the same to move on Ramsey.

Unsurprisingly, Spurs weren’t that keen on the ex-Gunner. Though we’ll await news of a further offer from Italy.

11.23 BST: ICYMI – Arsenal’s Pierre-Emerick Aubameyang has requested a minimum three-year contract worth up to £250,000-a-week to stay at Arsenal, sources have told ESPN’s James Olley.

The 31-year-old has entered the final 12 months of his existing agreement with talks underway over an extension after a delay in negotiations due to the coronavirus pandemic.

11.03 BST: The Athletic reports that Liverpool are set to lose £60m by failing to sell Xherdan Shaqiri, Harry Wilson and Marko Grujic.

The coronavirus pandemic has hit football club finances and the Reds were looking to move on some of their fringe players to raise cash. But they will keep them for another year instead, and choose not to spend big on a major star.

10.05 BST: Manchester United want Dortmund’s Jadon Sancho, but would he improve them?

09.47 BST: Bayern Munich midfielder Thiago Alcantara is set to leave the Bundesliga side in the close season because he wants a new challenge, the club’s CEO Karl-Heinz Rummenigge has said.

The 29-year-old, who joined Bayern in 2013 from Barcelona for €25m, has since played 230 games and won seven league titles with the German champions. Premier League champions Liverpool have been linked with a move for the player.

“A top man on and off the pitch. We negotiated with him in a serious way and fulfilled all his wishes. But it now seems that he wants to do something new for one more time,” Rummenigge told Bild in an interview on published on Friday.

Thiago’s deal with Bayern ends next season and Rummenigge said they had no choice but to sell the player as they did not want to let him go without receiving a transfer fee: “We do not want to lose any player without any money next year.”

09.34 BST: AC Milan midfielder Ismael Bennacer is on the radar of Manchester United and Manchester City.

Algerian outlet Competition reports that the 22-year-old former Arsenal midfielder is open to a move this summer and has caught the eye of two of the biggest clubs in England.

French champions PSG have already had a reported €40m offer rejected but the Algerian could be signed for an extra €10m.

09.00 BST: Lyon have reportedly put striker Moussa Dembele up for sale, according to L’Equipe.

Dembele, 24, has been a star at the club and has been linked to various top clubs including Manchester Unied and Arsenal. Lyon, who missed out on Champions League football when the Ligue 1 season was ended due to the coronavirus pandemic, want around €50m for him.

Frank Lampard has been handed a major boost in his pursuit of Bayer Leverkusen‘s Kai Havertz, with Bayern Munich ruling themselves out of the race for the in-demand attacking midfielder, according to Bild.

Havertz forms a big part of Chelsea’s rebuilding plans for next season. With Hakim Ziyech signed from Ajax alongside Timo Werner from RB Leipzig, Lampard is seeking to add Havertz and Leicester left-back Ben Chilwell to his new-look side in an attempt to try to break the Liverpool–Manchester City duopoly at the top of the Premier League.

Bayern Munich were also linked heavily with Havertz, but the German giants’ €49m addition of Man City winger Leroy Sane has seem them move on from their interest in the 21-year-old. Bayern CEO Karl-Heinz Rummenigge admitted that the signing of Sane has eaten up much of the club’s spending money this summer, which leaves the Blues at the front of the queue.

Meanwhile Leverkusen sporting director Rudi Voller has admitted that Havertz can leave the club if certain conditions are met — saying “We have an agreement — if it fits, he can go this summer” — and it’s now up to the Blues to meet those criteria.

The Jadon Sancho saga could be set to come to an end with the news that the England winger has reportedly agreed terms with Manchester United.

That’s according to Ian McGarry of the Transfer Window Podcast, who believes Sancho has agreed a five-year deal. McGarry says that Sancho will leave Borussia Dortmund this summer and will earn £140,000-a-week at Old Trafford, with his salary increasing to £200k over the course of the five years.

Sancho is represented by the same agent who recently agreed Bukayo Saka‘s new deal with Arsenal, Emeka Obasi, andhe will be tasked with helping the two clubs agree a fee that works for both parties. Dortmund are reported to want around £100 million, while Man United will pay as much as £50m, so there is work to be done.

However, Sancho has topped Manchester United’s wishlist all year and manager Ole Gunnar Solskjaer could be set to land his No. 1 signing ahead of the new season.

Chelsea and Liverpool are leading the chase for young German winger Nick Breitenbucher, according to the Daily Mail.

The pacey 17-year-old has impressed for Hoffenheim’s youth team this season and has been described as “the next Arjen Robben” by his teammates as a result of his ability to run at defenders.

Like Robben, Breitenbucher likes to play on the right and cut inside onto his left foot. He has scored 13 goals to help Hoffenheim hit second place in their respective table.

Schalke are said to be favourites to land the youngster, but the Premier League champions and free-spending Blues are also thought to be mounting their own bids.

— Mundo Deportivo are suggesting that Xavi has agreed to replace Quique Setien as Barcelona manager. The Spanish outlet believes there is a “firm agreement” that will see the Barca legend return to the club at the end of the season. Xavi manages Al-Sadd in Qatar, but he could be set to earn £5.4m a year if he completes his return to Camp Nou as suggested.

— It’s not all good news for Barcelona, though, for they’re set to be snubbed by Manchester City’s Eric Garcia, who the Sun says is about to sign a new five-year deal at the Etihad Stadium. Barca were keen to re-sign the central defender who has impressed under Pep Guardiola’s tutelage this season, but Garcia is expected to treble his wages with the Citizens to £40,000-a-week. Garcia was considered the star of Barca’s academy when he left the club in 2017.