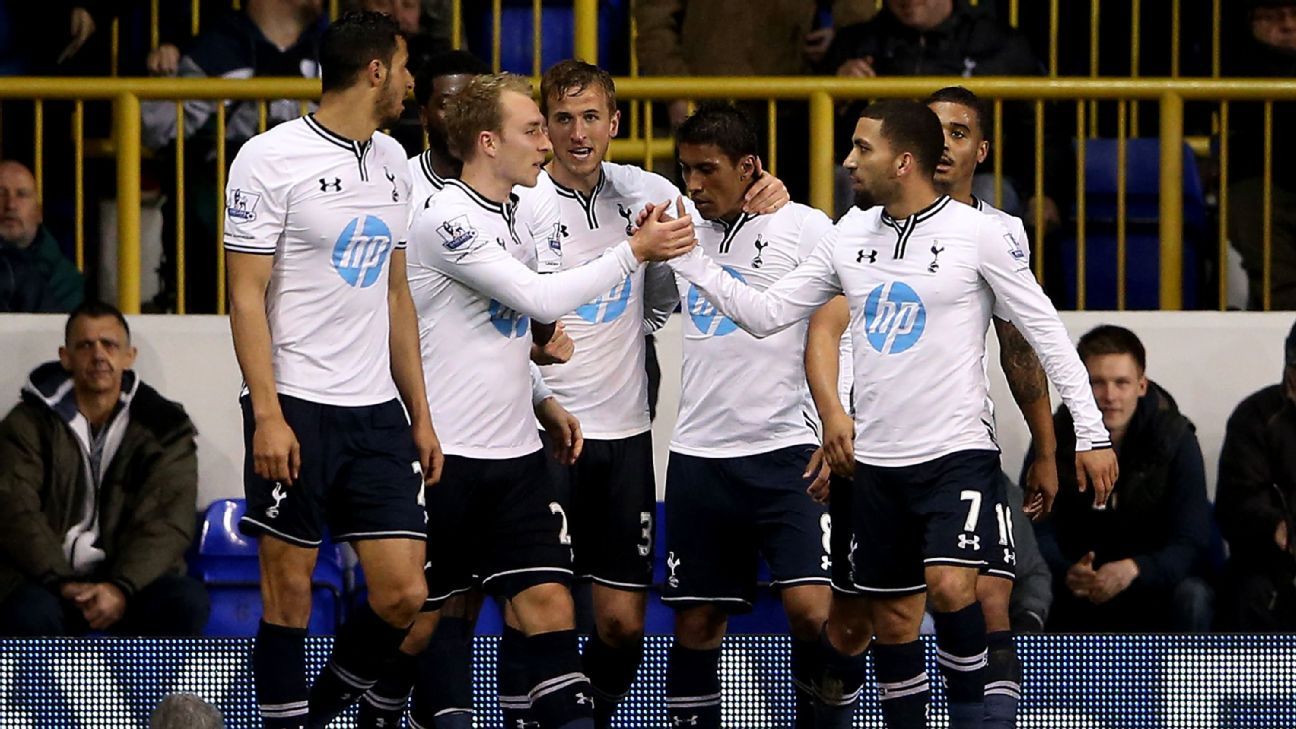 
As one door started to close at Tottenham Hotspur, another opened. On the morning of April 7, 2014, as Spurs prepared for the visit of the Premier League‘s bottom side Sunderland, reports emerged that manager Tim Sherwood was going to be relieved of his duties at the end of the season. Though Spurs released a statement trying to quash speculation and the team eased to a 5-1 win, six weeks later Sherwood was replaced by Southampton boss Mauricio Pochettino.

But while this match was the beginning of the end for Sherwood, it was also the start of Harry Kane‘s remarkable career in the Premier League. Having made his debut in August 2011 against Hearts in the Europa League qualifiers, the Sunderland game was his first Premier League start for the club after loan spells with Leyton Orient, Millwall, Norwich and Leicester City.

He rewarded Sherwood’s trust with a 59th-minute goal — a near-post dart and finish, which made it 2-1 — and Spurs ran out easy winners as Emmanuel Adebayor grabbed a brace, with Christian Eriksen and Gylfi Sigurdsson also on the scoresheet.

“Buzzing… buzzing to get the first start and to get a goal at White Hart Lane and to win 5-1 was a brilliant night,” Kane, who finished the game with a bandage on his head after a clash with Wes Brown, said afterwards. “As soon as I scored it, the emotions came out, I’ve been waiting patiently and to get that goal was a proud moment. It’s the best feeling of my career without a doubt, hopefully I can push on and get a few more.”

Seven years later Kane, 27, sits second in Tottenham’s all-time top scorer standings — with 217 goals, behind Jimmy Greaves’ tally of 266 — and is a bona fide club legend. We look back at his Premier League debut for Spurs and chart the fortunes of his teammates from that game.

GK, Hugo Lloris: The France No. 1 is in his ninth season at Tottenham and is club captain, having joined from Lyon in 2012 for £11m. He is yet to win any silverware at Spurs — though he did captain France to the 2018 World Cup — and, with his contract up in 2022, has been linked with a move to PSG or Man United this summer.

DEF, Kyle Naughton: The right-back joined Spurs from Sheffield United in 2009 alongside Kyle Walker for a combined fee of £9m. Naughton went on to make 75 appearances for Spurs from 2009 to 2015, but also spent time on loan at Middlesbrough, Leicester and Norwich. He signed for Swansea in 2015 for £5m and is still at the Championship side.

DEF, Danny Rose: He is still on Spurs’ books but is yet to make a Premier League appearance this season having found himself out of the picture under manager Jose Mourinho and behind Sergio Reguilon and Ben Davies in the left-back pecking order. Rose will no doubt move on at the end of the season — and was linked with a move to Trabzonspor in the last transfer window — but has been a fine player for Spurs, making 214 appearances since his debut in the 2009-10 campaign. He also spent time away on loan at Watford, Peterborough, Bristol City, Sunderland and Newcastle.

DEF, Vlad Chiriches: The Romania international centre-back joined Spurs in 2013 from Steaua Bucharest for around £8.5m. He came with plenty of promise and a then-record transfer fee for a Romanian player (broken by Nicolae Stanciu’s move to Anderlecht in 2016 and then by the £11.7m Parma paid for Dennis Man in January 2021), but after just 43 appearances, moved to Napoli in 2015. He spent the 2019-20 season on loan at Sassuolo and moved there permanently in September 2020 for £8.1m.

DEF, Younes Kaboul: Now running a care home in Belgium for those with mental disabilities, the France centre-back joined Spurs in 2007 from Auxerre for £10.8m, before moving to Portsmouth a year later for £5.3m. He then re-joined Spurs in 2010 and made a total of 140 appearances, before spells at Sunderland and Watford. He retired after leaving Watford in December 2018.

MID, Paulinho: Tottenham spent just over £17m to sign the Brazilian midfielder from Corinthians in 2013. He spent two seasons there before heading to China with Guangzhou Evergrande for a bargain £9.9m. A shock arrival at Barcelona followed in 2018-19 when they spent close to £36m to sign him, only to then send him back to the Chinese Super League team 16 months later for a similar fee. On the international stage, he played in the 2014 and 2018 World Cups but, now 32, he hasn’t made an appearance since 2018.

MID, Aaron Lennon: The England winger is at Kayserispor in Turkey, having joined on a free transfer in September. He made 365 appearances for Tottenham from 2005 to 2015, scoring 30 goals, and joined Everton on loan before securing a permanent deal in September 2015. In 2017, he was detained under the Mental Health Act by police and admitted to battles with depression, but his career got back on track with a two-year move to Burnley in January 2018 before his transfer to Turkey.

MID, Nacer Chadli: The Belgium midfielder is also in Turkey, at Basaksehir, having joined them in September 2020 from Monaco. Chadli spent three seasons at Spurs from 2013 to 2016, having joined from FC Twente for £7.3m. He then had spells at West Brom, Anderlecht and Monaco leading up to his move to Turkey.

MID, Christian Eriksen: A wonderful player for Tottenham, contributing 69 goals and 89 assists in his 305 appearances across his six-and-a-half years at the club, Eriksen left in January 2020 for a £24m move to Inter Milan and, after an underwhelming start, has now found his feet in Serie A. Spurs originally spent £12m to sign the Denmark midfielder from Ajax and, aged 29, he’s still got plenty of years left as he chases his first major trophy outside the Netherlands.

ST, Harry Kane: Back on that April night in 2014, Kane wore the No. 37 shirt. He’s since made the No. 10 his own and is easily one of Tottenham’s greatest ever players. His goal-scoring record is incredible, but this season he’s dropped a little deeper and has turned provider too. While he’s still waiting for his first piece of silverware at Tottenham, he won the 2018 World Cup Golden Boot and the 2015 PFA Young Player of the Year award.

ST, Emmanuel Adebayor: The former Arsenal striker scored 42 goals for London rivals Spurs from 2011 to 2015, but found himself out of favour under Pochettino in the 2014-15 campaign and was released that September. Arguably one of the finest strikers ever in the Premier League, he first joined the club on loan from Man City before signing permanently in 2012. The end of his three-year spell saw him move to Crystal Palace, before heading to Turkey with Istanbul Basakşehir and Kayserispor. The Togo star had made a short-term move to Paraguay side Olimpia in 2020 but was sent off for kicking an opponent in the face on his Copa Libertadores debut and terminated his contract after less than five months due to the COVID-19 pandemic. Now, 37, he is currently without a club.

GK, Brad Friedel: The United States legend hung up his gloves in 2015, after a career that saw spells with Newcastle, Brondby, Galatasaray, Columbus Crew, Liverpool, Blackburn, Aston Villa and Spurs. He’s currently working as an agent, having spent time in charge of the U.S. under-19s and New England Revolution.

DEF, Milos Veljkovic: He joined Spurs in 2011 from the Basel academy and came on to make his first-team debut in the match against Sunderland. Having spent time on loan at Middlesbrough and Charlton, the Switzerland centre-back joined Werder Bremen in 2016 for a cut price £300k and is contracted there through to 2022.

DEF, Zeki Fryers: Having started his career at Man United (where he made a total of six appearance), the left-back opted to move to Belgian side Standard Liege. Things didn’t go much better and he returned after a year (and seven games) to join Spurs in 2012 for £3.1m. However, he made just 16 appearances before moving to Crystal Palace in September 2014 for £3.4m. Spells at Rotherham, Ipswich and Barnsley followed before his switch to League One side Swindon in 2019 on a free transfer. At 28, he’s made less than 150 appearances in total.

MID, Gylfi Sigurdsson: The Iceland attacking midfielder is now a key member of Everton’s midfield under Carlo Ancelotti. Having joined Spurs from Hoffenheim for £8m in 2012, he made 83 appearances from 2012 to 2014 before moving to back to Swansea again and then to Everton for a reported £40m in 2017. With over 100 club career goals, the 31-year-old is still a class act.

MID, Sandro: The Brazilian defensive midfielder is currently without a club but, at 32, still has a few years left at the top of the game. He left Brazilian side Goias EC in January and is waiting on his next opportunity but since joining Spurs in 2011 for £9m, he has spent time with QPR, Antalyaspor, Benevento, Genoa, Udinese and Goias. Sandro made 106 appearances for Spurs, but his career took a downturn after a serious knee injury picked up against QPR in 2013.

MID, Nabil Bentaleb: The Algeria midfielder came through the Spurs academy and made 66 appearances until his move to Schalke in 2017 for £17m. He spent six months on loan at Newcastle in 2020, but now is still at Schalke. He has spent time this term in the U23s after being dropped for disciplinary reasons but, after a dismal campaign that will likely end in relegation, he will leave when his contract expires at the end of the season.

FW, Andros Townsend: The winger is now at Crystal Palace. He came through the Spurs academy and made 93 first-team appearances, while also spending time at nine different clubs on loan, before leaving to join Newcastle for around £12m in January 2016. It was only a six-month spell, however, as Palace paid £13m to land the England international that same summer. He won the Goal of the Season award in 2018-19 for his stunning volley effort against Manchester City and can be found working as a pundit in the UK.

Manager: Tim Sherwood: Sherwood left Spurs on May 13, 2014, just 37 days after this 5-1 win. He was replaced by Pochettino, who guided them to the 2019 Champions League final. After Spurs, Sherwood took charge of Aston Villa in February 2015 but was sacked just eight months later after a 10-game run without a win in the top flight. He then took up a post with Swindon Town in November 2018 as sporting director but left in June 2019. He’s now working as a TV analyst.