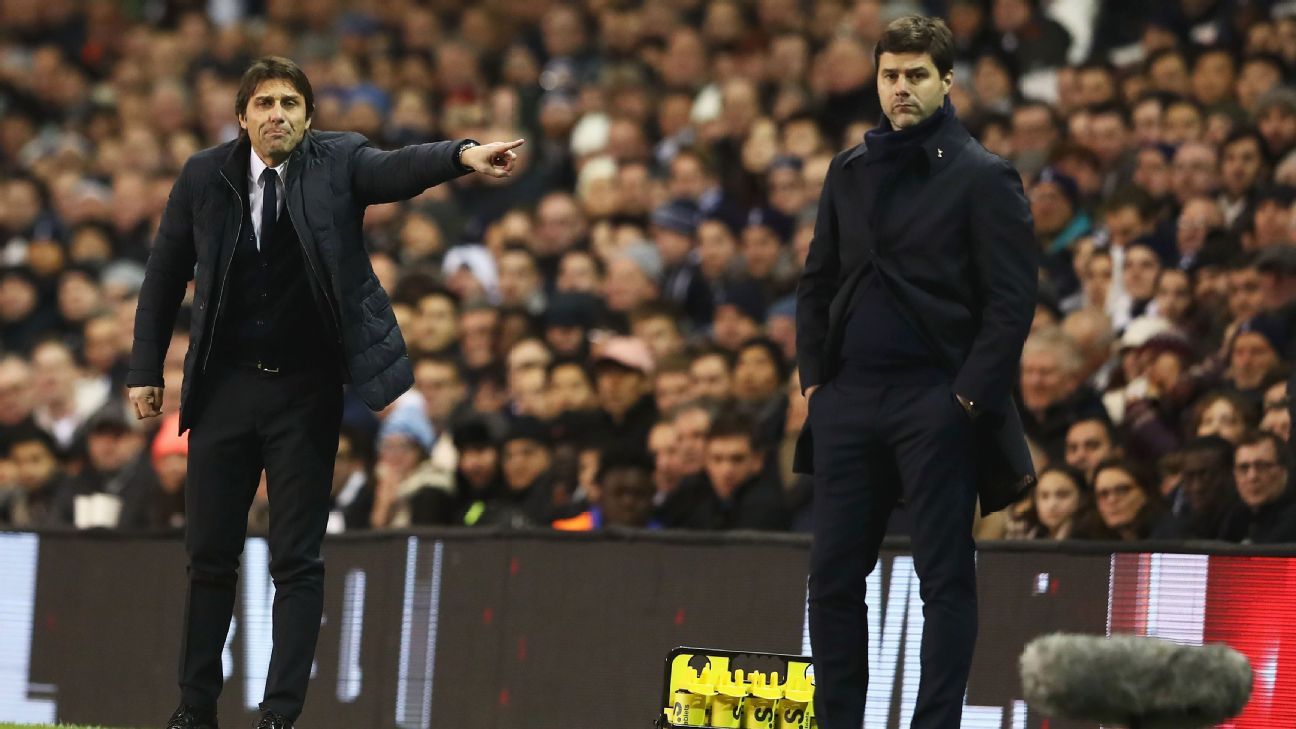 
This might not be the last time Mauricio Pochettino and Antonio Conte meet this season. Their Premier League showdown at Stamford Bridge has serious ramifications. A Tottenham victory would almost ensure that Chelsea will fail in their quest for a top-four finish. If the home side win, Spurs will become twitchy. They have a record of failing in crunch matches. The gap going into the game is five points; with eight games remaining, it could be a critical result.

Pochettino is currently one of the hottest properties in football management. There has been speculation that he could replace Zinedine Zidane at Real Madrid. Interest has been expressed from Bayern Munich. The 46-year-old appears to have the world at his feet.

By contrast, Conte will be leaving London in the summer. He won the Premier League last season and his record is significantly more impressive than Pochettino’s — three titles at Juventus and another in the English capital — but the 48-year-old’s availability in the summer is generating much less heat than the possibility of the Argentine leaving Tottenham.

The chances of Pochettino going to either the Bernabeu or the Allianz in the summer are small. Spurs, who are moving into a new stadium next season, are committed to keeping their biggest stars, even if they’re not players. Even though there has always been a sense that Pochettino views White Hart Lane as a stepping stone, it’s hard to see Tottenham allowing their manager to leave.

Paris Saint-Germain, in the market for a manager who can bring them European success, are likelier to turn to Conte. The other big jobs that might be free — Chelsea and, perhaps, Arsenal — would seem to rule out Pochettino for local rivalry reasons.

There has been much discussion about whether Tottenham need to win a trophy this season. The trajectory of this young team has been upward under their manager but in the FA Cup semifinal last season, Pochettino was so comprehensively out-thought and out-maneuvered by Conte that it was humbling.

In the Champions League knockout round, Max Allegri produced a tactical masterclass in the second leg at Wembley. Just when Tottenham appeared to have the tie won, the Juve coach switched things around with substitutions that left the home side reeling. Spurs and their manager didn’t react quickly enough. Games like these throw up questions about whether Pochettino is quite ready to make the step up to a more prominent and pressurized job.

In short, Pochettino’s reputation has outgrown his achievements. He’s turned Spurs into a team to be reckoned with but has not yet reached the point where his team is feared. It is too early to imagine him in one of the “top” foreign jobs — Real, Barcelona, PSG, Bayern — but he has the perfect opportunity to elevate Tottenham to the top table in the meantime.

By contrast, Conte has seen his reputation slip during his second year at Stamford Bridge. The former Italy coach performed a near miracle by winning the title in his first campaign, taking over an imbalanced squad and managing to shape it into a side that was significantly better than the sum of its parts. That he could not maintain the momentum says more about Chelsea’s methods than Conte’s. The Italian is high on PSG’s wish list given that he brings a strong record in the Champions League. The hierarchy in Paris crave success outside France.

Pochettino will be under scrutiny at Stamford Bridge this weekend. The weeks between now and the end of the season give him a chance to bolster his standing. Tottenham need to consolidate their place in the top four and a trophy would enhance the reputation of the Spurs manager. To win the FA Cup, the only silverware available, Pochettino needs to get past Jose Mourinho’s Manchester United in the semifinal and then, assuming Chelsea are too strong for struggling Southampton, Conte in the final.

Managers have a short window when they are in demand. Things can change very quickly in that department: Just ask Conte. If Pep Guardiola is excluded (and Manchester City will do almost anything to retain the Catalan’s services) then Pochettino is the most exciting young coach in the world and a man in demand. He needs to stamp his mark on the season, starting at Stamford Bridge. Once he can show he can get the better of Conte, his stock will rise even higher.