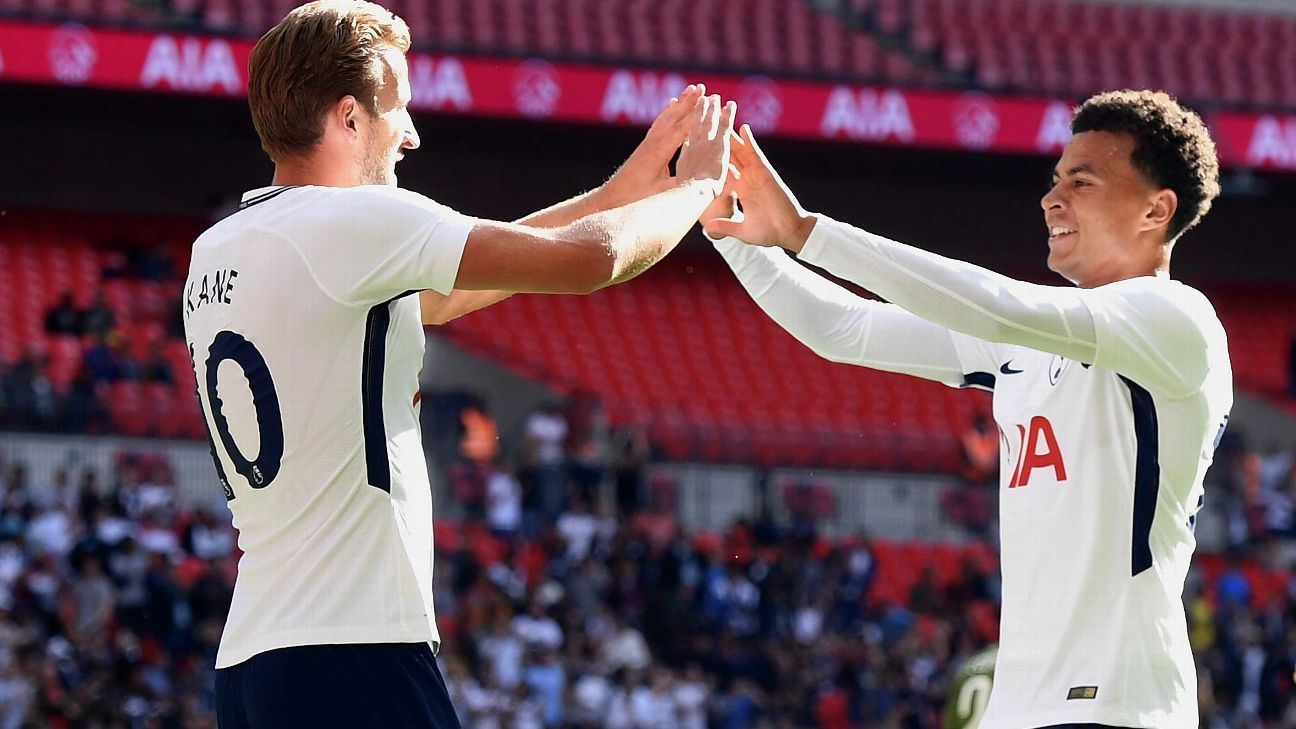 
LONDON — Tottenham finished their preseason slate with an impressive 2-0 win over Juventus at Wembley, but they were left sweating on the fitness of Kieran Trippier ahead of next weekend’s Premier League curtain-raiser at Newcastle.

Trippier collided heavily with Alex Sandro inside five minutes and, although he continued and set-up Harry Kane’s opener, he hobbled off before half-time following another clash with the Brazilian defender.

After the game, Trippier left Wembley on crutches with his right foot in a protective boot.

#thfc Trippier leaving Wembley on crutches and in a protective boot. pic.twitter.com/a0xcAxnjzW

If the attendance of 26,251 — under a third of Wembley’s capacity — was embarrassing for Spurs, their performance was not and Moussa Sissoko and Kane hit the woodwork either side of Christian Eriksen’s second goal. Juve finished the match strongly and substitutes Moise Kean and Juan Cuadrado both struck the crossbar in the final 15 minutes.

Trippier, Spurs’ only senior right-back following Kyle Walker’s move to Man City, was part of a full-strength team, which included Sissoko, who has been linked with a move to Turkey this week. Juve also named a strong XI with a front three of Gonzalo Higuain, Paulo Dybala and Mario Mandzukic.

Undeterred by the sparse crowd and a 3-0 defeat to Man City last week, Spurs started strongly and took the lead on 10 minutes with a superb team goal. Jan Vertonghen started the move by waltzing past Dybala on the halfway line and Kane finished it, heading Trippier’s pinpoint cross into the ground and past Gianluigi Buffon from seven yards.

There are questions about Spurs’ ability to play Mauricio Pochettino’s high-pressing football on Wembley’s big pitch but they were making good use of the space to hit Juve, now without Leonardo Bonucci, on the counterattack. Sissoko nearly doubled the lead when he collected Dele Alli’s through ball and curled a shot onto the inside of the post.

When Juve threatened, it was through Dybala or Higuain and the latter collected a deep corner and forced Hugo Lloris into a save at his near post after Dybala had fired over from 25 yards.

An encouraging first half for Spurs ended on a worrisome note when Trippier hobbled off. He was replaced by Kyle Walker-Peters, who has never made a senior appearance, and the 20-year-old or Eric Dier will have to start of the right side of defence at St. James’ Park in a week’s time if Trippier does not recover.

Juve have an extra week to prepare for their league campaign and they made four substitutions at half-time. But it was Spurs who continued in the ascendancy and Eriksen doubled their lead on 50 minutes, collecting Alli’s cute through ball and leaving Buffon sprawling on the turf on the way to rounding the legendary goalkeeper.

Kane nearly wrapped up the win soon after, playing a lovely one-two with Eriksen and crashing a left-foot drive onto the crossbar before Dembele, who was again impressive in midfield, fired just wide.

Spurs also made a host of second-half changes, introducing Harry Winks, Vincent Janssen Kevin Wimmer and youngsters Anthony Georgiou and Tashan Oakley-Boothe, the teenagers who impressed in the U.S.

Sensing the chance to snatch an undeserved draw, Juve stepped up a gear and Dybala tested Lloris with a low drive that the goalkeeper brilliantly tipped around the post.

Kean blazed onto the crossbar from 10 yards when totally unmarked before Cuadrado forced Lloris into another spectacular one-handed save onto the bar.

The next time Spurs play at Wembley, they will face Chelsea in the Premier League; they will hope for a bigger crowd but a similar scoreline.