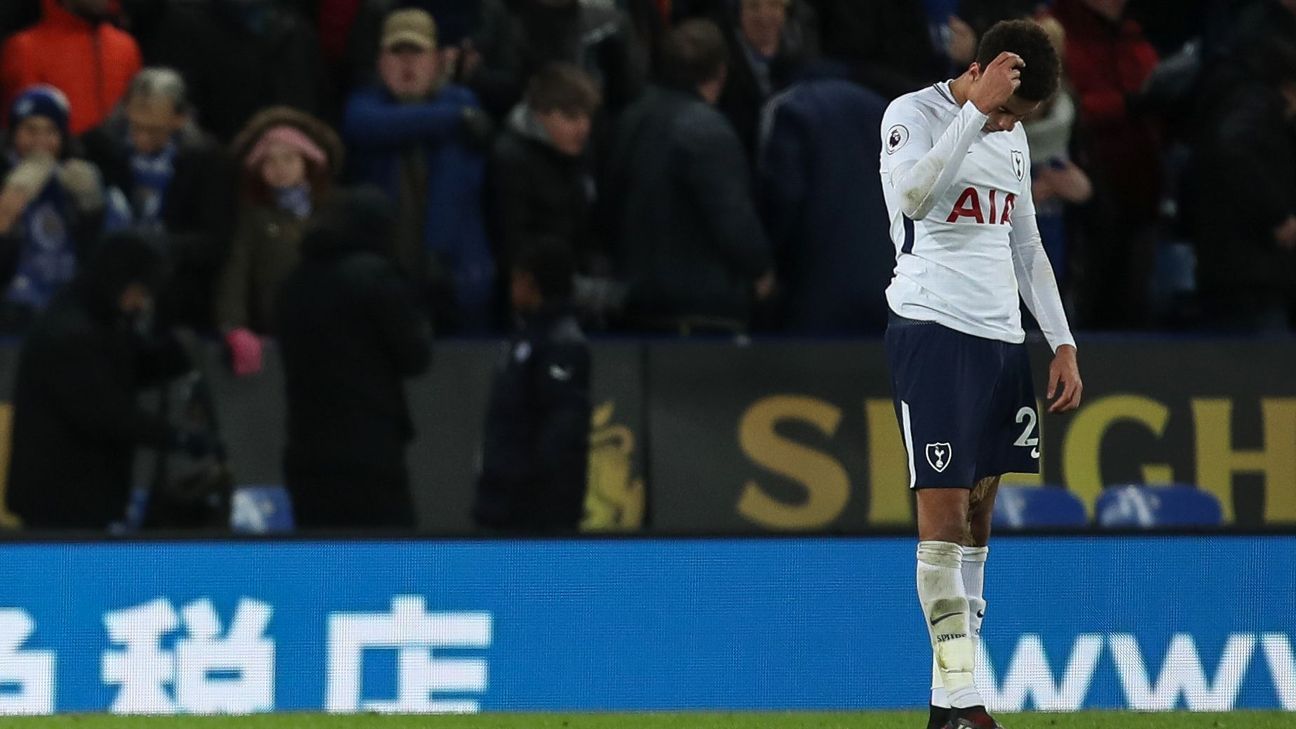 
Tottenham Hotspur are in free fall. Mauricio Pochettino has been found out. Dele Alli is a fraud. Champions League? You’re having a laugh. Spurs will be lucky to open their new stadium with Europa League qualifiers against the third best team in Finland.

Narratives certainly change swiftly in football. During the course of this season alone, Jose Mourinho has gone from being a has-been, who could only finish sixth with Manchester United, to a renewed man leading a revitalised squad to the title, to an also-ran lagging behind Pep Guardiola all the way to Tuesday night’s see-saw encounter with Watford that seems to have left him as a manager at least partially in credit.

Up until this week, there had been no rush to judge Spurs, Pochettino or Alli. But their defeat at Leicester put paid to that and now the rush for hot takes begins. The problem is that narratives like the ones in that introduction — we’ll certainly find out who made it to the second paragraph with one glance at the comments section! — are frequently seen because they’re so simple to formulate.

Yet Tottenham’s issues are not simple. There does not appear to be any systemic failing that will bring down this nascent empire just as it starts to rise. Instead, lots of little things are accumulating, thin vines wrapping themselves around the ankles, none thick enough alone to bring you down, but together…

Domestic form has certainly dropped off a cliff since Spurs relinquished a two-goal lead at Wembley and allowed West Ham to sneak past them in the League Cup. There have been league defeats at Manchester United, Arsenal and Leicester, as well as dropped points at home to West Bromwich Albion.

Spurs’ only league win since they thumped Liverpool 4-1 on Oct. 22 came at home over a Crystal Palace side yet to net away from Selhurst Park all season. It’s just those little things: The passing is a little off; the pressing isn’t quite there; the shooting is wayward.

Pochettino’s men have been magnificent in Europe, beating Real Madrid and Borussia Dortmund and sealing top spot in their group, and it is those games, not to mention so many others earlier in the campaign, which provide evidence that Tottenham, by any definition, are very good at football. But that’s not enough now.

This may be the season with the broadest level of quality that the Premier League has ever seen. At the top, Manchester City are using their apparently infinite resources not just to win, but to win in the most spectacular fashion. At United, Mourinho has spent £75m on Romelu Lukaku, who just happens to be mates with Paul Pogba, who cost nearly £100m last summer.

Arsenal spent £50m on Alexandre Lacazette; the sum would have watered eyes a couple of years ago, yet we still consider Arsene Wenger to be tight with money. Chelsea are the expensively assembled reigning champions and yet, with all of this quality, all of these superpowers in flux, there are Liverpool fans angry that they’re not leading the title race.

Even Palace, while still bottom, have £30m Belgian international Christian Benteke and, in Wilfried Zaha, a rapid, inventive forward who has attracted the attention of innumerable larger clubs, including Spurs. The point being; you don’t have to drop off a lot to lose games in this division.

And Tottenham have certainly dropped off, with Alli a case in point. At his best, he brings technical ability and combines it with a pugnacious streak of malice that upsets and unsettles opponents. But he’s not bringing much right now. In fact, he’s giving stuff away, namely possession.

The 21-year-old was to blame for West Brom’s goal last weekend. He’s snatching at his chances too, overthinking and wasting them. But he is only 21. He’s having a dip. Thirty years ago, when games were televised at the rate of one a week at most, no one would have noticed outside of his own dugout.

And if it was just Alli who was sagging, it wouldn’t be a problem. But Harry Kane is looking tired and doesn’t seem to be fully fit. Toby Alderweireld, who so often starts moves, is sorely missed. Eric Dier has dropped back to help but that means, without Vincent Wanyama, no defensive midfielder. Harry Winks could do the job, but guess what? He’s out, too.

Danny Rose, recently returned from injury and significantly less popular after his comments about Googling new teammates, was a shadow of his usual self against Leicester. Bit by bit, department by department, Spurs are losing edges. And against Man United, Arsenal and even Leicester, opposing players do not need any encouragement to take advantage.

Spurs nearly clawed their way back — Fernando Llorente’s late miss was a bad one — and, when you consider that Jamie Vardy’s goal was one for the Youtube compilations and that Leicester cleared one off the line, you can see the narrowness of the margins.

But in such a competitive division, where whoever finishes sixth will consider it a failure in spite of the strength of the teams above them — this presumes the top six will remain the same — sometimes you just lose games of football. Spurs can play better. They will play better. It doesn’t always means that a new narrative is required.