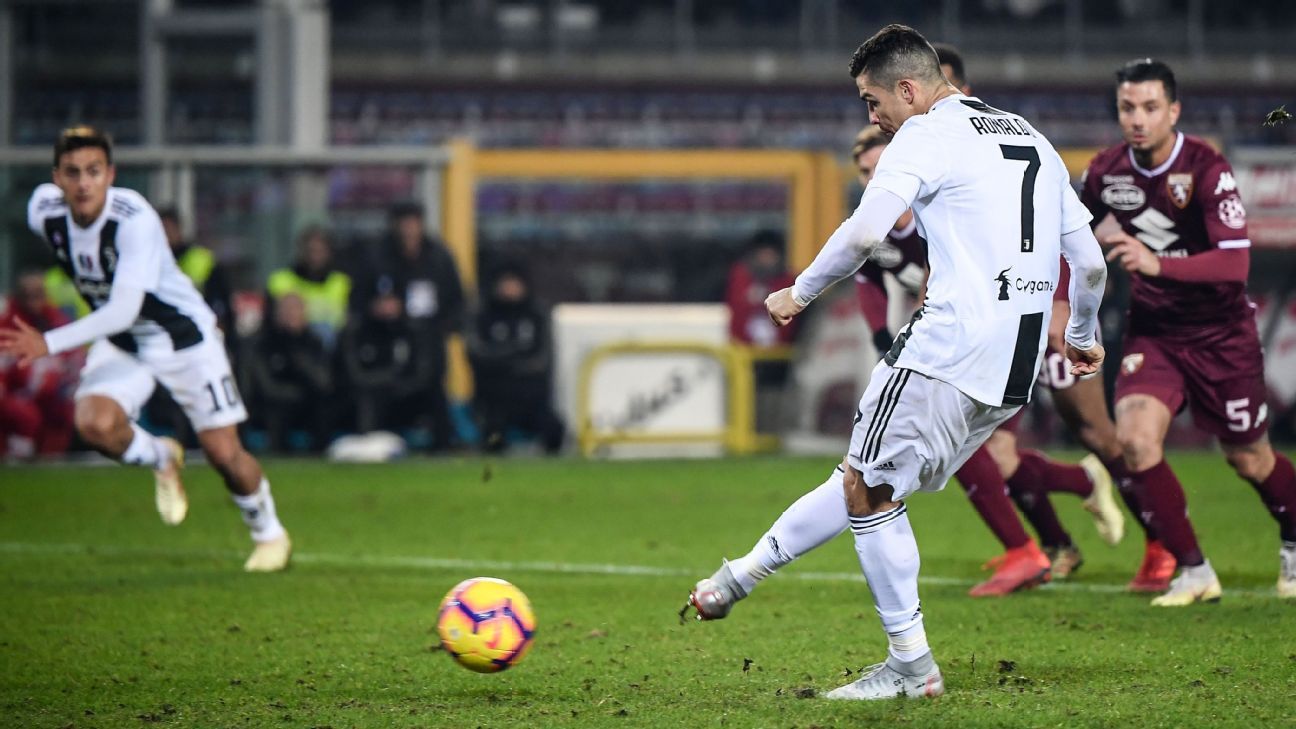 Cristiano Ronaldo converted a second-half penalty and was booked for provoking beaten goalkeeper Salvador Ichazo as relentless Serie A leaders Juventus beat Torino 1-0 in an absorbing derby on Saturday.

Sixth-placed Torino, who have beaten their bigger neighbours only once in the last 23 years, put up a brave show but were undone by an unfortunate mistake by forward Simone Zaza.

Having dispossessed Leonardo Bonucci, Zaza underhit a pass back to Ichazo, allowing Mario Mandzukic to intercept and the Croatian was then tripped by Torino’s substitute goalkeeper.

Ronaldo converted the penalty, despite Ichazo getting a hand to it, to score Juve’s 5,000th Serie A goal and leave the leaders with 46 points out of a possible 48 and 11 clear of Napoli, who visit Cagliari on Sunday.

The Portuguese ran straight at Ichazo and nudged him in the shoulder as he celebrated his 11th league goal of the season, leaving him as Serie A’s joint top scorer alongside Genoa’s Krzysztof Piatek.

“It was a complicated game, played on a difficult pitch against tough opponents,” said Ronaldo. “I think we played well and deserved the win.”

Ronaldo made an inauspicious start when his free kick, from a dangerous position on the edge of the area, was so wide of the mark that it went out for a throw-in.

Shortly afterwards, he had a shot brilliantly turned around the post by Salvatore Sirigu, who fell awkwardly and had to be replaced by Ichazo.

Torino took the game to Juventus in spirited fashion and kept them on the back foot for much of the time.

Armando Izzo failed to provide the finishing touch after Mattia Perin parried the ball to him then Zaza shot straight at the Juventus goalkeeper as Torino threatened an upset.

Torino kept battling after the break but Juve took control after the goal.

“We had some difficulties in the first half and we weren’t patient enough,” said Juventus coach Massimiliano Allegri.

“Also, because of their pressing, we couldn’t really get going…..and we could not afford to take too many risks on this pitch.”

Torino coach Walter Mazzarri said his side should have had a penalty for a foul on Andrea Belotti.

“I think it was more of a penalty than the one which was given to Juventus,” he said. “We’ll leave it at, it’s disappointing because the lads deserved a draw and maybe a little bit more.”