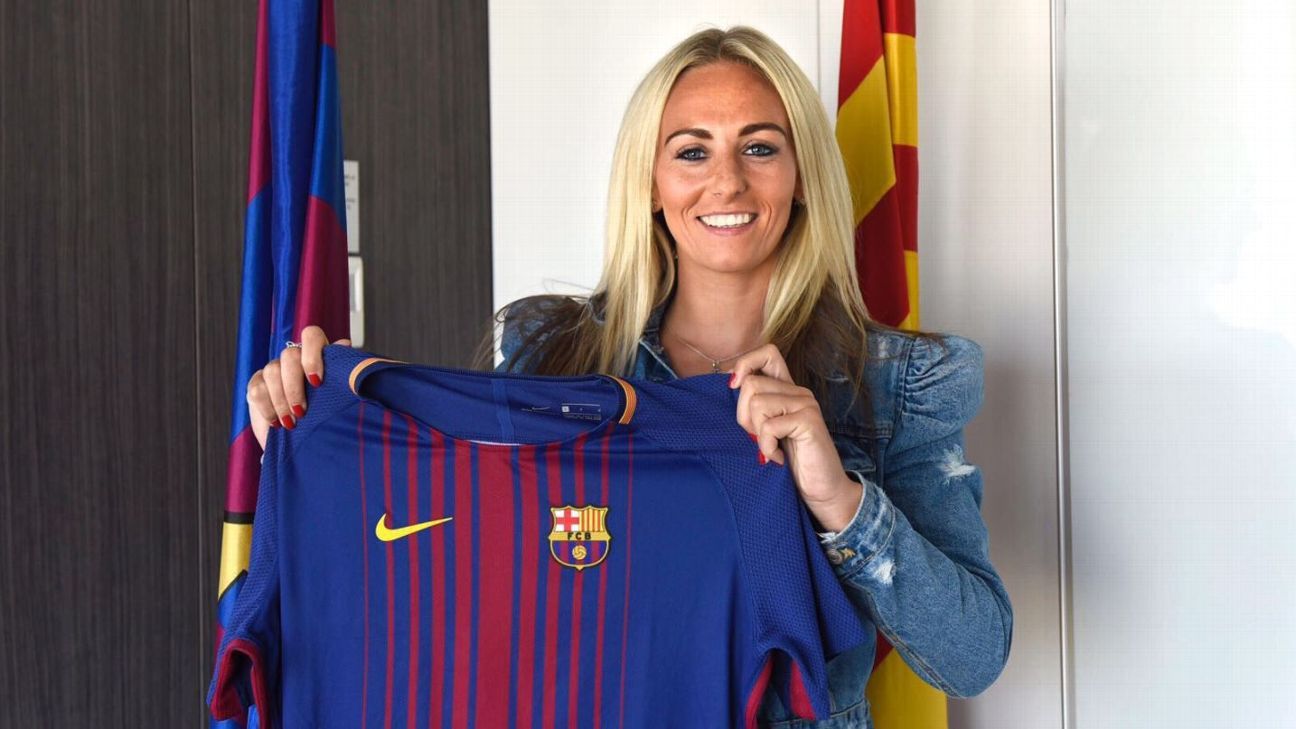 
BARCELONA, Spain — Toni Duggan wasn’t even born the last time Barcelona had an England international on their books. Twenty-eight years ago it was Gary Lineker trying his luck in Catalonia on the men’s team. Now, almost three decades later, it’s Duggan’s turn for the women’s side.

Duggan has already scored twice for Barca, who top the table with four wins and 23 goals from their opening four fixtures, since joining the club from Manchester City in the summer. The 26-year-old was one of six new arrivals — along with the UEFA Women’s Player of the Year Lieke Martens — as the club continue to its investment in the women’s team, having only turned professional two years ago.

If Barca’s commitment to their women’s team is a sign of the game’s growth, so is Duggan herself. The Liverpool-born forward boasts an impressive social media following (120,000 Twitter followers and 152,000 on Instagram) and is often held up as an example of expanding interest in the women’s game.

However, it’s not social media which interests Duggan. It’s trophies. Barca missed out on the league title to Atletico Madrid last season — there’s no Clasico rivalry as Real Madrid don’t have a team — and were knocked out in the last four of the Champions League.

In the summer they took steps to ensure this season has a happier ending by bringing in Duggan and she spoke exclusively to ESPN FC ahead of Barca’s debut in the Champions League on Wednesday against Norwegian side Avaldsnes.

Q. It’s been a few months since you joined, are you finally feeling like a Barcelona player?

A. It’s still not sunk in! It’s amazing. We had the team photo [last Friday] and it was surreal. Even when we walk out in the famous colours, I still think ‘wow, I’m so lucky to be here and part of a big club…’ But I don’t want it to stop there. I want to be successful here and I want to win trophies.

Q. You were sat with Luis Suarez at the team photo, did he have any advice for you?

A. We spoke. I like the way Luis Suarez plays. When I was growing up I was a Liverpool fan and I watched a lot of him when he came to Liverpool. He did a really good job. I was a big fan of his and it was amazing to sit by him in the team photo. I just said that I was from Liverpool and he was happy. He said to me that ‘Liverpool is a good place’ and we had a little chat. It was nice. He was really nice.

Q. Had you met him before?

A. It was the first time I’d spoken to him, not just for me, but for a lot of the players [on the women’s team]. The players were really nice and it’s really good that the club includes us and integrates us together, I think it’s important. This was the first time I met [Lionel] Messi, too, which was incredible. Last time I [met the Barca players in 2014] Suarez and Messi weren’t there. I was playing pool at St. George’s Park then, so it was a bit of a different environment now I’m here as one of their teammates on the women’s team.

Q. Barcelona’s women’s team don’t have a particularly rich history, why did you choose to come here?

A. I have said before I had a lot of options, in England and abroad in different countries. But when I weighed up the most important things, Barcelona was the right place to come. Obviously the luxury things like the weather and the lifestyle and everything else, but for me, the most important thing was the football. If I look at all the teams that were interested in me, the style I thought suited me best was Barcelona. For the first few weeks it’s been difficult for me, with other things, like living and the language and things like this. But when I’m settled, I think this is the best style for me.

Q. You seem to have settled in quickly…

A. I’m still in a hotel at the minute, but I think once I have somewhere to live I will be a lot more settled. My boyfriend’s out now at the minute. Sometimes I speak to him about the game after; he’s really honest and really supportive of me. At the moment he’s coming out for every home game, which is really nice. Hopefully, in the long-term he can be here full time with me, but we will see.

Q. We’re only four games into the season, but are you noticing the difference between Spain and England on the pitch?

A. Obviously the difference for me is it’s a lot more technical here than back home. In England, it is a lot more physical. The strategy and the game plan, I’d say is more diligent here. You know, a lot of teams like to play out from the back, so you have to be really focused when you’re defending. And then also the transition in attack, it’s a quick transition.

I mean there are some similarities because I come from Man City and they have a background of a lot of Barcelona staff and we play a similar culture. But when you weigh up the language and the weather and new players and many other things, it can become very difficult on the pitch. But as I say, the first few weeks have gone OK so far. The team, the girls, the staff, everyone’s been brilliant. I think for me on the pitch I know I can get more from myself, but that will come.

Q. But as you said before, there are lots of similarities between Barca and Manchester City…

So a couple of little things, like my first year we were training at a school, then the next year we were at the [City] academy that they have now. I think that’s similar to Barcelona last year, but this year especially they have invested a lot more. So sometimes there are going to be little things that need tweaking, but I believe in the next two, three years this will be unbelievable, just as Manchester City was and is.

Q. Have you spoken about the targets for the season?

A. I think just take things step-by-step. First and foremost, the league. The girls lost out last year to Atletico Madrid so that has to be our first ambition. And the Champions League, who knows. Last year the girls got to the semifinal which is a great achievement, but we know it’s difficult. Sometimes you need the luck of the draw, there are a lot of tough opponents and we’re a new team with many new players so I think it will take time to gel. But, you know, the Champions League’s a tough test and if not this year then in the future hopefully.

Q. And maybe a game against City in the later rounds…

A. I think Manchester City will be up there, they’re a great team. The likes of Lyon, Wolfsburg, the usual names that are always there or thereabouts in the latter stages. But also Barcelona, we have a great team and I hope we can go far in the Champions League.