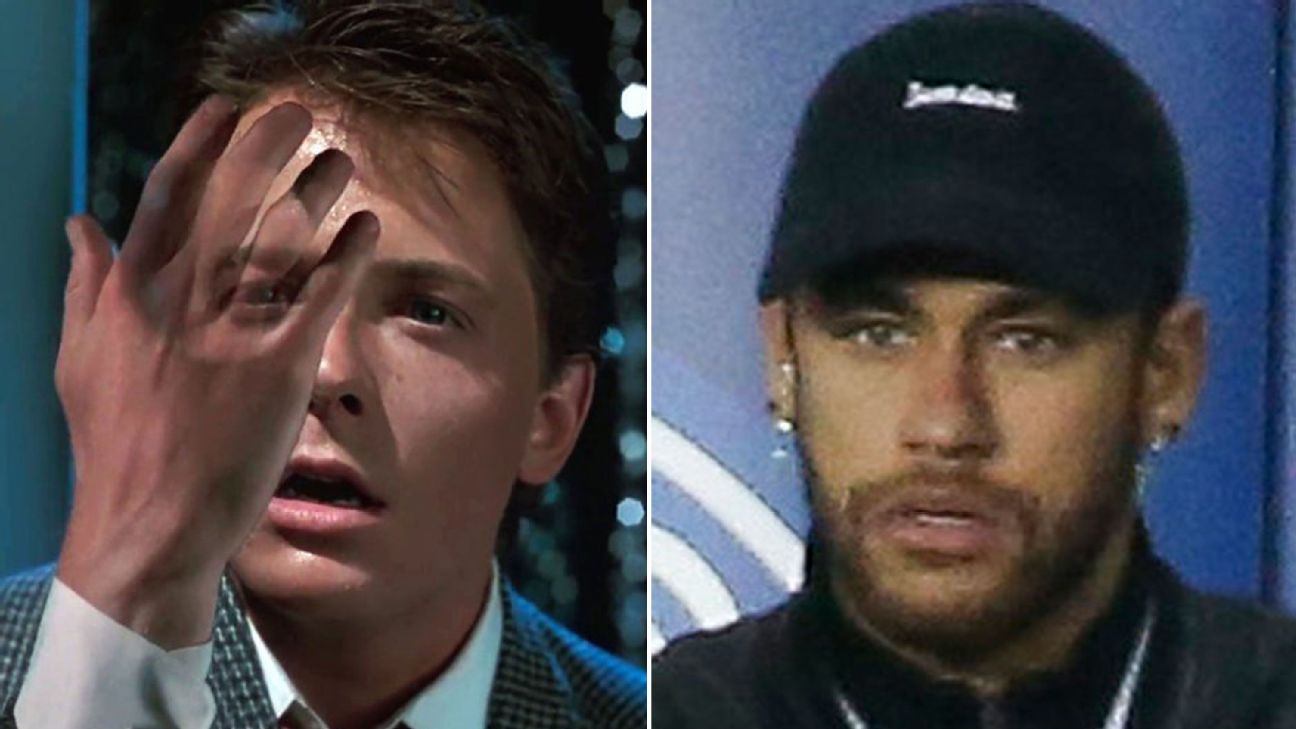 As you may well have heard, there are rumours abound that Neymar is gearing up to part company with Paris Saint-Germain just two years after his world record €222 million move to the Parc des Princes.

Sources have told ESPN FC that Real Madrid players have been talking to the Brazil star to persuade him to join them at the Bernabeu, while Barcelona have begun negotiating a cash deal with a player exchange.

– Neymar pulled in, pushed out of PSG celebration
– All the new 2019-20 kit for Europe’s top clubs
– ESPN fantasy: Sign up here!

Just three weeks ago, Neymar was among the players modelling PSG’s new “infrared” away kit on their preseason trip to China. But the French champions have been open about the possibility that he could be sold this summer, and now they appear to have surreptitiously begun removing his name and image wherever possible.

These were findings of UOL Esporte journalist Joao Henrique Marques, who took a tour of the PSG club store this week and found that almost all things related to the No. 10 seem to have been removed from sale. In fact, the only trace of Neymar that Marques could spot seems to be a single, small image over in the section where his signature Nike boots are still out on the racks.

A cursory glance at PSG’s official website also reveals that the 27-year-old’s image has also completely vanished from the home page — even the Portuguese-language edition. However, he does retain his place in the squad list. For now, at least.

In the unlikely event that Neymar decides to pop into the PSG club store this week, he may experience an existential crisis akin to Marty McFly watching in horror as he is being erased from history before his very eyes in “Back To The Future.”

Here’s hoping a flying DeLorean swoops in to take Neymar Back To La Liga, before he disappears entirely

Liverpool fans fretting about their goalkeeper’s recent injury can rest easy in the knowledge that Alison Becker’s calves are in tip-top condition.

Unfortunately, however, the Alison Becker (note: only the one “S”) in question isn’t the crocked Reds goalkeeper at all, but the American actor with a very similar name.

Becker, who has dozens of comedy credits to her name but is perhaps best known for playing local newspaper reporter Shauna Malwae-Tweep on “Parks & Recreation,” has been bombarded with concerned “get well soon” messages on Twitter for the past few days.

MY CALVES ARE FINE YOU GUYS. #ynwa

She has never, to the best of our knowledge, made an appearance for Liverpool — though it’s certainly not the first time she’s been mistaken for the Brazilian shot-stopper on social media.

So while Brazil international Alisson remains ruled out of action for Liverpool “for the next few weeks” by manager Jurgen Klopp, New Jersey-born actor Alison is free to engage in whatever sporting activity she likes.

Fernando Torres is preparing to say goodbye to Sagan Tosu just a little over a year since making his big move to the Japanese top flight.

The 35-year-old is likely to retire after turning out in his farewell game, which has been pinpointed as the upcoming J1 League fixture against Vissel Kobe, where he could face former Spain teammates Andres Iniesta and David Villa.

Torres has also been allowed to help design a one-off Tosu kit for the occasion and the result is a shirt inspired by his favourite Atletico Madrid home kit from 1989.

What do you think? pic.twitter.com/8Rpj0W0XU8

“El Niño” is a lifelong Atleti supporter, so it’s undeniably fitting that he brings his vastly successful career to a close while wearing the colours of his beloved team.

Who could possibly begrudge him that?

Back in May, Russia international footballers Aleksandr Kokorin and Pavel Mamaev were both jailed for hooliganism after attacking a trade ministry official and a chauffeur at a Moscow bar.

Kokorin (then of Zenit St Petersburg) was given a sentence of 18 months while Mamaev (Krasnodar) was given 17 months for his part in the brawl.

Despite being behind bars, both players are keeping match fit by playing for the prison’s 6-a-side team.

Indeed, both Kokorin and Mamaev featured in an exhibition game against third-division side Salut Belgorod at the weekend, a 4-2 victory in which Mamaev scored two goals.

Will the story of this encounter one day by dramatised for the big screen, following in the great tradition of sport-in-prison movies such as “Escape To Victory” and “The Longest Yard”? Probably not, no.