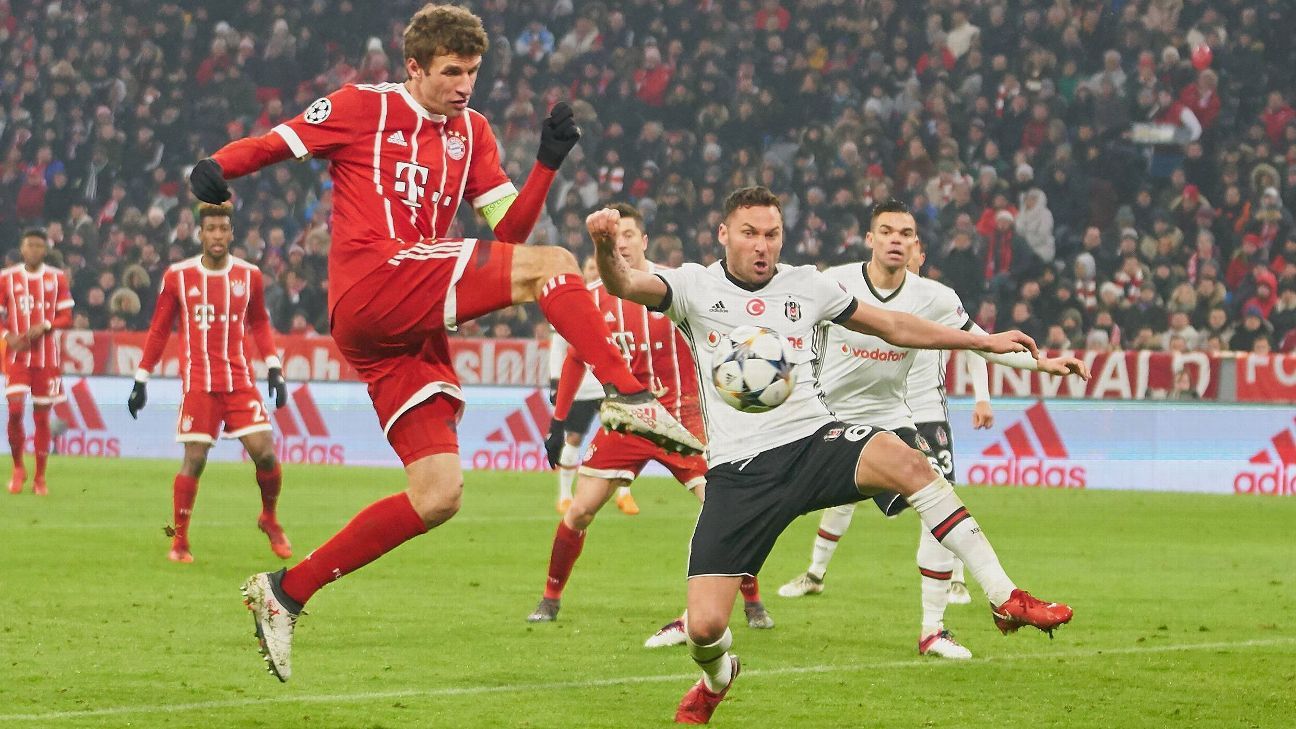 
Bayern Munich have one foot in the Champions League quarterfinals after thrashing 10-man Besiktas 5-0, courtesy of two goals apiece from the “unique” Thomas Muller and Robert Lewandowski and another from the impressive Kingsley Coman.

Bayern are set for their seventh successive quarterfinal and can bank on their home fortress. They’ve won 20 out of 21 games at the Allianz Arena, with their only defeat coming to eventual Champions League winners Real Madrid last season.

The Bayern bandwagon keeps chugging under Jupp Heynckes, as the German champions sealed a 14th straight win in all competitions with a thumping victory over the Turkish underdogs.

James Rodriguez, resurgent under Heynckes, picked up a calf injury, but Heynckes said after the match that it was nothing serious.

10 — Heynckes gets the 10, as the 72-year-old became the first-ever Bayern coach win to 10 consecutive Champions League games (five this year and five in Bayern’s 2012-13 championship season). Heynckes has engineered a remarkable transformation of a Bayern side that had gone stale under Carlo Ancelotti.

GK Sven Ulreich, 7 — Hardly tested but had to produce a decent save on Ricardo Quaresma to prevent his side falling behind against Bestikas.

DF David Alaba, 8 — Much improved under Heynckes and has forged a fantastic partnership with Coman down the Bayern left. The Austrian was impressive going forward and provided the assist for the first goal.

DF Mats Hummels, 7 — Outsmarted by Quaresma but Ulreich saved the day, and the ageing Wagner Love also skipped past Hummels too easily but fired over. Besiktas’ overworked goalkeeper Fabri fantastically tipped over Hummels’ close-range header but could not hold his fierce shot, which his former Borussia Dortmund teammate Lewandowski mopped up.

DF Joshua Kimmich, 7 — Featured in every Champions League game and improved a great deal when reunited with Arjen Robben, providing Muller’s second goal on a plate with a precise cross on the right flank.

MF Javi Martinez, 7 — Restored to a holding defensive midfield role, Martinez is one of the first names on Heynckes’ team sheets. He was still going strong at the end, as Fabri had to go full stretch to keep out Martinez’s piledriver.

MF Arturo Vidal, 7 — Enjoying his most prolific season in front of goal at Bayern and went close on a couple of occasions in the first half before Muller broke the deadlock.

MF James Rodriguez, 6 — Has also featured in every game of the CL campaign and is quickly becoming a stalwart for the Bavarians in an impressive debut season. Floated a cute free kick narrowly wide immediately after the game-changing red card. Was hit flush in the face by a wayward Muller shot before suffering a calf injury shortly before the break.

MF Kingsley Coman, 8 — Preferred ahead of Franck Ribery, Coman tested Fabri early with a rasping shot and his pace unlocked the Besiktas defence for the precious opening goal. He doubled the lead with a calm finish in what would normally be a man-of-the-match performance but for …

MF Thomas Muller, 9 — Totally reinvigorated under Heynckes after falling down the pecking order under Ancelotti. Muller scored a goal in each half, both from a couple of yards out in his inimitable fashion, taking his tally to 42 in the competition. Naturally, he’s Bayern’s leading CL scorer. He also laid the final goal of the evening on a plate for…

FW Robert Lewandowski, 8 — Fouled on the 16th-minute red card and had to wait till the 79th minute before grabbing his inevitable goals — notching two in the final 11 minutes with a pair of routine finishes. Lewandowski also turned provider for Coman to double the advantage. Clinically efficient.

MF Arjen Robben, 8 — Seriously peeved at not starting, Robben came on for the injured James immediately after the opening goal. He breathed new life into Bayern’s display in the second half and was a constant menace on the right.