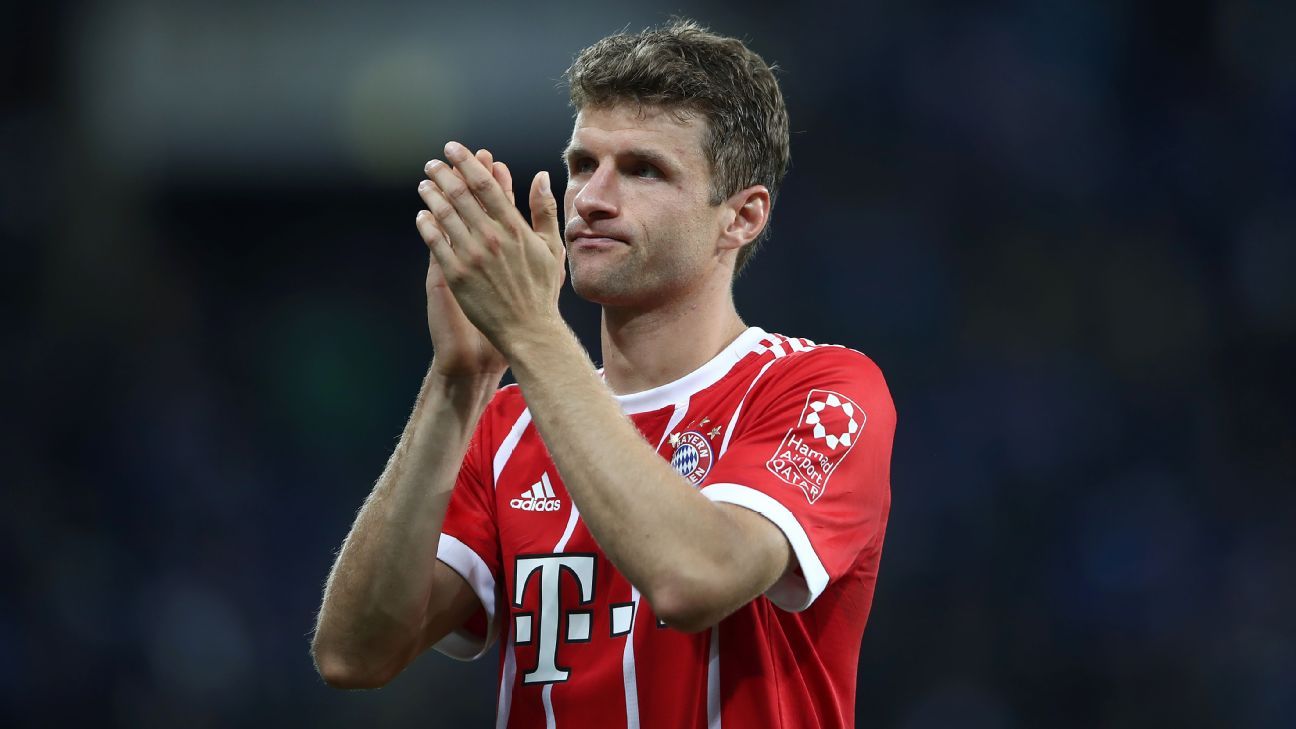 
Bayern Munich’s Thomas Muller has told kicker he thought about moving to Manchester United two years ago and has not ruled out playing for another club in the future.

Muller was the subject of a €100 million bid from the Premier League club in the summer of 2015 when his former Bayern mentor Louis van Gaal was in charge at Old Trafford.

Speaking about his decision to stay with the German champions, he said: “There was a stage when the subject arose two years ago when I considered it, but then the club immediately backed me and I was told I belong here.

“I didn’t have to think about it a great deal after Bayern said we are counting on you and that you are an important man for us.”

Last season, the Germany international struggled to back up his performances in 2015-16, when his 32 goals in all competitions prompted United’s bid.

He only notched five Bundesliga goals in 2016-17 and endured a 999-minute league goal drought. Bayern CEO Karl-Heinz Rummenigge challenged Muller to improve ahead of the current campaign, but the forward has yet to score.

He was philosophical when asked if he could imagine life away from Bayern.

“Of course, it’s possible,” he said. “When my time is up, it’s up. [Bastian] Schweinsteiger was here for over 10 years and now he’s been gone for over two years and another player is here instead.

“It will be exactly the same with me. If I drop dead tomorrow, there will be a funeral, yet on Friday, 11 players will still be out on the pitch. That’s life.

“At the moment, I don’t think it’s going to happen because I am very happy here. However, I’m not saying that somewhere different in the world definitely wouldn’t be my thing either.

“If life takes you somewhere else then I would make myself at home there as well. I would follow the same principle as here, enjoying as many good things as possible every day.”

Muller has spent his entire career at the club and is the only remaining Bavarian in the squad following Philipp Lahm’s retirement at the end of last season. He played his 400th game for the club as Bayern slipped to their first defeat of the season against Hoffenheim on Saturday.

The 27-year-old recently spoke out after Bayern boss Carlo Ancelotti started Thiago Alcantara in his place in last month’s 2-0 win over Werder Bremen, saying: “I don’t know exactly which qualities the coach wants to see, but mine seem not to be 100 percent in demand.”

Last season, Ancelotti regularly left Muller on the bench in the bigger games — often preferring to use Spain midfielder Thiago in an advanced role behind top scorer Lewandowski.

Kicker reported that Muller almost left the club in 2009 but mentor Hermann Gerland intervened to prevent a move to Hoffenheim.

Last week, both Arsenal and Chelsea were linked with a move for Muller, who was the top scorer at the 2010 World Cup.

Rummenigge, who hit out at Robert Lewandowski for his recent criticism of Bayern’s transfer policy, told Bild he was not happy about Muller’s recent suggestion he does not fit into Ancelotti’s plans.

“What Muller said against the coach in Bremen was also not OK,” Rummenigge said. “We need more efficiency and seriousness again. Dissatisfaction with being on the bench is OK, but no public criticism of the coach will be tolerated.”