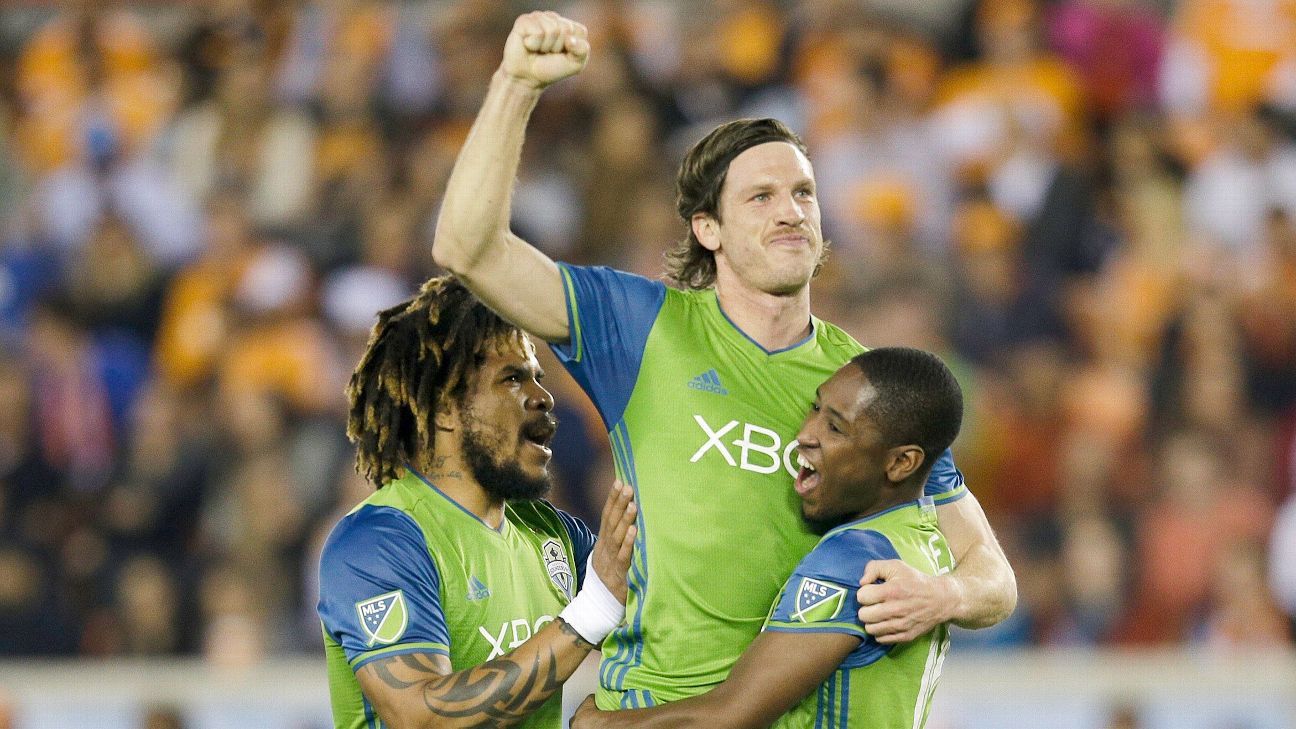 
The Western Conference final first leg, in which the Seattle Sounders beat the Dynamo 2-0 in Houston, was not a game to draw a lot of applicable lessons from. In large part, that’s because it was played in a state of exception after the first half hour.

At that point, Joe Willis’ penalty save had briefly looked to have kept Houston in manageable damage-limitation mode, even though his team was a goal and a man down at that moment. In the immediate wake of the red card to Jalil Anibaba, the Dynamo staggered but did not concede under Seattle pressure and wastefulness in front of goal, but inevitably Wilmer Cabrera had to make a tactical substitution to switch out Alex for another center-back in Leonardo, and from that reshuffle on the complexion of the game changed.

Now Seattle had all sorts of space to pick its passes in midfield, while Houston was left relying on its full-backs for width, as its attacking wide men tucked in. That in turn gave Seattle space to attack down the flanks, and a grateful Joevin Jones duly exploited that space to set up Will Bruin for a second goal just before halftime. Incidentally, Bruin benefited from Leonardo losing him to follow Nicolas Lodeiro in the build-up to the goal, in a further indirect consequence of that red card.

Cabrera had done his best to shift the pressure onto the Sounders in the build-up to the game, trying to turn their overwhelming favorites status into a burden.

But a cautious start by the Dynamo had already been punished by an early Gustav Svensson set-piece goal by the time the penalty incident happened, and any thoughts that Houston could punish complacency turned out to have rather less relevance than Seattle’s ability to punish Houston’s collective inexperience in the playoffs.

Not that Houston doesn’t have plenty of individual experience, of course. The likes of DaMarcus Beasley and Philippe Senderos should have been able to calm their fellow defenders, while the team’s Honduran contingent may have had to deal with fatigue and disappointment in the wake of their country’s World Cup playoff loss to Australia, but should hardly have been intimidated by a club soccer game, even a knockout one.

And there were indeed flashes of individual encouragement from the likes of Alberth Elis and Mauro Manotas, as Houston did its best to produce some individual inspiration to transcend its numerical disadvantage.

That magic will be in shorter supply in Seattle, however; Elis picked up a costly yellow card for dissent in the wake of the penalty and will be suspended for the second leg. And with Senderos also leaving the game with an injury in the second half, Houston will go into the second leg after being stretched to breaking point in the first, while Seattle was able to give Clint Dempsey a precautionary rest at half-time and generally looks like a side easing through the gears.

Is there anything for Houston to build on? Well, one of the intriguing potential storylines for the first leg never quite materialized. A lot of attention was paid to the circumstances around Willis replacing Tyler Deric in Houston’s goal, but Tyler Miller replacing Stefan Frei as Seattle goalkeeper should have been an invitation for the Dynamo to test Miller’s somewhat suspect ability on crosses. If he plays again in the second leg, a full-strength Dynamo will need to consider that option again. As it was, wide approach play was at a premium once the team went two goals and a man down, and it was Seattle who plundered its goals in the air.

Miller had help in the shape of the redoubtable combination of Roman Torres and Chad Marshall mopping up plenty in the box, of course, so the late yellow card that rules Torres out of the second leg offered one of the few glimmers of hope for the Dynamo for breaching the solid Seattle defense.

The Sounders, meanwhile, will leave the evening satisfied at the outcome but perhaps with the nagging feeling they should have made more of the space they routinely carved open in Houston’s third. Seattle’s interplay, even on Houston’s infamous rutted surface, was delightful at times, but with better finishing this series should have been long out of sight. Seattle won’t be as wasteful next week, but it also won’t have as much space next week.

Still, Seattle’s favorite status was only consolidated by Tuesday’s events. And with Houston forced to chase road goals, the Sounders will now be content to play without the ball as needed and look to kill off the series with a goal on a counter or set piece. For its part, Houston should have more width and more outlets for Juan David Cabeza’s distribution, which was a Dynamo highlight on Tuesday, before the red card narrowed the team. If it can find some telling balls behind Seattle’s defense, Houston can scare the Sounders, but mind games aside, this has always been Seattle’s series to lose, and right now it doesn’t look like losing it.