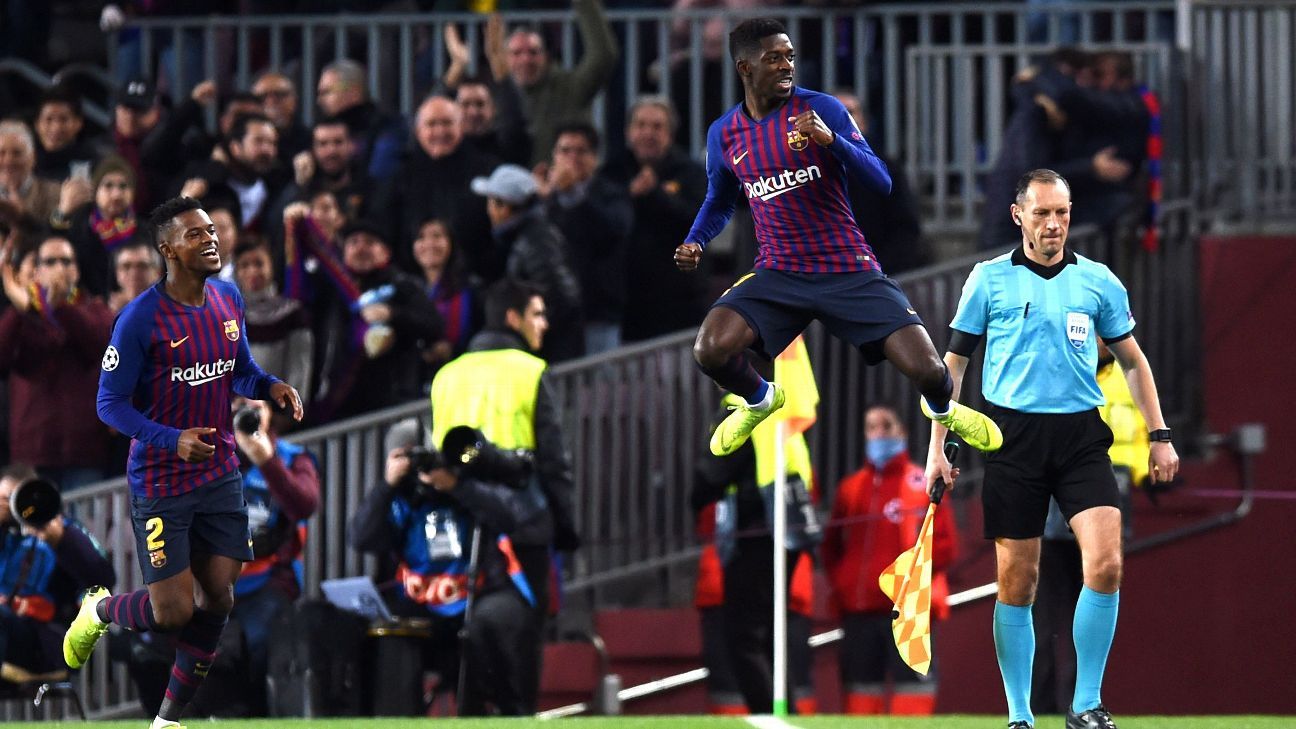 
“You win the derby well, 4-0. Sunday comes, the sun is shining and you think it’s going to be a relaxing, easy day, but… the truth is, you don’t expect things like that to happen but, well, what you gonna do?”

Put him back in the team, of course.

Ousmane Dembele did it again. Both its. On Saturday night, he scored a wonderful goal as Barcelona beat Espanyol 4-0. On Sunday morning, he was late to training. Two hours late, in fact. Which is not so much late as not showing up at all; it’s turning up as the rest are heading home with their work done, getting there just in time to ask how it went. No wonder he was all they were talking about on Monday.

More than half the questions posed to Ernesto Valverde in his pre-match news conference before the Spurs game were about Dembele. What are you gonna do? He had left the Frenchman out of the team against Real Betis for being late; this time, he left just about everyone else out of the team against Spurs but put him in. There was no Luis Suarez, no Jordi Alba, no Gerard Pique, no Sergio Busquets and no Arturo Vidal, at least not from the start. There was no Marc-Andre ter-Stegen, either. And, of course, no Lionel Messi.

Dembele was there but as the Camp Nou started to fill up, and as Mauricio Pochettino, interviewed before the game, couldn’t stifle a giggle, you wondered if that was as much punishment than reward: another penance to go with the €100,000 he’d been fined and the going-over his teammates had given him. Seven minutes in, it felt like something else. Football. Or redemption, the oldest story in sport. He’d apologised on Monday but it was one thing to say he was sorry, another to show it.

Dembele was inside his own area when he set off, following Munir’s header out of the area and Moussa Sissoko’s header back toward Kyle Walker-Peters. Suddenly, he shifted. He’d seen something: weakness, an opportunity. He took the ball from the full-back, turning left then right again. And then… whoosh. The acceleration was breathtaking; it took Walker-Peters’ hip too. The defender turned, momentarily stuck as if his weight was in the wrong place, helplessly watching as Dembele was gone, flying off.

Harry Winks flew too, taking off and unable to stop, going straight past like a cartoon character off a cliff as Dembele put the breaks on, stopping as swiftly as he had started, turning and cutting back inside. And that was where he scored, with his seventh touch. Spurs’ free kick had been in a dangerous position. When Christian Eriksen’s delivery fell short, that danger changed sides but only because Dembele was there. It had taken 13 seconds and he had travelled 87 metres. “Science fiction,” Sport called it.

“He’s one-footed,” Jorge Valdano commented. “The thing is, we don’t yet know which foot it is.”

One headline read, in French: “Oh Mon Dieu.” The devil had become a deity.

Dembele ran to the touchline tapping at his head, a parody perhaps of a man trying to get an idea into his brain? A young talent, told to think about it. That afternoon reports claimed that the club captains had laid into him; now teammates leapt onto him. Think about it? Think about this. They had, and often: talent changes the boundaries and levels of acceptance. Amid all the debate, one thing has not been doubted: his talent.

Valverde had referred to the “Dembele Series,” an ongoing drama with a new episode every day. The stories had been many, off the pitch. So, though, had the stories on it and this was the best of them all. So, the temptation and desire was there for cracking the same easy joke: “Ah forget it, you train when you want, pal.”

This isn’t really the point, but there’s something seductive about those that break the mould and don’t seem to conform. Especially if they perform. Magico Gonzalez oversleeping and missing the first half, arriving at the break, the team 2-0 down, and going on to lead his team to a 3-2 win. Or so it goes. Like Romario admitting (years later, it is true) that he wasn’t likely to watch his son train: “I don’t think I’ll go to his training sessions. I mean, I didn’t even go to my own.”  Or Ronaldo grinning: “relax, presi, I’ll score you two goals” — and then scoring two goals.

Sport called Dembele a “blessed rebel” while others saw a breakthrough. “He’s a great now,” El Mundo Deportivo claimed, describing him as having “taken off” — its editor, Santi Nolla, called this Dembele’s “awakening.” Sport cheered “at last, the best Dembele!”

But it was not — not really. It wasn’t really an awakening, nor an “at last.” Dembele was already doing this. He had already scored five decisive, result-changing goals for Barcelona. Now he’d opened the scoring against Spurs. He had been directly involved in nine goals over the past nine games: four goals, five assists. The contribution, if not always the continuity, was already clear.

If there was a change in Dembele it lay elsewhere, residing in other elements. Perhaps in other people’s perceptions, too. When the goal went in, on one level at least, Valverde’s task might even have been made harder. Goals, especially goals this brilliant, justify all else even if sometimes maybe they shouldn’t: results don’t only reinforce the right things. Guidance is more complex when those you seek to help are finding other routes to where they wanted to go.

El Pais suggested that this proved you could be a success at Barcelona “without being a model of punctuality and rectitude,” or without fitting the ethical code. It’s true, of course, but that framing may also be flawed. And it’s not just about one player; it’s about them all. Nor is it about one game or nine games, but all of them. This season and beyond.

“It’s not so bad. I have seen lots of players oversleep,” said former sporting director, Robert Fernandez, and he was right. “What I wonder is why these stories come out so fast? The club should protect him.”

It is a telling, legitimate question in this issue, as in so many others — what interests lie beneath? — but part of the response might reside in that second line. At least, some at Barcelona see it like that: this was precisely about protection. There would be support but perhaps there needs to be shock, too. Valverde is a calm manager far from authoritarianism but silence, or acquiescence, is not always protection, and the fact that this became expressed publicly (by the coach, by Pique and by Suarez) owed something, rightly or wrongly, to the search for a solution. The perceived need to do something, to find a way through.

Had they done so? “He apologised and we accepted his apology,” said Carles Alena. It was time to show Dembele support and affection, he added. The Frenchman had promised it wouldn’t happen again. They hoped that the goals would and that they could find a way to accommodate him; there is a footballing dimension to consider as well, not just a disciplinary one. “There’s no need to kill him,” said Andres Iniesta. There was, a need to play him.

Dembele packed a lot into four days. To take his manager’s words, it had been some series: “The Dembele Phenomenon.” On Saturday, he had scored a wonderful goal in the derby. On Sunday, he missed training. On Monday, he said sorry. And then he did that against Tottenham.

“Only the chosen can score goals like that,” said Ernesto Valverde, the man who had chosen him to play that Tuesday night.