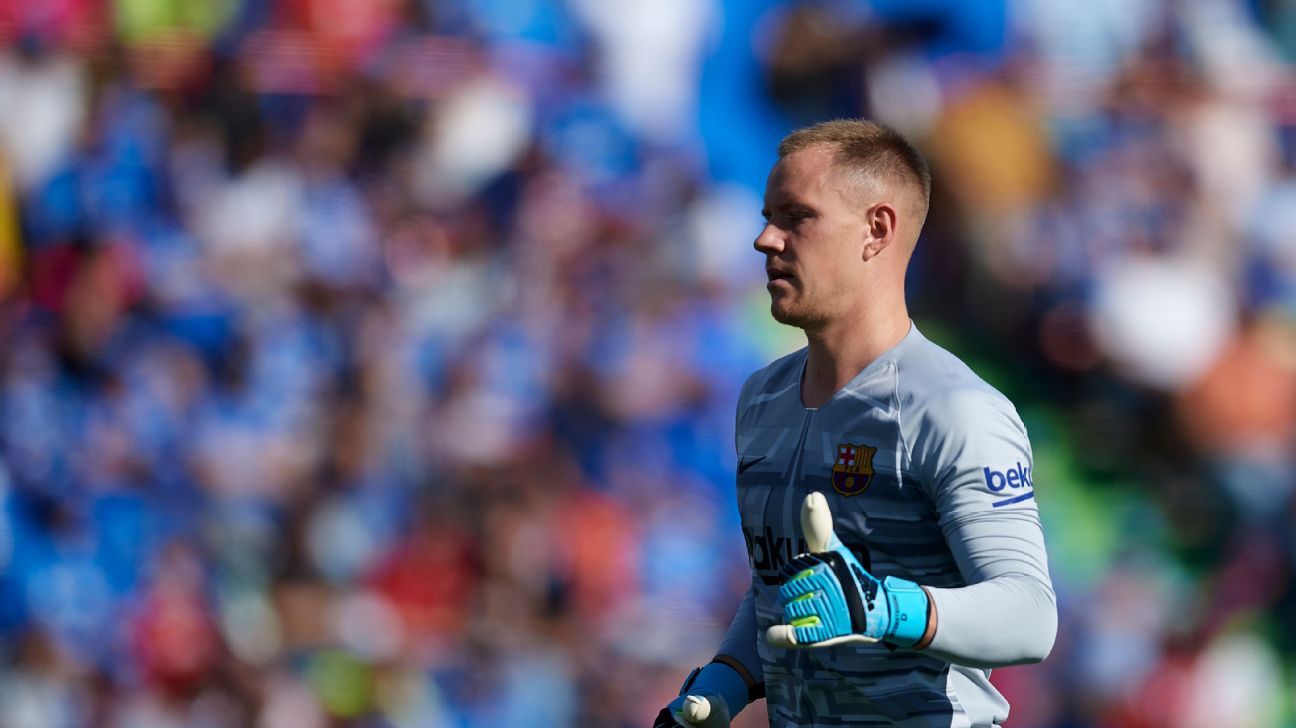 
Luis Suarez and Junior Firpo were on target as Barcelona beat Getafe 2-0 on Saturday to pick up their first away win of the season.

Suarez opened the scoring in the first half thanks to good work from goalkeeper Marc-Andre ter Stegen. Summer signing Junior Firpo then added the second after the break with his first goal of the campaign, tapping home after David Soria had saved from Carles Perez.

Clement Lenglet was sent off late on for picking up two yellow cards as Barca held on to the three points to move second in La Liga ahead of the rest of the weekend’s games.

Barcelona have ended their away-day blues — and with their first clean sheet in the league this season to boot. After four games without a win away from Camp Nou, the victory over Getafe should restore some confidence on their travels.

There was also a glittering performance from Ter Stegen. Not only did the goalkeeper make an important save from Angel Rodriguez when the game was goalless, but he also set up the opening goal. After sweeping up in defence, he picked out a fine pass for Suarez.

Barca were already without Lionel Messi and Ansu Fati for the trip to Madrid when, just over an hour before kickoff, they revealed Ousmane Dembele was also sidelined with a thigh problem. It’s the eighth injury he’s suffered since joining the club and leaves them short in attack ahead of upcoming games against Inter Milan and Sevilla.

They’re also short in defence, too. With Samuel Umtiti injured, they will be without the suspended Lenglet against Sevilla next weekend. Jean-Clair Todibo should stand in.

6 — Two wins in a week will ease the pressure on Ernesto Valverde for now but the performances are still short of what’s expected at Barcelona. His tactical changes ensured his side were able to see the game out in a relatively comfortable fashion.

GK Marc-Andre ter Stegen, 9 — The goalkeeper’s brilliant display comes amid a debate surrounding who should be Germany’s No.1. Certainly bolstered his case here with his hands and his feet.

DF Sergi Roberto, 6 — Started at right-back for the first time this season and spent a lot of time getting forward. A better fit at full-back than in midfield for this team.

DF Gerard Pique, 8 — His best performance of the season. Was particularly a colossus in the final stages when Barcelona were reduced to 10 men.

DF Clement Lenglet, 4 — Sent off for two bookings and will miss next weekend’s game against Sevilla. The second booking was unnecessary given Barcelona were in control of the game.

DF Junior Firpo, 7 — Scored his first goal for his new club with an easy finish from close range. Also made an important block on Angel in the first half.

MF Sergio Busquets, 6 — Some nice turns on the ball but also played Barca into trouble a couple of times.

MF Frenkie de Jong, 6 — Returned to the side after resting in midweek, playing in front of Busquets. Has looked better in a deeper role but rarely disappoints wherever he plays.

MF Arthur, 7 — Strong on the ball and smart in possession. Has made a great start to the new campaign.

FW Carles Perez, 6 — Returned to the team after being dropped in midweek and caused a few problems with his direct runs. His fizzing shot led to Firpo’s goal.

FW Luis Suarez, 6 — A resolute performance after being jeered by his own fans in midweek. Ended a three-game wait for a goal with a lobbed finish in the first half. Came close with a couple of other chances, too, but still looks short of his best form.

FW Antoine Griezmann, 6 — Did a lot of good (linking the play, tracking back, good movement) even if he won’t get the headlines on this occasion.

DF Nelson Semedo, N/R — Replaced Griezmann late on as Barca switched to a 4-4-2 formation for the final stages.

MF Ivan Rakitic, N/R — Came on for Busquets for the final 10 minutes with no noticeable involvement.

Premier League leaders Liverpool might beg to differ that corners are overrated for scoring
Bundesliga leaders Bayern get fright, Dortmund stay in touch and Havertz stars again
La Liga given green light to restart on June 8 by Spanish prime minister
Dortmund boss Favre hints at exit after Bayern defeat
Manchester City’s 2008-09 squad: Where are they now?