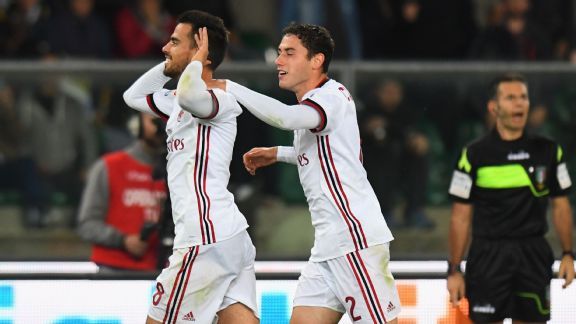 
AC Milan secured a 4-1 win over Chievo on Wednesday night, ending a wait of more than a month for a Serie A win. Suso, Hakan Calhanoglu and Nikola Kalinic all scored and Bostjan Cesar had an own goal. It’s a result that could give the Rossoneri a real confidence boost to spark a positive run of form.

Milan took their goals well and grew in confidence in the second half, which led to them playing much-improved football. After such a poor run of form, it was essential to pick up three points against Chievo.

For the first 30 minutes or so, there was still a real lack of fluidity and the performance was disjointed. The Rossoneri looked lost beyond the half-way line and couldn’t create anything as they had to rely on individual bits of quality to find a breakthrough.

6 — Vincenzo Montella still persisted with a back three, even though Chievo defended in numbers and Milan dominated possession. There are still question marks over his preferred system, but ultimately looking back, he got the desired result and key players made decisive contributions.

GK Gianluigi Donnarumma, 7 — Relatively quiet night and couldn’t do much for Valter Birsa’s goal. His key contribution came in the second half, though, with a top-class save to deny Nenad Tomovic as he finger-tipped his header onto the bar.

DF Mateo Musacchio, 6 — Poor marking on Tomovic in the first half could have proved costly and he lacked composure on the ball at times. However, put in an overall solid defensive shift to keep things tight at the back.

DF Alessio Romagnoli, 7 — Produced a commanding performance as he was switched into the middle of the back three. Good in possession, clean in the tackle and alert to danger to make one or two key interceptions in a very impressive outing.

DF Ricardo Rodriguez, 7 — Equally as good defensively as Romagnoli as he settles into his role in the back three, and continued to display his quality on the ball with countless passes switching the play over to the right flank to get Milan up the pitch.

MF Davide Calabria, 6 — Overall, he put in a decent shift without ever really being troubled or causing too many problems of his own. A steady display, and it’s hoped that he hasn’t suffered anything too serious after a nasty collision late on.

MF Franck Kessie, 6 — Perhaps fortunate not to be marked down for the inexplicable error which led to Chievo’s goal, but Kessie is undoubtedly getting back to his impressive level earlier in the season. Tenacious in midfield, and made powerful runs forward which led to a great assist for Milan’s third goal.

MF Lucas Biglia, 6 — Montella made the right decision to replace him in the second half as he was starting to look tired. More of the same from Biglia as he kept it tidy and provided decent coverage in front of the defence, too.

MF Fabio Borini, 6 — Put him anywhere in the starting lineup and he’ll do a job. Having been deployed as a right wing-back in recent weeks, he found himself on the left in an advanced position. He didn’t make a telling contribution, but it was another commendable effort.

MF Hakan Calhanoglu, 6 — Struggled in the first half and is under pressure to perform as a creative spark in this team. Delightful to see him get on the scoresheet with a great finish, which will likely be a huge boost for his confidence moving forward, one that was badly needed.

FW Suso, 8 — The Spaniard stepped up with a bit of class to break the deadlock, forced the own goal with a good delivery and then added an assist to his night’s work for the fourth goal. It was a quality performance from the playmaker, and hopefully he can now consistently have a big say in games as he is undoubtedly Milan’s main threat in attack.

FW Nikola Kalinic, 6 — Didn’t offer enough movement in the first half and looked isolated again while he also suffered with a lack of service. However, to his credit, he kept plugging away and eventually got his reward with a well-taken goal to wrap up the win.

MF Manuel Locatelli, 6 — Didn’t have a great deal of time to get up to the speed of the game, but slotted in well for Biglia to offer more energy and assertiveness in midfield to see out the win and keep Milan ticking.

FW Andre Silva, N/A — Arguably should have started this one, but showed the right attitude when coming on as he worked hard and may face Juventus on Saturday.