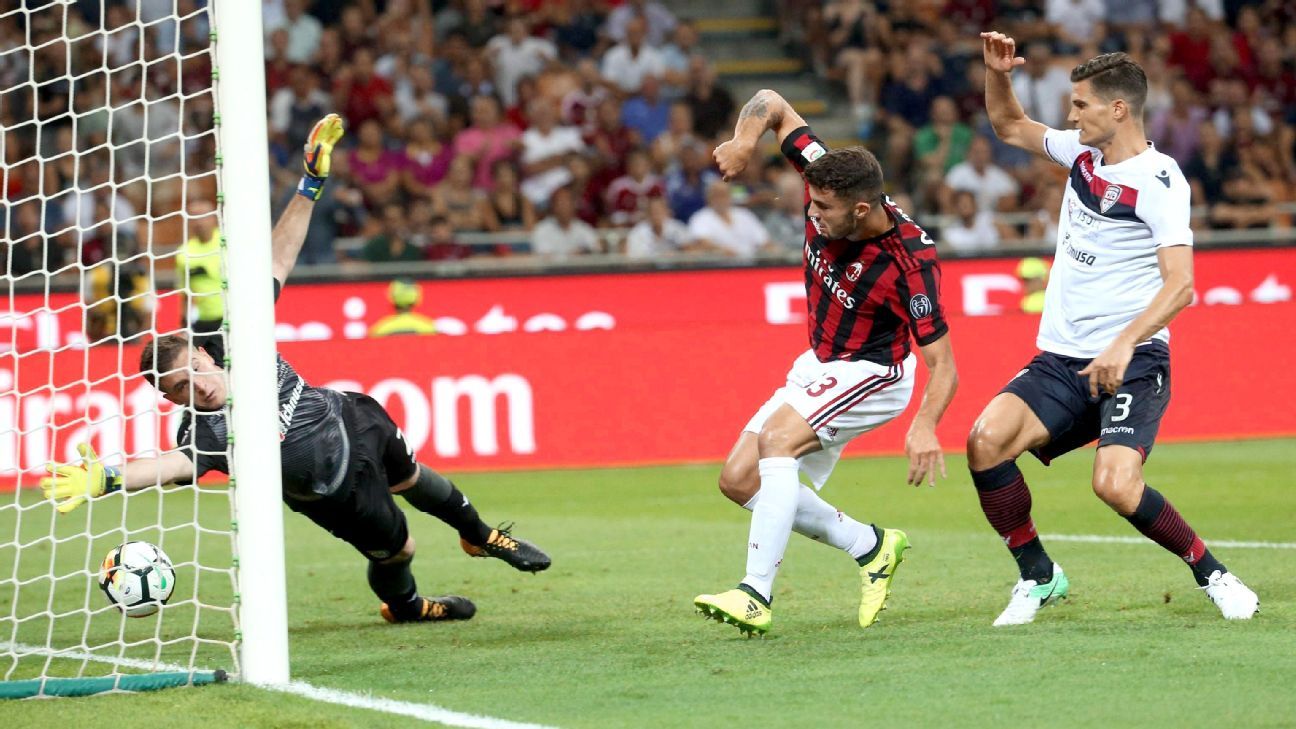 
A moment of magic from Suso rescued AC Milan on Sunday night, as they fought their way to a 2-1 win over Cagliari at the San Siro. Patrick Cutrone had given the Rossoneri the lead early on, but the visitors deservedly bagged an equaliser and will feel desperately disappointed not to return home with something to show for their efforts as Suso’s superb free kick sealed the victory.

Milan were very impressive in the opening 20 minutes. The team played with high intensity, energy and composure and that’s the standard they must play to. While they weren’t able to sustain that, it should be seen as a positive that they battled on and secured a win as the new signings continue to settle.

The drop in energy after the first 20 minutes was alarming. Cagliari were the better side for large periods and looked threatening, and so whether it was because of fatigue after four games in 10 days or just a general poor performance, there was reason for concern on Sunday.

6 — Vincenzo Montella could arguably have made his changes sooner to influence the game. Milan were clearly struggling, and he waited too long to help the team regain a sense of control on the game.

GK Gianluigi Donnarumma, 7 — Produced some important saves and was quick off his line on several occasions to sweep up any danger.

DF Andrea Conti, 6 — Tireless with his coverage of the right flank and was always an option going forward. Can’t afford to neglect his defensive duties though as he was caught out too often and will need to do better.

DF Leonardo Bonucci, 6 — The Milan captain was guilty of some clumsy defensive moments and he looked vulnerable with balls over the top. Some concerns that need to be ironed out, but will undoubtedly improve with time.

DF Mateo Musacchio, 6 — Similar to Bonucci in that he didn’t always look convincing dealing with Cagliari’s threat and the pair’s lack of pace was an issue with the movement and balls in behind. There’s nothing to be too alarmed about for either centre-half, but there’s certainly plenty of room for improvement.

DF Ricardo Rodriguez, 7 — The pick of the backline as he remained solid defensively for the most part while he matched Conti’s energy on his flank and showed great technical quality with his constant switching of the play.

MF Franck Kessie, 6 — Will have to learn from his mistake after running into trouble, which cost Milan as Cagliari scored their equaliser. However, it was another powerful and energetic display with plenty of positives as he looked to be suffering with fatigue given how much he’s played already this season.

MF Riccardo Montolivo, 6 — It was a positive showing from the midfield stalwart, but the defence wasn’t offered enough protection and that responsibility largely falls on him given his role in front of the backline. A tidy display on the whole though, as he battled hard and kept Milan ticking.

MF Hakan Calhanoglu, 5 — It was a night to forget for the Turkish international sadly, as he wasn’t able to influence the game and gradually errors began to creep in with more regularity. Still much to come from him, but he may just need a little more time to settle and deliver consistently.

FW Suso, 8 — A little predictable at times and his delivery wasn’t always on the mark, but decisive yet again. Registered an assist with a stunning delivery for Cutrone before scoring the winning goal of the game with a sublime free kick at a crucial point for Milan when they were really struggling.

FW Patrick Cutrone, 7 — The youngster just continues to deliver. Showed his football brain and eye for goal with some clever movement and a nice finish. Worked tirelessly off the ball as he pressed from the front to set the tempo for the rest of the team.

FW Fabio Borini, 6 — Deservedly received a standing ovation when substituted, as supporters will appreciate his industry and work. He never stopped running, and if he can just couple that with a bit more quality in the final third, he’ll be a pivotal part of this squad this season.

MF Lucas Biglia, 6 — A great debut as his calming influence in the heart of the midfield was evident immediately. Swept up danger and played simple yet effective balls out to set Milan on their way. Look forward to seeing him fully fit after the international break.

FW Nikola Kalinic, N/A — Didn’t have long to impress, but he pressed well and had moments where he threatened. Good to see him make him debut.

DF Luca Antonelli, N/A — Brought on in the closing stages for a little more energy and defensive coverage on the left flank.