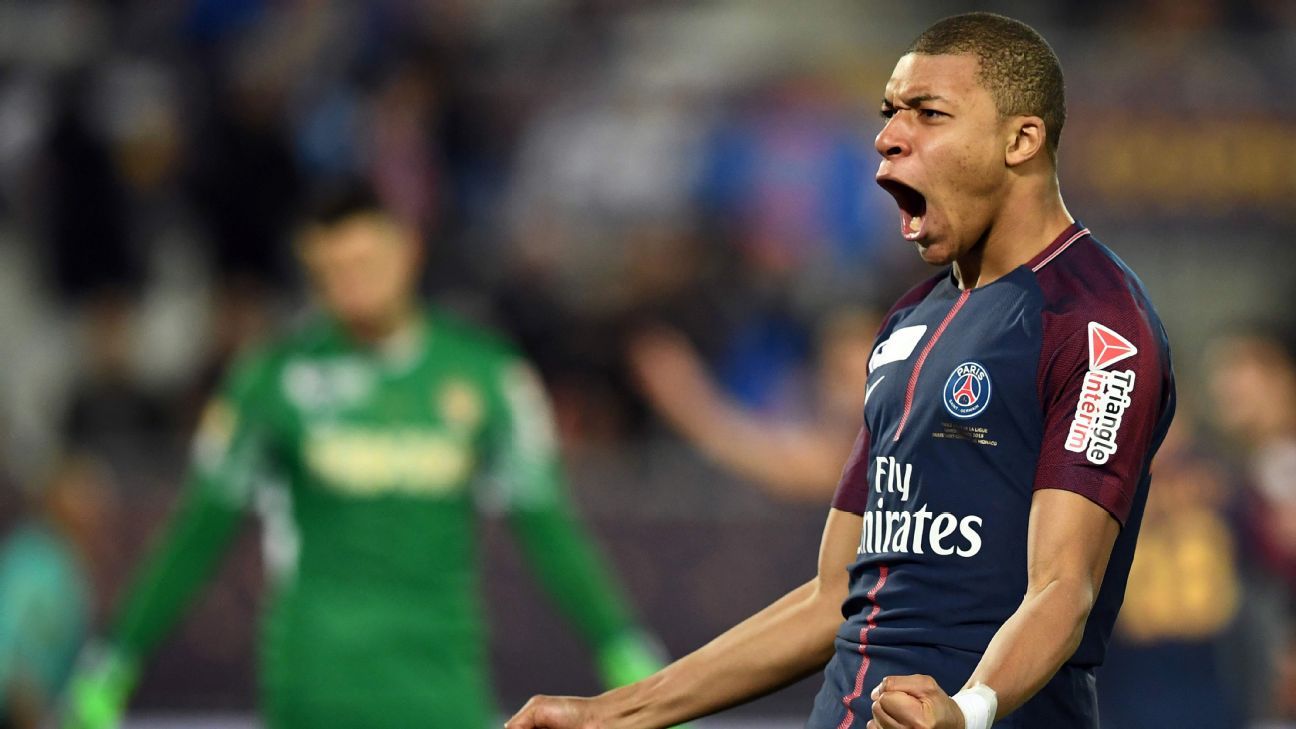 
PARIS — One season on from being dethroned as Ligue 1 champions after four consecutive titles, Paris Saint-Germain are close to snatching their crown back from Monaco.

Unai Emery and his players will not be able to seal the French capital outfit’s seventh triumph in Le Championnat with a win at Saint-Etienne on Friday, but victory at Stade Geoffroy-Guichard would set up a potential decider against Les Monegasques at Parc des Princes the following weekend. PSG still need 17 points from a possible 21 to hit the 100-point mark for the first time ever in the top flight, and they lead Monaco by 16 after the principality outfit could only draw at Rennes on Wednesday.

A rejuvenated Saint-Etienne away from home with multiple absentees will be no walk in the park, but if Kylian Mbappe & Co. can replicate their form from Saturday’s Coupe de la Ligue triumph against Leonardo Jardim’s men, then the potential title handover in Paris next week is very much on.

The 19-year-old was on fire at Matmut Atlantique, providing two assists and playing a key role in the third goal, as PSG won 3-0 for a fifth consecutive Coupe de la Ligue crown. The France international has come into his own lately, coincidentally since Neymar suffered a fractured metatarsal in his right foot and underwent surgery, so Emery wants to see greater from Mbappe between now and the end of the season.

“Kylian joined PSG to develop further,” said the Spaniard at his pre-match news conference on Wednesday. “He is young, but he has the potential and the desire to succeed.

“He had a great season with Monaco last time out and he has continued to make progress with us. Kylian is in good form at the moment, but he must keep performing well — each and every match.”

Emery is without the likes of Dani Alves, Marco Verratti, Julian Draxler and Thiago Motta for the Saint-Etienne clash, but Mbappe should form part of a formidable front three with Edinson Cavani and Angel Di Maria. Timothy Weah is also in the mix after being named in the 18-man squad, but Mbappe will probably start with the South American pair, with the American starlet possibly introduced during the match.

Whatever Emery decides to do in attack, he wants to come away from Le Chaudron with all three points.

“We want to win,” the Basque tactician told journalists at Camp des Loges. “We want to keep moving forward and to show everybody how strong we are. We want to keep going, win Ligue 1 and earn as many points as possible.”

However, Emery also recognised Saint-Etienne’s turnaround in form under ex-coach Laurent Blanc’s former assistant Jean-Louis Gasset and knows that it will be a challenge for his depleted side.

“Saint-Etienne made a very good start to the season under Oscar [Garcia],” said the former Sevilla boss. “When he left, the team started to doubt themselves and their results suffered. Under Jean-Louis, the team has improved, and they brought in several new players during the transfer window. Consequently, performances have improved, and results have followed.

“The atmosphere will be great inside the stadium — as always. It will be a great match between two in-form sides. For Sainte and their fans, this is a very important game. They want to prove that they can beat us.

“We must prepare well and be focused on the job in hand and stay that way for the full 90 minutes. We will have to play well to win this match.”

Emery has a few headaches in midfield with no Verratti, Draxler, nor Motta, but PSG’s firepower up top, spearheaded by a confident Mbappe, could be enough to undo a Saint-Etienne backline featuring January signing Neven Subotic. Thomas Meunier can step in for Dani Alves, while Adrien Rabiot, Javier Pastore and Christopher Nkunku should be able to collectively offset Verratti, Draxler and Motta’s absences.

Assuming that they do that effectively, PSG should be able to dispose of Les Verts and then look forward to possibly exacting revenge on Monaco for last season’s Ligue 1 title humiliation — depending on how ASM fare against Nantes on Saturday.

Another piece of silverware is inching closer for the capital club, and there is no better source of late-season motivation than the prospect of securing the title against their closest rivals.