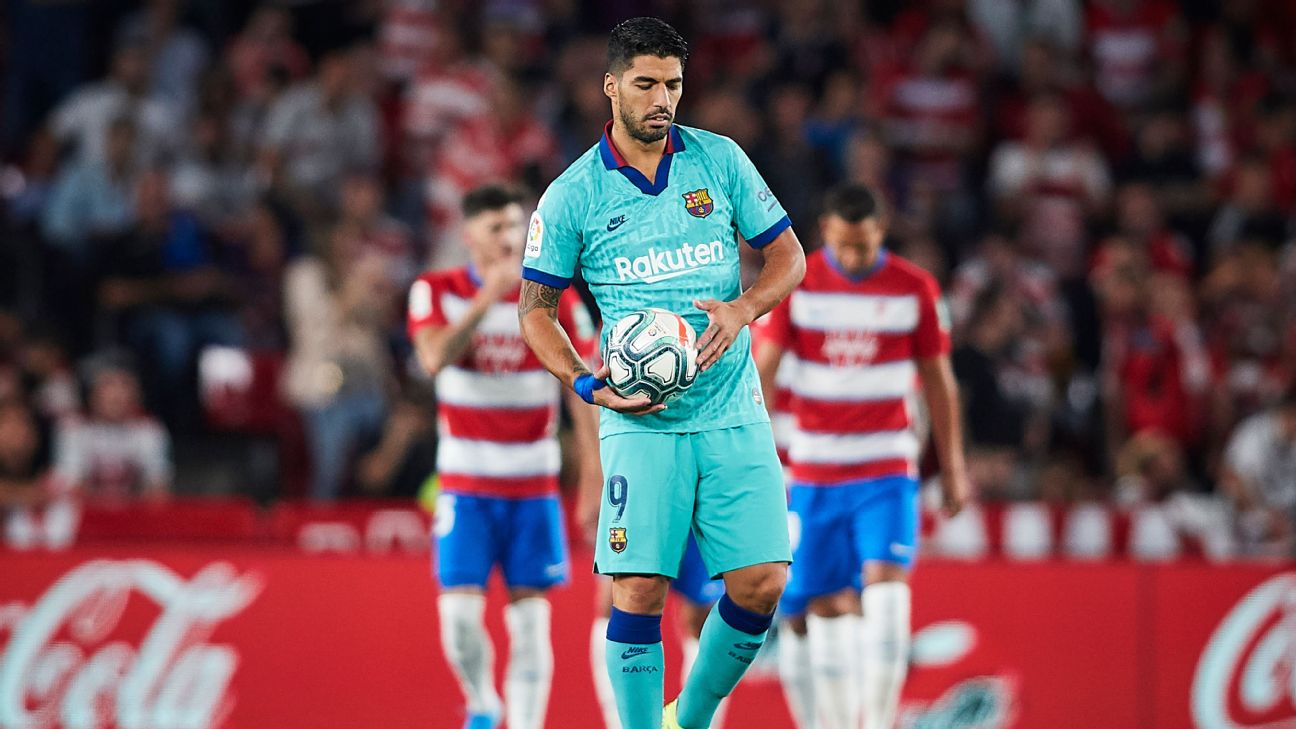 
Luis Suarez said Barcelona are anticipating a “long and complicated” season after their “worrying” loss to newly promoted Granada on Saturday.

Granada moved to the top of La Liga thanks to the result, with goals from Ramon Azeez and Alvaro Vadillo in each half helping them seal a 2-0 win at the Estadio Nuevo Los Carmenes.

For the Blaugrana, it represented their second defeat in the league away from Camp Nou this season. They were also held 2-2 at Osasuna, leaving them winless in their first three away La Liga matches for the first time since 1994-95.

Stretching back to last season, it’s now seven games without a win on the road in all competitions — eight if you include the Copa del Rey final played at a neutral ground — and they have their fewest points tally (seven) after five La Liga games since 1994-95, as well.

“It’s a worrying defeat, and one that hurts,” Suarez told Movistar after the game. “We have to take a look at a lot of things and be self-critical in order to improve moving forward.

“We’re not thinking about last season when we were champions, it’s about analysing the now. Analysing why we’re not winning away, because it’s worrying us. Analysing the lack of chances.

“We have to accept that we’re obliged to win games and we’re not doing it. There’s a long way to go [in La Liga], but these are the type of games that can give you the league. It’s going to be a long, complicated year.”

Barca’s sole shot on target at Granada came in the final 10 minutes — via Lionel Messi, who was making his first league appearance of the season as a substitute following a calf injury — but their defence is also letting them down.

They have conceded nine goals in five La Liga games, which is more than any other side in Spain’s top flight.

“I didn’t know that. and it’s not a good statistic for us,” coach Ernesto Valverde said in a news conference. “It’s not in line with our numbers from the last few seasons.”

Valverde admitted: “I’m worried because away from home, we’re not getting good results. When that happens in several games in a row, it means you’re not playing well. We’ve been especially bad away from home.

“We’re lacking something in the final third. Granada tried to press us, and we played out from that, but then it’s a question of creating more danger. We will try to improve.”

The Barca coach said the buck stops with him when it comes to looking for who’s to blame for his side’s poor form, although he also paid credit to Granada.

“You always feel responsible for what happens,” he said. “The players are the actors on the pitch, but at the end of the day, it’s the coach who is responsible. You can lose a game, but when you lose, you need to do so deserving more. That wasn’t the case today.

“But credit to Granada. They were intense. They made it uncomfortable for us.”