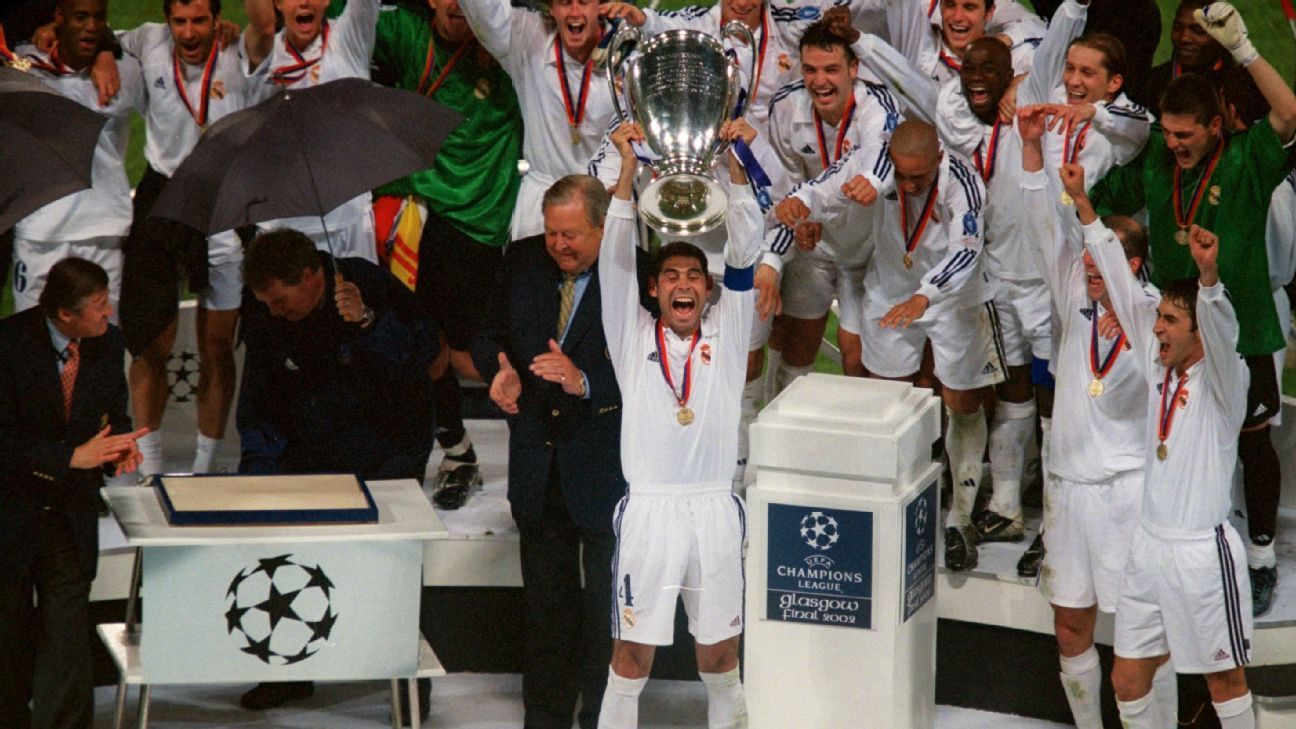 
Growing up at Liverpool, Steve McManaman knew what it was to have success expected. The Anfield club had won 18 English league titles and four European Cups, after all. But when the midfielder moved to Real Madrid in 1999 — seven-time winners at the time — things went up a notch.

“The expectation of winning the European Cup was almost as if it was a done deal every year,” McManaman tells ESPN FC. “You’d walk around the stadium and there’d be pictures of [Alfredo] Di Stefano, Gento, that great team in the white who won it five years on the trot and it was almost in your face all the time that this is what we did in the past and this is what we need to do in the future and the fact that I joined them in ’99 and they’d won it in ’98; again, it was sort of ‘right, we’ve won it for the first time in a while, we need to win it again.'”

And it wasn’t just framed photos on the wall; the players were reminded of the club’s history in other ways.

“We all got given a booklet — the ‘libro’ of Madrid — with the values of how Real Madrid should be,” says McManaman. “If we lose we shake hands, we don’t berate the referee, that sort of thing. And in each package there was a white Di Stefano shirt.”

McManaman joined a team managed by Vicente del Bosque, who played for Los Blancos in their 1981 European Cup final loss to Liverpool, and walked into a dressing room full of players, who had won the competition the previous year. History was all around.

“They all knew what it meant and how important it was,” says McManaman. “If anything, winning the league was secondary; it was winning the Champions League and showing how powerful Real Madrid was in the history of all football.”

The 1999-2000 season saw Madrid finish a lowly fifth in La Liga and go out of the Copa del Rey and FIFA Club World Championship at the semifinal stage. But they found form in the Champions League, knocking out 1999 winners Manchester United and finalists Bayern Munich en route to a Paris showdown with Valencia.

“You join the likes of Madrid to play in these big games and to play against the best teams in the world and test yourself in the best competitions so there was never any pressure,” says McManaman. “The pressure was always reaching that stage; once you got there it was just about finishing the job off. When people asked me last year who I thought would win out of Madrid and Juventus I said that I thought Madrid would win it because they know how to win the trophy in the end; they’ve got that experience to get over the finishing line and that counts for so much. And we felt that at the time.”

Madrid beat Valencia 3-0, with McManaman scoring the second goal in an impressive individual display that capped his first season at the club.

“People were saying I was man of the match so they’d go ballistic about you in the papers,” he says. “You scored in the first year you’d been there, you win this coveted trophy and you go back to millions of fans on the streets so you sort of feel justified in most things you’ve done.”

Madrid lifted the trophy again two years later by beating Bayer Leverkusen at Hampden Park. Meanwhile, either side of their Champions League triumphs, they claimed Liga titles but fell at the semifinal stage in Europe; McManaman admits the feeling of domestic success was a little different.

“(In 2003) we got knocked out in the semifinals to Juventus but we should have beaten them and won the Champions League,” he says. “We had loads of injuries and missed a penalty. We won the league quite comfortably but it wasn’t the same; the Champions League was seen as more important at the time, even though the league is right across the whole season. We sort of expected to win the league every year.”

Little did anyone know at the time that the 2002-03 season, McManaman’s last in Spain, was the first of 12 years without a European Cup for the competition’s most successful club. As it went on, he says, the barren run had a negative impact upon the ways things were done at the club.

“The number of managers they had, the transfer policy that Florentino Perez was putting into the team and the fact that he had to step down, but then came back with the proper idea of how to run the team and how to take the team forward. Also, the emergence of Barcelona at the time was like a double whammy.”

It took a last-gasp equaliser from Sergio Ramos to deny Atletico Madrid but Real finally got their hands back on the trophy in 2014. By then, McManaman’s former teammate Zinedine Zidane was part of the club’s coaching staff and serving as assistant to manager Carlo Ancelotti.

At the start of 2016, following the sacking of Rafa Benitez, Zidane was appointed first-team manager, since when Los Blancos have won back-to-back Champions League titles during a trophy-laden period for the club.

“I think a big help has been the fact the he has the history of the club at his heart,” says McManaman. “I know he played for other teams prior but he’s lived in Madrid since he retired, he was a superstar at the club and has been heavily involved, whether it was as the sporting director, or assistant manager to Carlo or whether it was manager of the B team so, for me, it was always nailed on that he was going to manage the first team.

“I presume he is a quiet man, who gets his point across,” continues McManaman. “He’s a bit like Del Bosque in that he keeps the whole squad happy, changes the team around at times so everybody’s happy and, more importantly, he’s got the utmost respect of all the players and I think that helps a lot. When you are being told ‘do this, do that; I think it would be better like this’ and he’s the one who’s doing it and he’s telling you in the right type of manner, not being condescending, I think it was only a matter of time before he would be a superstar.”

McManaman suggests that, such is the quality of Madrid’s squad, it “only needed tinkering a little tiny bit to be back on form.” However, the continuity of having a manager who knows the club so well has been vital.

“I think once they went through the superstar managers like [Jose] Mourinho, [Fabio] Capello, Ancelotti, that group runs out and I think, in the end, you have to have a plan of succession of what we’re going to do when this manager leaves.”

Zidane inherited a team full of star names, such as Cristiano Ronaldo, Gareth Bale and Sergio Ramos, but has also been able to integrate younger players into the squad on a more regular basis.

“Isco has been around for a while on the periphery but when he has got into the team, certainly last year he really excelled,” says McManaman. “[Marco] Asensio has always had a good name about him but to break into the team and score the goals he has scored in such a short space of time is amazing, really. Theo Hernandez is going to be good, Dani Ceballos starred for Spain’s Under-21s in the summer so they have gone round hoovering up these kids without paying big money, to complement what they have got.”

A feature of Madrid’s success last season was that it came about despite a reduced role for Ronaldo, now 32, who was rested more frequently. That, says McManaman is testament to Zidane’s managerial style, as well as the depth of quality boasted by the squad overall.

“It helps when you go to Deportivo — and you rest Ronaldo — and Asensio and Isco and everybody plays and you win 6-2! If they lost then Ronaldo plays every single game. As soon as that changes, that’s when the pressure starts to build.”

Until last season, no club had ever claimed back-to-back Champions League titles. Perhaps fittingly, the competition’s most successful team was first to do it and now, as the 2017-18 group stage gets underway, Madrid are chasing an unprecedented third straight triumph. McManaman says they “look the standout team across Europe again” and is among those, who believe they can win it again.