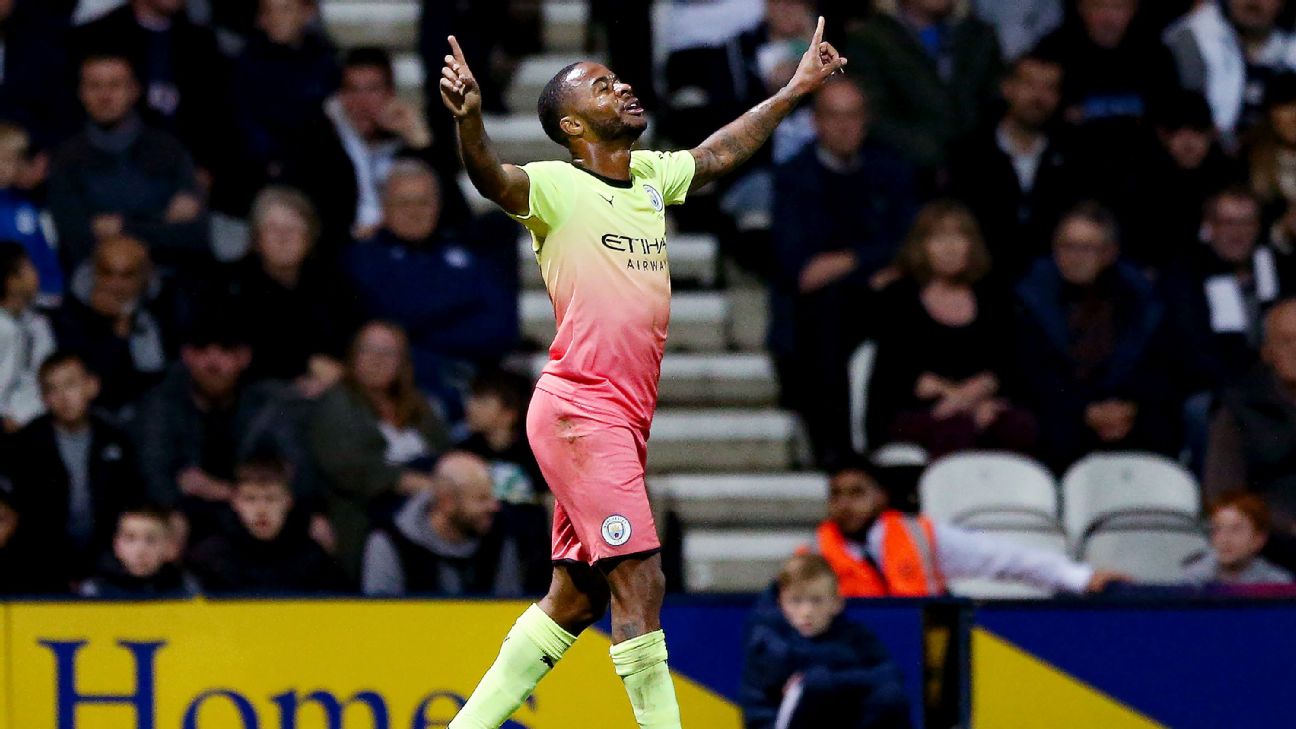 
Manchester City breezed into the fourth round of the Carabao Cup with a comfortable 3-0 win over Preston North End on Tuesday at Deepdale.

Raheem Sterling was a joy to watch as he tormented the Preston defence with his direct running, and a fifth clean sheet of the season was acquired with minimum fuss.

On another night, it could well have been a five- or six-goal haul, but City fans won’t care one bit.

7 — Pep Guardiola’s lineup was a perfect blend of youth and experience, as City coasted through the game without needing to come out of second gear.

GK Claudio Bravo, 6 — Never seriously tested on a rare appearance between the sticks, but the Chilean dealt well with everything he needed to.

DF Joao Cancelo, 6 — A quiet night from a defensive point of view and was always looking to get involved in the final third alongside his compatriot Bernardo Silva on the right-hand side.

DF Eric Garcia, 6 — Started the buildup for City’s opener with a tidy pass through the lines to Sterling and could have found himself on the score sheet in the second half, but he skewed wide when stretching for a David Silva cross. A composed display from the 18-year-old.

DF Taylor Harwood-Bellis, 6 — The slightly less adventurous of the two City central defenders, the 17-year-old will be happy with his night’s work. There were a couple of nervous touches in the first half, but he was never tested by a Preston attack that couldn’t lay a glove on the far superior opposition.

DF Angelino, 6 — The left-back will be disappointed with a first half that saw most of Preston’s attacking joy come down his flank, and his final ball was often wayward. He improved for the opening 15 minutes of the second half before being replaced by Benjamin Mendy on the hour mark.

MF Ilkay Gundogan, 6 — Denied a superb assist by the offside flag when he cut the Preston defence wide open with a delightful through ball in the first half, the German was always in control as City dominated the ball.

MF David Silva, 6 — The Spaniard had one of his quieter games in a Manchester City shirt but popped up in the penalty area — as he so often does — to provide the cross from which a wicked deflection gave them the third goal. He was replaced by youngster Adrian Bernabe for the final half hour.

MF Phil Foden, 6 — He knitted play together nicely, was always showing for the ball and was unlucky not to find the net with a thumping shot that crashed off the bar in the second half.

FW Raheem Sterling, 8 — City’s standout player gave his full-back Darnell Fisher a whole host of problems with his searing direct runs and made a great individual dart through the Preston spine before finishing for 1-0 via a fortunate deflection. The England man then played in Gabriel Jesus for City’s second and David Silva for the third. He was replaced by Riyad Mahrez in the 73rd minute.

FW Bernardo Silva, 6 — The former Monaco man was constantly swarmed by a Preston defence keen to deny him space to operate, and he often cut a frustrated figure as he looked to make things happen. It was not his night, following his Premier League hat trick at the weekend.

FW Gabriel Jesus, 7 — The Brazilian always looked like he had a goal in him and confidently fired through the legs of Preston goalkeeper Connor Ripley for 2-0, but he should’ve added to his tally when he headed wide from 6 yards out early in the second half. The City No. 9 really should have left Deepdale with the match ball.

DF Benjamin Mendy, 6 — The Frenchman was always an option on the overlap as he slotted in at left-back.

MF Adrien Bernabe, 5 — Didn’t really get into the game too much but weaved through the North End defence to help set up a late chance for Jesus.

FW Riyah Mahrez, N/R — A bursting run through the Preston half helped set up of Jesus for a shot on goal.