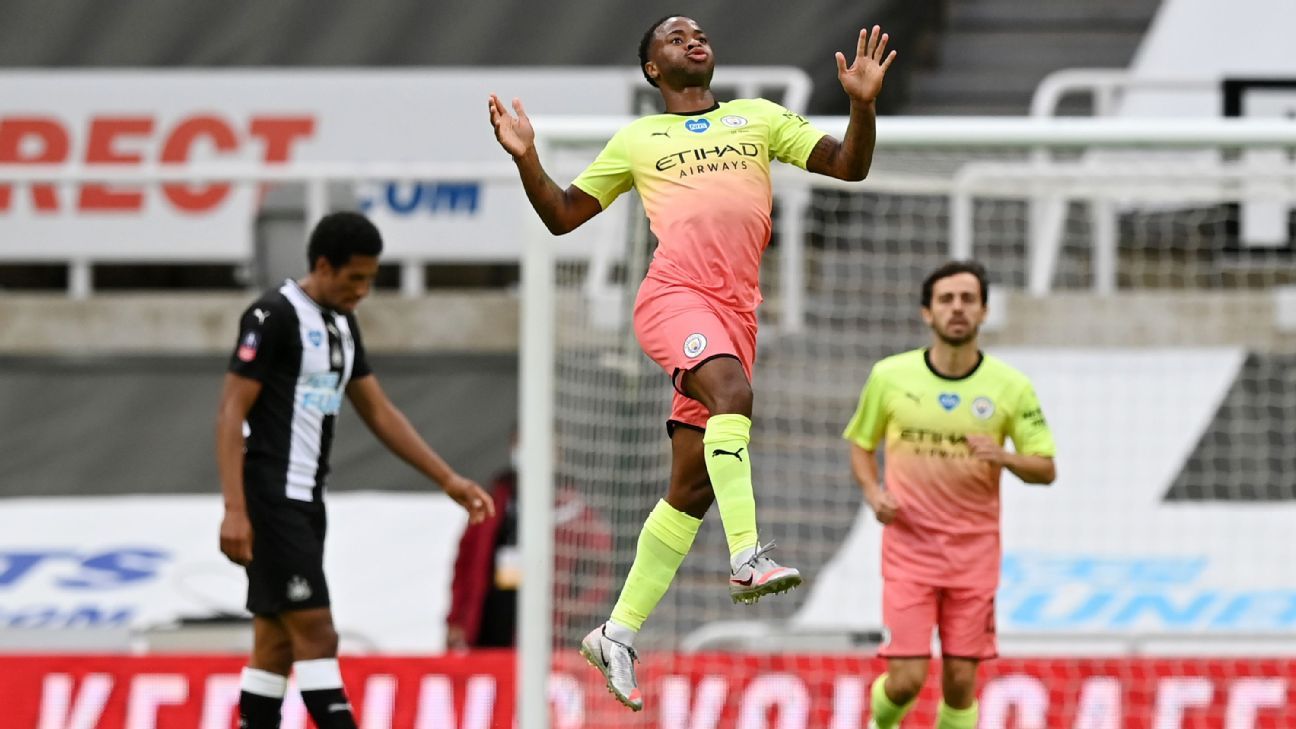 Manchester City booked their place in the last four of the FA Cup with a 2-0 win over Newcastle on Sunday.

Pep Guardiola’s side will play Arsenal at Wembley in the semifinals after a Kevin De Bruyne penalty and a goal from Raheem Sterling earned them a comfortable victory at St James’ Park.

De Bruyne scored his 12th goal of the season from the spot after referee Lee Mason spotted a push on Gabriel Jesus by Fabian Schar. Substitute Dwight Gayle missed a gilt-edged chance to make it 1-1 only for City to go down the other end and seal the result thanks to an impressive finish from the edge of the box from Raheem Sterling.

– ESPN+: Stream ESPN FC TV daily and 30 for 30: Soccer Stories
– What did you miss? The latest from Europe’s top leagues

Defeat at Chelsea and Liverpool clinching the title made it a difficult week, but it ended with a place in the FA Cup semifinals. There is a lot left for City to play for this season, and the performance at St James’ Park was proof enough that they’re not just going to switch off now that the Premier League is officially gone.

City dominated the game but the result might have been different had Gayle not wasted a glorious opportunity to equalise minutes after coming on as a substitute. An error from Nicolas Otamendi gave Allan Saint-Maximin the chance to cross but from six yards out and with the goal gaping, Gayle found a way to blast his finish over the bar.

7 — The City manager is determined to keep his players as fresh as possible during this packed end to the season, but after relinquishing the Premier League title, he wants to win the FA Cup. Guardiola picked a strong team with De Bruyne, Sterling and Aymeric Laporte, and it meant Newcastle never looked likely to cause an upset.

GK Claudio Bravo, 6 — Newcastle managed just one shot on target, which says everything about how busy he was.

DF Kyle Walker, 7 — Found Jesus with a cross smashed across the penalty area and created the danger that led to Schar conceding a penalty.

DF Benjamin Mendy, 7 — Didn’t have much defending to do and was allowed to play as an auxiliary winger for much of the evening.

DF Nicolas Otamendi, 6 — Got away with an awful pass across goal that went straight to Saint-Maximin and led to the golden chance for Gayle.

MF Ilkay Gundogan, 7 — Played as a quarterback for much of the game, popping passes around with very little pressure from Newcastle.

MF Kevin De Bruyne, 7 — Made the penalty look easy by sending Karl Darlow the wrong way. His passing was as good as ever.

MF David Silva, 7 — Smart cut-back to create an early chance for Riyad Mahrez. Substituted early to save his legs.

FW Raheem Sterling, 8 — Saw a good effort beaten away by Darlow in the first half and put the game to bed with a wonderful goal after cutting in from left.

FW Riyad Mahrez, 7 — Should have hit the target with the first chance of the game but fired over. Kept shooting and was unlucky not to end with a goal.

FW Gabriel Jesus, 7 — Caught out by Kyle Walker’s drilled cross that flashed wide off his heel. Got in a good position to win the penalty.

MF Rodri, N/R — On for De Bruyne but didn’t make much of an impact.