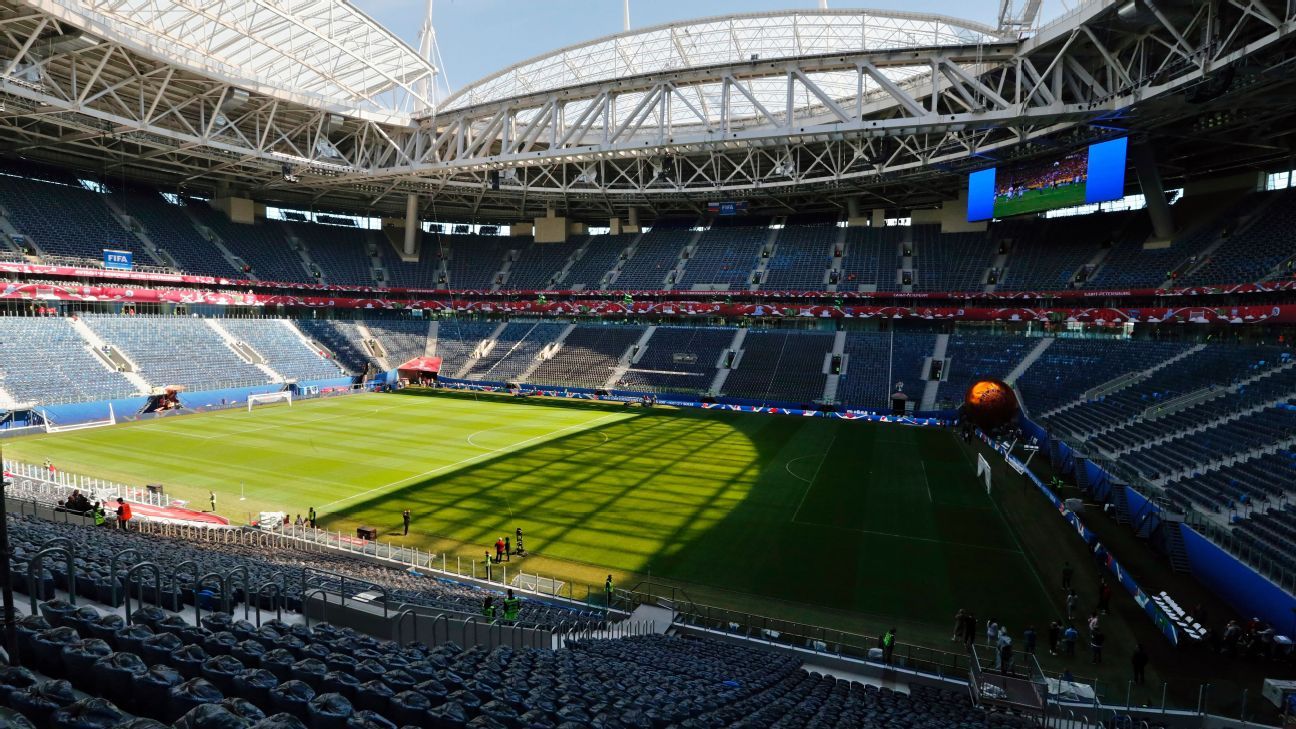 
ST. PETERSBURG, Russia — Ahead of the Confederations Cup final on Sunday, the pitch remains the most troublesome issue of St. Petersburg Arena, and it is likely to pose a significant problem heading into the World Cup preparations.

Cristiano Ronaldo famously complained about the surface following the game against New Zealand at the group stage. The Portuguese captain claimed: “It was a difficult pitch, where the grass was somewhat too long, and it was impossible to play better than we did.”

Colin Smith, FIFA’s director of competitions, subsequently said that the pitch should be ready to stage the big game between Germany and Chile: “We are confident that it will be a good playing surface for the final.”

Smith added that weather had not helped the situation, and the officials must be disappointed with a lot of rain in St. Petersburg this week. However, the problems run much deeper, and it is doubtful whether the issue can be fully resolved until the World Cup.

It must be remembered that Zenit St. Petersburg were supposed to play their last three home fixtures in the Russian Premier League at the new stadium, but only did so twice. The pitch was absolutely unplayable during the games against Ural and Terek Grozny, and thus it was decided to move the match against Krasnodar back to the old Petrovsky Stadium. The grass was so bad at the new stadium that there was a need to bring in new, temporary surface for the Confederations Cup, but such a solution proved to be insufficient.

Tatyana Kopylova, editor in chief at Sport FM St. Petersburg radio station, explained the problem to ESPN FC: “The depth of the surface must be 50 centimeters in order for the grass to grow properly. However, the depth at St. Petersburg Arena was only planned to be 40 centimeters. Apparently, they might not have consulted the specialists when projecting the stadium, and now it is too late to change this. This is a retractable pitch, and it would be impossible to make the whole bed deeper.”

“The grass was very poor at the games against Ural and Terek, and it was obvious that it failed to grow. Now they tried to put temporary grass, but it looks like there are significant problems with it as well. It remains to be seen what could possibly be done ahead of the next summer, but the hands could be tied,” Kopylova said. ESPN FC tried to contact Aleksey Sorokin, CEO of the 2018 World Cup organizing committee, regarding the issue, but got no answers.

Remarkably, however, this is probably the only problem of huge importance ahead of the World Cup. Once ranked as the most expensive stadium in history, it was built at the cost of 43 billion roubles ($730 million at the current exchange rate, but a much higher number previously), is slowly starting to be liked by the locals, according to journalists.

“Obviously, it took a very long time to build it. The last match at the former Kirov Stadium took place in 2006, just after Gazprom acquired Zenit,” Kopylova said.

“The stadium was supposed to be finished by 2009, before Russia got the World Cup. The delay might have been a positive thing initially, though, because FIFA have their own rules, and plans had to be changed accordingly.

“Thereafter, there were constant delays, and it became sort of a local joke. There was a significant danger that the stadium won’t be completed in time for the Confederations Cup, and the city decided to allocate money from education and health-care budgets in order to finish the job. There was a huge public outcry because of that.

“The whole saga had lasted for ages, and I guess that many people who are not interested in football could assume that the stadium is still being built.

“However, Zenit fans are gradually getting excited about it. The old Petrovsky stadium is too small and outdated for such a big city, as well as a big club. Now we have a modern stadium with a retractable roof and a retractable pitch. It is comfortable to watch games there even when the weather is poor. The construction fiasco is behind us, and now it is time to enjoy it.”

There are still minor building problems inside the stadium, but that is only natural, Kopylova said: “It is like moving into a new flat. It can’t be perfect from the very first day.”

Ivan Zhidkov, editor in chief at Sport Den Za Dnem newspaper, agrees. “People are tired of hating that stadium. It is just boring to keep complaining about it,” he said.

“The construction is over, and it looks like the usual problems had been unavoidable, but now people just put the whole story behind them because the stadium is there to stay.”

Zhidkov, however, is quite optimistic about staging the World Cup in St. Petersburg.

“The organizers aspire to make St. Petersburg the flagship city of the tournament,” he said.

“It should be ready as far as accommodation, food, security, airport and transportation issues are concerned.”

Those aspects were indeed taken care of remarkably well during the Confederations Cup. The stadium is located at the tip of Krestovsky Island, about 25 minutes by foot from the nearest underground station. However, organizers allowed fans to use free shuttles to and from other stations, as well as the airport.

The order was almost exemplary after the group-stage games, as hundreds of volunteers did their best to make the atmosphere cheerful and exciting. At times there was a feeling of pure football festival. The locals definitely went out of their way in order to make a positive impression, and St. Petersburg passed the World Cup repetition with flying colours — but for the pitch.

And yet, unfortunately for St. Petersburg, the playing surface is one of the most important aspects, and a very innovative solution must be found to prevent a major downfall in 2018.