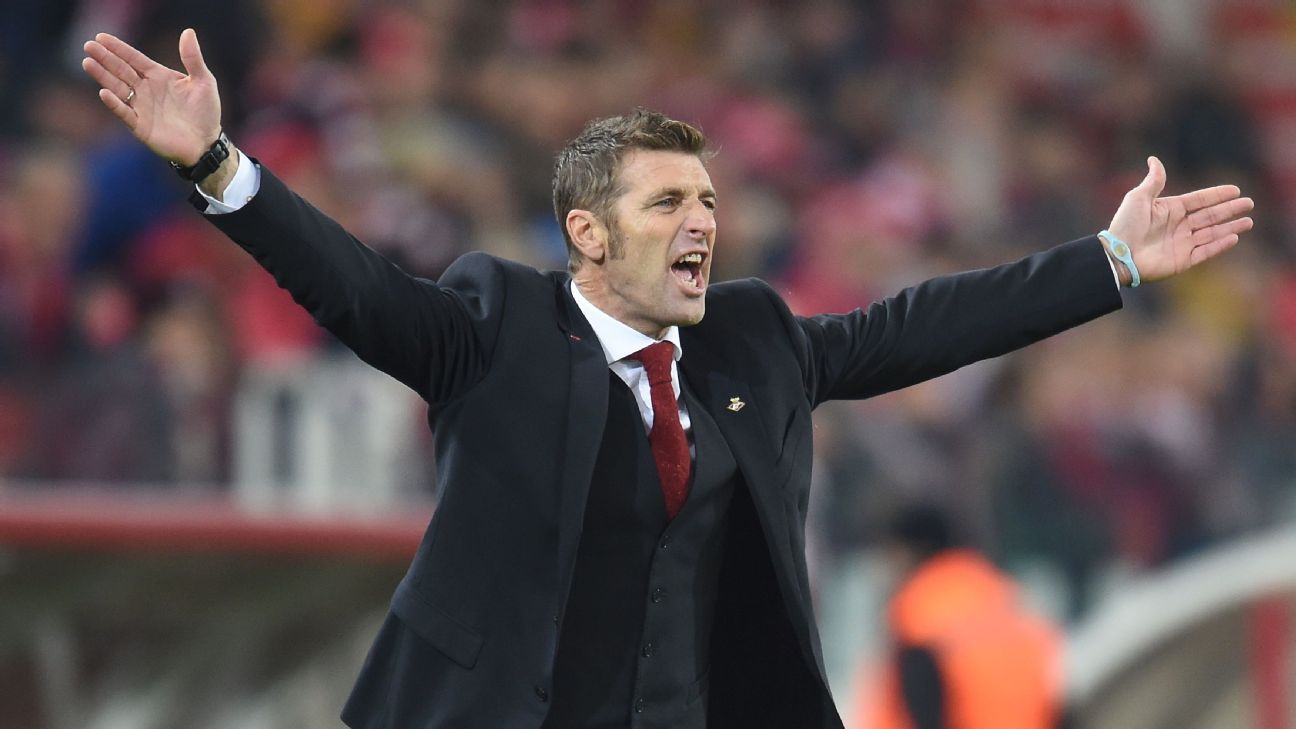 
Massimo Carrera became manager of Spartak Moscow by chance. After serving as Antonio Conte’s assistant at Juventus and Italy for five years, he was invited to the Moscow club to help out the defence. He accepted the challenge, but Spartak soon crashed out of the Europa League after losing to AEK Larnaca in the qualifiers and coach Dmitri Alenichev resigned. Only then, after the club failed to strike a deal with Kurban Berdyev, did president Leonid Fedun decide to give the Italian the chance.

It was a gamble that paid off. Nine months later, Spartak were crowned Russian champions after a 16-year wait for the title, finishing seven points ahead of local rivals CSKA.

“Hard work, determination and dedication — that’s what helps you reach the goals,” Carrera told ESPN FC in an exclusive interview. “The players followed me; believed in me. We managed to create a really cohesive group of players where everyone played and fought for each other. That was the main Spartak force last season.

“They had to kill egoism in themselves, stop thinking about their individual success and look at themselves as part of a big family. They have to fight for each other and to leave everything they have on the pitch. If you’re not giving 100 percent of what you can, you’re not doing it the right way and should quit.”

Spartak is to Russia what Juventus is to Italy. It’s the most popular club in Russia, with over 20 million fans, and Carrera knows he is under pressure to succeed.

“I felt what the Spartak fans are like when I came,” he said. “They’re exceptionally loyal to the team and even in bad times, which Spartak were going through for quite long, they’ve always stuck with the team. You feel their warmth, energy and their incredibly strong desire to see their team succeed.”

However, even when on the brink of sealing the title, Carrera was still being referred to as “the former assistant of Antonio Conte,” though the 53-year-old Italian is working on changing that description.

“It doesn’t really upset me to be referred to as ‘Antonio Conte’s former assistant’ or ‘the second Conte,’ as I have huge respect for Antonio, but let’s say I’m not the second Conte: I’m the first Carrera,” he said.

“I spent five years with Antonio working shoulder-to-shoulder — three in Juventus and two in the Italy national team — and I’m sincerely proud of this time. I should admit that everything I am now is thanks to him. How to train the team, how to communicate with your players, how to motivate them. He’s a true mastermind in all of this, let alone his tactical awareness.

“Antonio talks to each of his players before every match, telling them everything about their opponents: how they move, how they defend, how they attack, what their distinctive features are.

“So, any of his players stepping onto the pitch knows everything; not just about his team and what he should do in this game, but also everything about the opponents and what they can expect from each of them — from starters to substitutes. What I learned from Conte during this time is far more valuable to what I experienced working on my own in lower divisions.”

One of the most important things Carrera learned, especially at Juventus, was how important a winning mentality is to making a good team great.

“It’s actually the most difficult thing in football to make a team and instil the winning mentality in it,” he said. “You can have a good set of players but that won’t automatically win you titles. Any team can win a title. But to retain it and keep yourself at the very top for years to come is the hardest job in this game.”

Even now at Spartak, Carrera is constantly in touch with Conte, who moved to Chelsea this summer, and their close relationship helped Spartak loan one of the Premier League club’s rising stars in the summer.

“I’d been following Mario Pasalic for quite a long time and knew of his abilities so I asked Antonio if we could get him on loan,” Carrera said. “He’s a very intelligent, tireless player with a great vision and tactical awareness. I believe he has a bright future ahead of him.

“[Pasalic] wasn’t actually the only player I wanted from Chelsea. Kurt Zouma was also on my wishlist, and everything seemed settled for another deal, but at the very end Chelsea decided to keep him closer to themselves and sent him to Stoke City.”

Yet Spartak’s summer transfer window was less than perfect. Apart from loaning Pasalic, the club made only one notable signing, Brazilian attacker Pedro Rocha from Gremio for €12 million, while rivals Zenit St. Petersburg spent €85m on eight players and landed three more for free.

“I know there’s the Financial Fair Play rule but Zenit still signed the whole new team. It seems okay though as they sold quite big in the past years. But I don’t follow it much anyway, just know that it’s hard for any club in Russia to match them,” Carrera said. “As for us, we have three tournaments to play in — Premier League, Russian Cup and the Champions League — so have to get the most of what we have, trying to keep going, keep improving and keep winning.”

Indeed, with three defeats in 12 games so far in the Premier League, the 10-time Russian champions have not started their title defence in the best way — as they are 11 points behind leaders Zenit.

But being back in the Champions League is a major plus. Though Spartak were drawn in a tough group alongside Liverpool, Sevilla and Maribor, Carrera insists that he will bring the same philosophy to Europe that he does to every league game; an approach that has landed two points from two games thus far.

“The group is difficult indeed, but I will never say the third place will satisfy us,” he said. “Like I said, to get the maximum we have to give our maximum. Then, everything is possible. We’re aiming for the top and I’m sure we will all enjoy it.”

Artur Petrosyan is a Russian journalist based in Moscow. Twitter: @arturpetrosyan