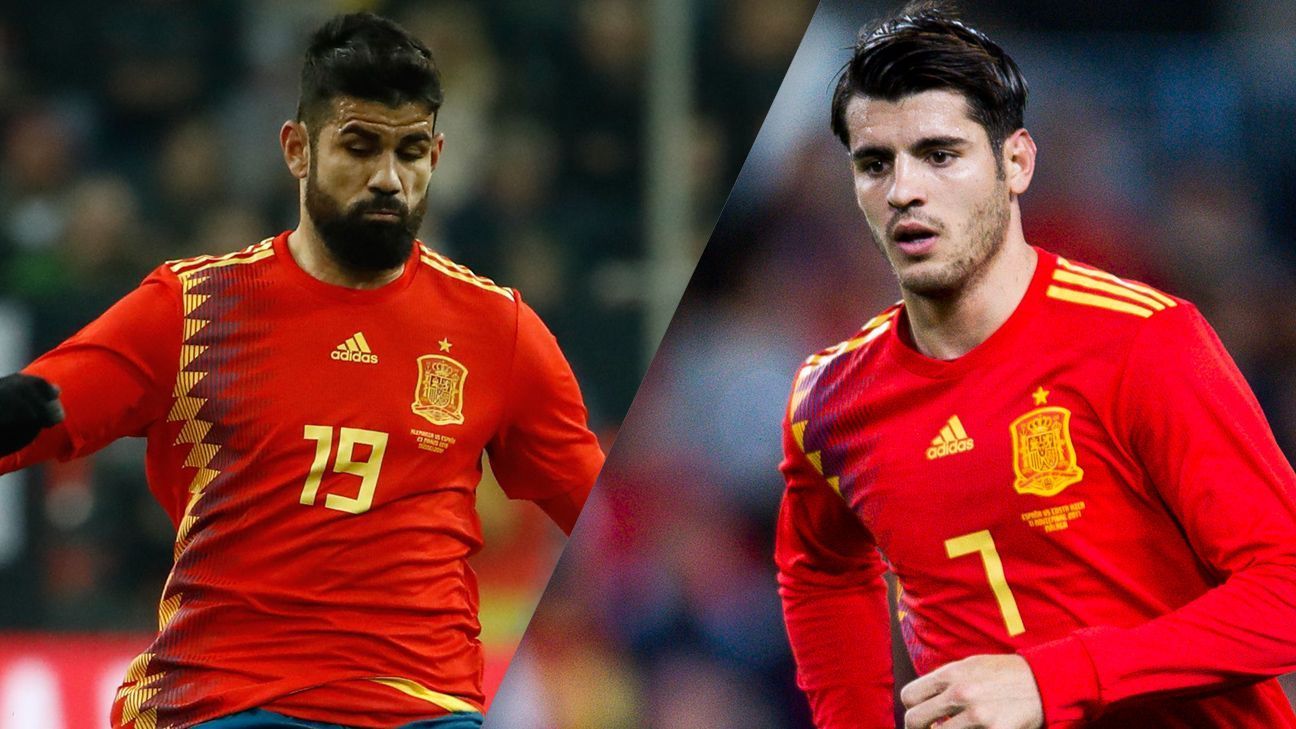 
The cheap conclusion, after Spain’s 1-1 draw with Germany, is that Chelsea have already ruined La Roja‘s outside chance of winning the 2018 World Cup in Russia.

The match, which alongside Tuesday’s test against Argentina represents Julen Lopetegui’s penultimate chance to work out how Spain play with a centre forward, was rightly celebrated for its searing quality and competitiveness.

What it also showed is that the 2010 world champions badly miss Alvaro Morata when he’s absent — particularly while Diego Costa is as prone to such a glaringly bad miss as he produced when faced with Marc-Andre ter Stegen.

Chelsea fell out with the striker and offloaded him to Atletico. Though instead of keeping and using him until January, then selling him, Costa was sent into the wilderness and spent six months without competitive football thanks to the FIFA ban that stopped Atletico from registering new players.

Costa may have made a material difference to Antoine Griezmann since the turn of the year (seven goals in all competitions until January; 16 in 12 weeks thereafter for the Frenchman) but Spain don’t play the same “second striker” system from which Griezmann benefits for his club.

Moreover, Costa hasn’t regained his own sharpness and confidence in front of goal. Twice in Dusseldorf against Germany he blew chances, including a one vs. one sitter when he could see the whites of Ter Stegen’s eyes.

Chelsea may well have been within their rights to do what they wanted with Costa but the striker can rightly be upset if, as he claims, it was a unilateral decision taken by manager Antonio Conte and communicated to him by text message — apparently to the displeasure of the Italian’s bosses at Stamford Bridge.

Right now the cost of Costa’s broken relationship with Conte is being paid by Spain. All things being equal, had the Brazilian-born Spaniard tucked away his gift-wrapped chance then Lopetegui’s team would have inflicted Germany’s only defeat since the Euro 2016 semifinal.

In his other major moment, he didn’t heed David Silva’s call to leave a 76th minute cross and Costa’s insistence on flying through the air to get a toe on the chance probably cost Spain’s current leading scorer the opportunity to slot home.

A significant pre-World Cup boost was frittered away, but the absence of Morata is perhaps more troubling.

He may only be 15th in the ranking of most used players since Lopetegui took over but it’s vital to remember three things.

Firstly, during Morata’s 430 minutes of Spain’s near two-year unbeaten run he’s scored seven times and produced some very handy assists. Morata has the great gift of being able to play as an outright No. 9 in either a 4-3-3 or a 4-2-3-1 formation — or he can drift to the right touchline dragging opponents with him and opening space for other regular scorers like Silva, Marco Asensio or Isco.

Secondly, Lopetegui already knows that Morata is a tournament player. And this is vital. In reaching the Under-17 World Cup semifinal nearly a decade ago, then winning both European U19 and U21 titles, Morata scored 12 final tournament goals to add to his three at Euro 2016. That his U21 title was under the stewardship of Lopetegui is also important.

Morata gives this Spain side pace, power, height, goals, assists, tactical nuances and, unlike Costa, he’s entirely at home with the one-touch pass and move matrix upon which Andres Iniesta, Sergio, Busquets, Silva, Isco, Asensio and Thiago all thrive.

Thirdly, for all the beauty, dexterity and tactical importance of Spain’s possession style of play, their three straight tournament wins between 2008-2012 came courtesy of 32 goals — 16 of which were scored by a centre forward. By which I mean David Villa, Fernando Torres or Dani Guiza (Morata style players) rather than when Cesc or Silva or Mata scored from the centre forward position as a “false No. 9.”

Spain’s hopes of success will live or die in Russia depending on whether a centre forward can score sufficiently for the supporting cast (from Asensio through Silva, Rodrigo, Isco, Thiago, et al) to provide the “additional” artillery.

That Morata has spent so long moribund under Conte at Chelsea is, right now, a major drawback but there are positives in both his and Costa’s cases.

Against Germany, Spain repeatedly emphasised their trend under Lopetegui that they are both equipped, and licensed, to put probing crosses or cutbacks into the opposition six-yard box: Costa’s feeding ground. There is also more of a license to play keep-ball deep (particularly late in a game) and then release a long pass into channels for Costa’s (or Morata’s) runs.

For example, take the greatest missed opportunity for Spain to knock the world champions’ crown off their heads: It was one of those brilliant Jordi Alba centres –meat and drink for a centre forward if, normally, it’s one of them arriving — but instead it fell to Isco.

Morata’s goal, and general performance, in putting Chelsea into the FA Cup semifinal against Leicester earlier this month not only showed his form and fitness but also his confidence after his return from injury. He, and Chelsea, have huge amounts to compete for between now and Russia: winning a trophy and trying to qualify for next season’s Champions League.

To hear Conte say in Barcelona the other week that Morata is a great player in the making and that he’s been impressed by the 25-year-old’s efforts to win his place back was hugely encouraging.

Costa is something of an enigma. He’s ferociously competitive at club level and now faces a similar situation to Morata. Atleti, if inspired, have the chance to win yet another European trophy and relegate Real Madrid to third place in La Liga — not insignificant incentives to a big finish to the season — but does he truly care as much about how he performs for his adopted nation? We are about to discover.

In theory, Costa will start against Argentina at Atleti’s Metropolitano stadium on Tuesday. He doesn’t look as if he’s in either the physical or mental shape to conjure up a definitive performance to demonstrate that he, rather than Rodrigo or Morata, should start against Cristiano Ronaldo’s Portugal in June. However, while Silva is absent for personal reasons and Morata in London gearing up for his vital next two months, this is a massive opportunity for Costa to demonstrate that he’s better and sharper than he showed in his cameo in Dusseldorf.

With two unusual characters like Morata and Costa firing on all cylinders, Spain might win the World Cup. Without them there’s no chance.