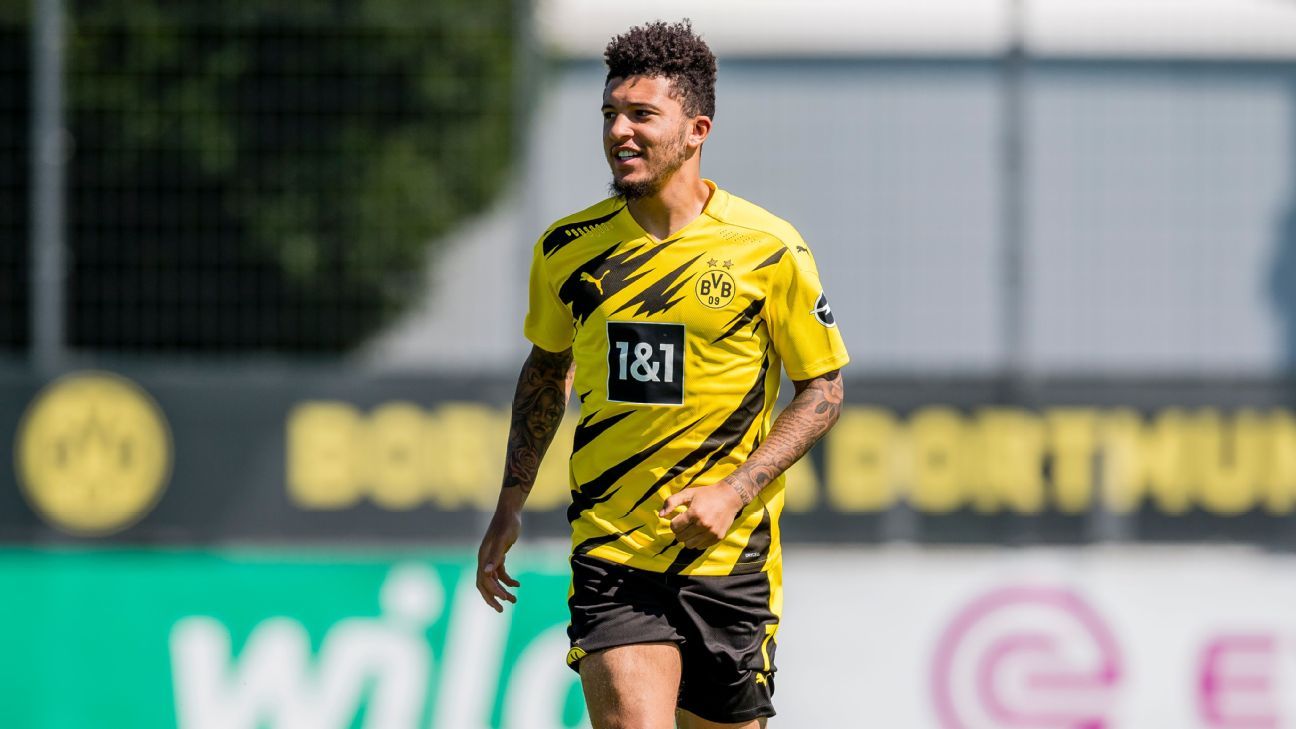 In this edition, there’s the latest on Manchester United’s pursuit of Jadon Sancho. Plus: Chelsea and Manchester City are keen on a pricey centre-back to sort their defences out.

Ole Gunnar Solskjaer wants Manchester United to accelerate their pursuit of Borussia Dortmund forward Jadon Sancho in order to avoid a repeat of last summer’s protracted move for Harry Maguire, which resulted in the club paying a world record £80 million for the Leicester defender.

Sources have told ESPN that United are in pole position to sign Sancho this summer, but the lack of serious rivals for the 20-year-old’s signature has led to the Old Trafford hierarchy believing that they can drive down Dortmund’s £80m valuation of the former Manchester City youngster.

Ed Woodward, United’s executive vice-chairman, is prepared to offer £50m for Sancho due to the financial impact of the coronavirus pandemic on the transfer market, but sources have said that Solskjaer and his coaching staff want the club to make a more realistic opening offer to ensure that a deal gets done quickly.

But with Leicester holding firm on their valuation, United eventually caved in to the selling club’s demands and, according to sources, left players and staff at Old Trafford bemused by the time that had been wasted, which could have instead enabled Maguire to arrive earlier at the club and have greater involvement in preseason preparations.

The delay in finalising a deal for Maguire resulted in the player only signing for United in the week leading up to the opening game of the season against Chelsea.

A similar pattern followed with the January signing of Bruno Fernandes from Sporting Lisbon. Fernandes completed a deal worth an initial £47m just 24 hours before the Jan. 31 transfer deadline, despite prioritising a move for the midfielder prior to the window opening at the beginning of January.

Sources have said that Sancho is Solskjaer’s No. 1 target this summer. While there is confidence within the club that a deal will be done, the short turnaround between the end of this season and the start of the 2020-21 campaign on Sept. 12 has increased the determination on the football side to seal a deal in a similar fashion to Chelsea’s swift and decisive moves for Hakim Ziyech and Timo Werner. — Mark Ogden

Chelsea and Manchester City are closely following the development of Atletico Madrid‘s Jose Maria Gimenez, sources have told ESPN, but face a tough battle to land the €120 million-rated centre-back.

City coach Pep Guardiola has made signing a centre-back a priority this summer but Atletico don’t want to negotiate below Gimenez’s huge release clause. Sources told ESPN on Thursday that City are also pursuing a deal for Bournemouth’s Nathan Ake.

Chelsea boss Lampard, meanwhile, believes Gimenez’s strength and experience would be an upgrade for a defence that conceded 54 goals in 38 Premier League games this season — 21 more than champions Liverpool.

Gimenez is 25 but a source close to Chelsea has told ESPN that Lampard believes signing him would be “like signing a 30-year-old centre-back” due to his vast experience in La Liga and for Uruguay at international level. Since signing from Uruguayan side Danubio in 2013, Gimenez has won the Europa League, UEFA Super Cup and Spanish Super Cup under Diego Simeone, as well as picking up two Champions League runners-up medals.

Sources have told ESPN that Chelsea have been following Gimenez’s development for some time and scouts from the London club have attended several Atletico matches to assess his performances. The same sources have confirmed to ESPN that Gimenez is well regarded but the club are still evaluating whether or not to sign a central defender this summer, with Lampard focusing on other areas first.

After completing the signing of Hakim Ziyech from Ajax and Werner from RB Leipzig, Chelsea intend to continue their summer overhaul with the signing of Bayer Leverkusen star Kai Havertz, as well as targeting a goalkeeper amid concerns over Kepa Arrizabalaga. Leicester City‘s Ben Chilwell and Everton‘s Lucas Digne are also targets in the left-back position while sources have told ESPN that Ajax’s Nicolas Tagliafico remains on Lampard’s radar.

Lampard already has Antonio Rudiger, Andreas Christensen, Fiyako Tomori and Kurt Zouma, so he would need to cash in on at least one to be in a position to land Gimenez.

Lampard and Guardiola are aware that Atletico boss Simeone considers Gimenez a key player and following Diego Godin‘s move to Inter Milan in 2019, he pushed for Gimenez to sign a new deal until 2023, with a release clause that is designed to deter potential suitors. — Rodrigo Faez

Lazio held talks with David Silva‘s camp in Rome last week in a bid to convince the Manchester City midfielder to join the club on a free transfer this summer, sources have told ESPN.

Silva, 34, played his last Premier League game for City last weekend and will leave the club when his contract expires after the Champions League next month.

We look back at past Premier League transfers with a simple question: Who was the best signing in the history of the competition?
• Full list: 100-51 | 50-1

Ex-Spain teammate Xavi Hernandez wants Silva to join him at Al-Sadd in Qatar, while two teams in the United Arab Emirates have also made a move for the playmaker.

Initial interest in Europe, including from former side Valencia, has gone cold since the outbreak of the coronavirus pandemic, but Lazio have made a move in recent weeks. Lazio coach Simone Inzaghi is pushing hard for the signing but Silva is focused on helping Man City win the Champions League. Sources have told ESPN he’s not closing any doors at the moment and is attracted by the idea of playing a season in Serie A. — Moises Llorens

Steve Nicol and Don Hutchison explain how David Silva makes football look so easy while on the pitch.

Real Madrid have seen a wave of interest in forward Takefusa Kubo following a sensational loan campaign at Mallorca this season, with Sevilla among those interested in another loan move, sources have told ESPN.

Kubo, 19, made 35 appearances and started 23 matches in La Liga for Mallorca this season and although the side were relegated, his performances — he scored four and set a further four up — caught the eye of a string of top-flight clubs, with Real Sociedad also keen on him. Sources have told ESPN that Sevilla are optimistic they can land Kubo for next season as they can offer the platform of Champions League football after finishing fourth in La Liga.

Real Madrid officials have been delighted with Kubo’s progress after signing him from FC Tokyo last summer, beating Barcelona to a player who spent four years at the Catalan club’s La Masia academy from 2011-15. Sources have told ESPN that Real view Sevilla and Sociedad as the two best options for Kubo, considering the club’s good relationship with their La Liga counterparts. Real loaned Sergio Reguilon to Sevilla last summer while Martin Odegaard starred for Real Sociedad in their run to sixth place in the league this season.

One of Kubo’s teammates at Mallorca told ESPN the player “has everything to succeed” in his career though sources said that Real Madrid are keen on him getting another loan move. The club are mindful that Kubo needs to develop physically to withstand the demands of playing top-level football domestically and in Europe.

Sources have also told ESPN that Kubo’s representatives want the player’s future resolved quickly this summer in order for him to focus on the next season as soon as possible. — Rodrigo Faez

Julien Laurens dissects every possible scenario of who could manage Barcelona next season.

Barcelona hope Ousmane Dembele can be their secret weapon if they make it through to the final eight of the Champions League in Lisbon in August.

In February, Dembele was ruled out for six months through injury but he returned to training this week and could be fit for the European competition.

“It will be a huge advantage to have him in Portugal because of the variations and pace he offers in attack,” a first-team source said.

However, Barca will have to get past Napoli first. They host the Italian side on Aug. 8 at Camp Nou having drawn 1-1 in the first leg in February.

At a push, Dembele could be among the substitutes for that game but if not, his absence may open the door for United States youth international Konrad de la Fuente. The teenage forward, who recently signed a new deal, has been training with the first team after impressing in Barca B’s failed playoff campaign last week.

Manchester United’s Under-23s are back in training but the players and manager Neil Wood still do not know what league they will be competing in next season, sources have told ESPN.

United are becoming increasingly frustrated at a lack of clarity regarding plans for the new campaign. Wood’s team were second in Premier League 2 Division 2 when the season was scrapped because of the coronavirus pandemic, three points behind leaders West Ham with a game in hand.

As well as being in the dark about which league they will play in, United also do not know when games will be allowed to resume. There is hope that a Premier League meeting scheduled next week will provide some answers.

Sources have told ESPN that the delay has been caused in part by the Premier League redeploying staff to ensure the first team league was able to finish and focus will now turn to the restart of academy football. — Rob Dawson

Leeds look to go back to the future with double swoop

Leeds United are targeting top-level experience ahead of their first Premier League campaign since 2003-04, with sources telling ESPN that former Elland Road youngsters Fabian Delph and Danny Rose are both being lined up for a return to the club.

Owner Andrea Radrizzani admitted last week that Paris Saint Germain’s out-of-contract forward Edinson Cavani is a potential target after revealing that Leeds failed in an audacious bid to sign Zlatan Ibrahimovic last season. But while Cavani would be an eye-catching signing for Marcelo Bielsa’s team, the pursuit of Delph and Rose highlights the club’s determination to ensure that the squad is equipped with proven Premier League performers next season.

England left-back Rose, who ended the season on loan at Newcastle from Tottenham, was sold by Leeds to Spurs as a 16-year-old in 2006 after being developed at the club’s academy, while Everton midfielder Delph made 44 league appearances for the club as a teenager before being sold to Aston Villa in 2009. — Mark Ogden