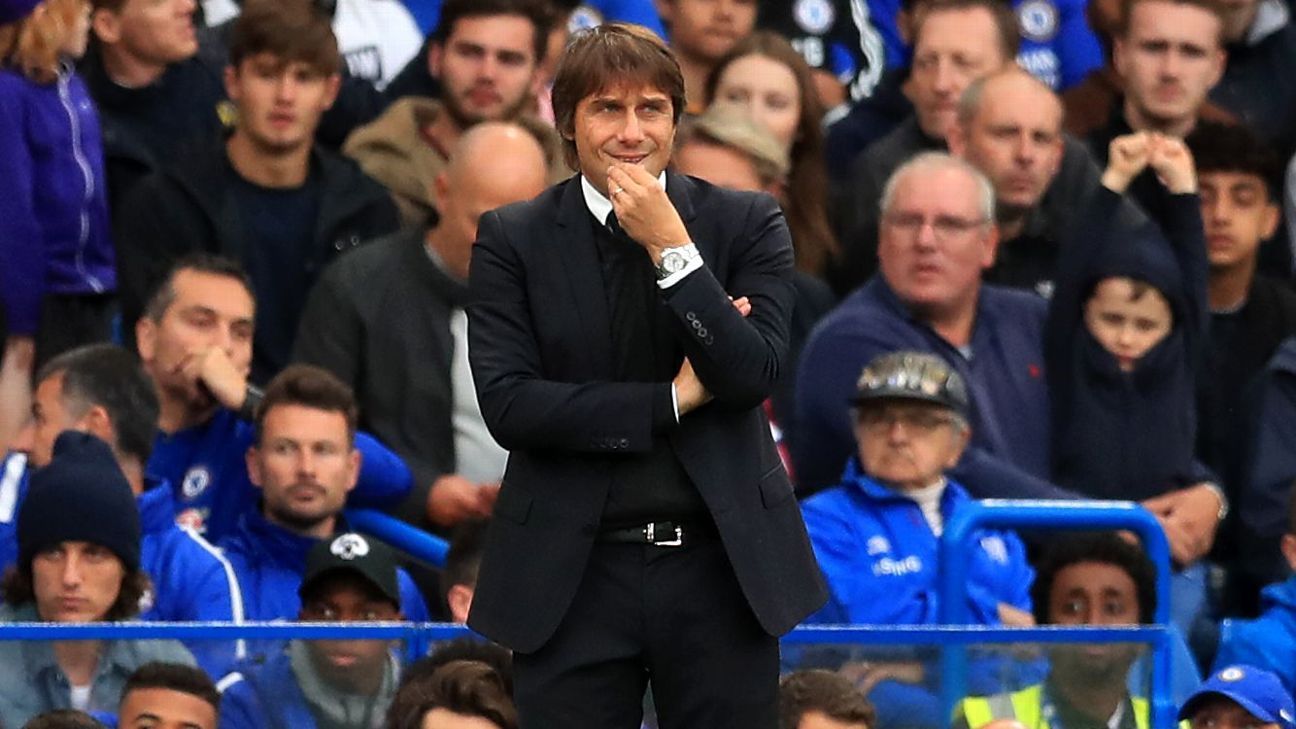 
For several months Antonio Conte has given off the weary air of a man meeting the challenges facing Chelsea with grim determination rather than his usual intense energy, but in the aftermath of Saturday’s lacklustre defeat against Crystal Palace his sceptical assessment of the landscape carried greater resonance.

“I think every season is different,” he told reporters. “Last season is the past. Now it is another squad, different players and for this reason, if we compare last season, we didn’t play Europa League or Champions League.

“This season we are facing four competitions, and we are having a few problems doing this. When you have a few injuries, you are in trouble. We mustn’t be happy. This season will be very difficult for us. For this reason we have to put 150 percent in; 100 percent won’t be enough.”

Chelsea were everything Conte hates in a football team at Selhurst Park: lethargic, unbalanced and utterly lacking in “personality” — all against a team that had failed to even register a Premier League goal prior to Saturday. In their opening-day defeat to Burnley they could at least point to a combination of misfortune and indiscipline, and in losing to Manchester City they were jaded and outplayed by elite opponents at the peak of their powers.

Unlike last season, Conte has also never been able to call upon his strongest XI, losing Alvaro Morata and N’Golo Kante to injury just as Eden Hazard had begun to show signs of rediscovering his best form after sitting out the whole of preseason with a broken ankle.

But the Premier League table doesn’t care for mitigation, and all defeats are of equal weight when the points are tallied. After eight matches, the wider picture painted is one that justifies Conte’s pessimism: if recent history is anything to go by, Chelsea’s title defence is already over.

That may sound overly dramatic, but the reality is that no team in the Premier League era has lost three of its first eight matches and gone on to win the title. On average the eventual champions lose just under 4.3 matches in a 38-game season. Having already tasted defeat three times in the first three months, Chelsea’s margin for further error between now and May is negligible.

Other champions have had poor starts. Manchester United went winless in their opening three matches in the 1992-93 and 2007-08 seasons, but on both occasions then propelled themselves back into contention with five-game winning streaks. Chelsea tied the Premier League record for successive victories with 13 wins in a row between October and January last season, and it’s hard to see them getting back into the title conversation without a similar run this time around.

No team has taken fewer than 14 points from their opening eight Premier League matches and gone on to win the trophy (losing to Palace left Chelsea on 13), and no team has overcome the nine-point gap that lies between Chelsea and leaders Manchester City at this stage. Larger deficits have been made up later in the title race, but the numbers since 1992 suggest that if you want to be champions of England, a poor start is a luxury that cannot be afforded.

It must be acknowledged that the fixture list has been less than kind to Chelsea, with matches against Tottenham, Arsenal and City in their opening eight games. That said, Conte’s men took four points from those three games, a middling but hardly disastrous return. Inexcusable defeats against Burnley and Palace are far more likely to prove their undoing.

Chelsea are now in a position where they would have to make Premier League history in order to retain their title. In terms of talent they are well capable, and Conte remains an exceptional coach, but believing in them at this stage would be so much easier if City didn’t look destined to break more than a few records of their own.

In the 25 seasons of the Premier League, only one team has managed to take the maximum 24 points from their first eight matches — Chelsea under Jose Mourinho in 2005-06. City have taken 22, a total matched only by two other teams in competition history (City in 2011-12 and Chelsea in 2014-15). Judging solely on results, Pep Guardiola’s team bear comparison with the most dominant early-season leaders we have seen.

Then there is the style in which City are achieving their results, scoring a ridiculous 29 goals in eight matches. The record for goals in a Premier League season is 103, set by Chelsea under Carlo Ancelotti in 2009-10. To do it, they averaged 2.71 goals per game. City’s average stands at 3.63 per game — a limited sample size, of course, but one that leaves them well placed to establish themselves as the most devastating attacking team seen in English football’s top flight for decades.

Asked about City’s rampant form after the Palace loss, Conte repeated a common mantra: “We know very well the potential of the other teams but it is important for us to look at ourselves.” The problem is that with Premier League history against them and potential history-makers ahead of them, self-reflection is unlikely to be enough.