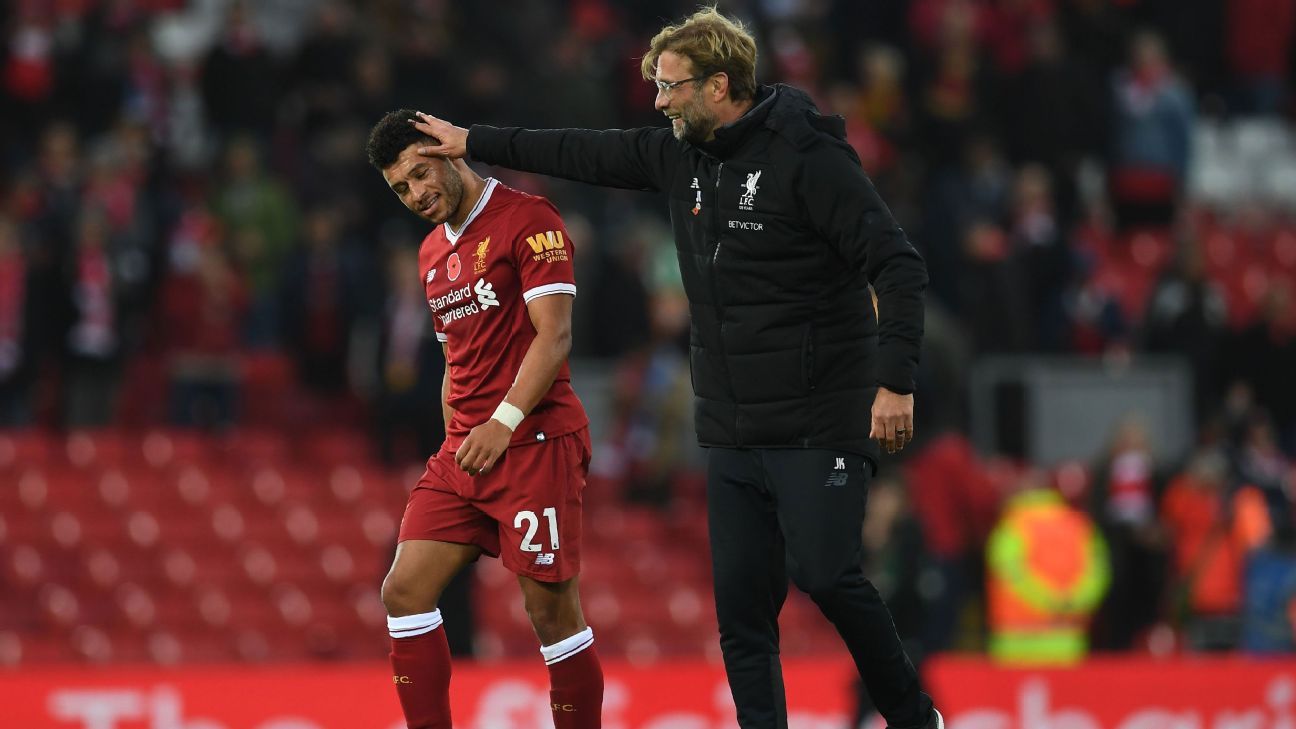 
Liverpool ran out easy 3-0 winners against Huddersfield Town on Saturday, though during the first half it had begun to look like hard work.

Dejan Lovren’s absence wasn’t really a surprise; he was originally selected but pulled something during the warm-up. Cruel jokes soon arose that he’d been substituted before he could do his usual damage… Liverpool taking “Safety First” a little too far.

Even that wasn’t the biggest surprise. With Sadio Mane, Philippe Coutinho and Adam Lallana injured and Emre Can rested, summer signing Alex Oxlade-Chamberlain was left on the bench. It begged the question: how many players need to drop before the former Arsenal man gets a start?

It made a curious £35 million transfer even more bizarre. Despite victory against Manchester United, Huddersfield are bound to feature in this season’s relegation battle and they clung to 0-0 by half-time at Anfield because the home side were nervous and inept, while Mohammed Salah fluffed his penalty.

Despite all that, Liverpool netted three times in the second half and Oxlade-Chamberlain merely added to his substitute appearances, once again when the game was already well won.

He has come on earlier, for the 4-1 defeat at Tottenham, yet was thrown into a maelstrom as Lovren was hauled off and Jurgen Klopp tried to instigate various desperate positional changes. It was hardly the setting for a player to show his capabilities — though was at least marginally better than his debut, appearing at Manchester City when Liverpool were down to 10 men and already well beaten.

Perhaps Klopp is to be admired here. He may feel Oxlade-Chamberlain needs to acclimatise fully to a new environment and his large transfer fee doesn’t give him the right to walk into a team that was doing well at the time.

The coincidental decline in Liverpool’s fortunes since his arrival then made it harder to select him in case he started struggling like everybody else so early in his new career.

When Liverpool were soundly beating Maribor on the way to a 7-0 win, Oxlade-Chamberlain came on, looked lively and scored his first Reds goal. That was obviously the preferred plan from day one but circumstances change.

This, however, is the way Liverpool often bring through players from their academy, which has at last started to produce some real talent. The latest to make headlines is Rhian Brewster, one of England’s biggest stars in a successful Under-17 World Cup campaign.

This was also the week when everybody else featured in the Carabao Cup. Klopp always used the midweek competition to rest stars and “blood” youngsters, leading to an early breakthrough for Ben Woodburn; Harry Wilson still awaits his.

But after a swift exit against Leicester, Liverpool have fewer of these opportunities to give young players a taste of the big time. Summer signing Dominic Solanke has had 10 minutes here and there but nothing where he could effectively show what he’s got.

Some will point to Trent Alexander-Arnold and Joe Gomez as proof Klopp still has youth on his mind but most would say that’s a consequence of Nathanial Clyne’s long-term injury and the paucity of defenders to begin with.

One or two of these youngsters were originally at Chelsea. They’re now at Liverpool because they felt that might give them a better shot at first-team football, but so far that doesn’t appear to be the case. As Oxlade-Chamberlain takes the obligatory late substitutions to try and impress it seems unlikely to change.

Klopp must focus solely on results after an average start to the season, and the Champions League is too important to take any risks with selection. Rotation is so far proving difficult. Keeping a balance between getting the result, ensuring players are rested and also making some of them feel they’re an integral part of the squad.

The Oxlade-Chamberlain situation keeps drawing attention to the fee and unfixed problems at the back. Ragnar Klavan did okay on Saturday but the visitors presented no real threat and harder challenges are bound to bring complications to the surface again.

A manager can stand or fall by how expertly he shuffles his pack and also gives chances to his academy players. Liverpool can be proud of an extremely fruitful period in the 1990s when they discovered the likes of Robbie Fowler, Michael Owen and Steven Gerrard — highly skilful, game-changing superstars.

It was perhaps fortunate for those players that they were given their early chances because the team wasn’t particularly good at the time. It certainly wasn’t challenging for the title when they eventually became regulars.

Klopp will stand or fall by what he does with his main stars but he has until now shown willingness to give anyone a chance to show what they can do. Maybe injuries and workload just left him with no choice before?

There are a wearying 13 games between Nov. 18 and Jan. 1; that may be when Woodburn, Solanke, etc get their chance after all. Even Oxlade-Chamberlain may be starting by then…