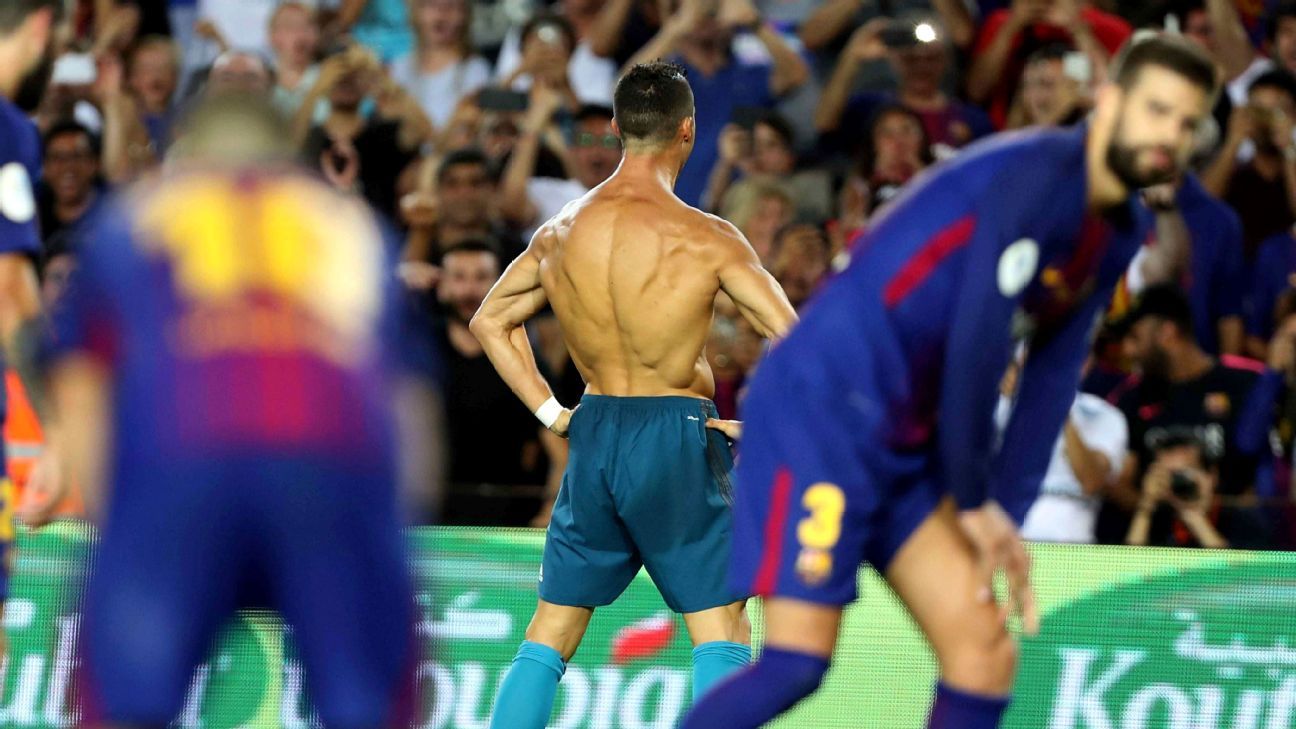 
The controversial, remarkable and admirable events which lit up Real Madrid’s 3-1 Spanish Super Cup victory over Barcelona on Sunday stand a good chance of diverting focus away from fundamental and pretty startling elements of a match which started like a tepid friendly and finished like the Hunger Games.

Of course the eye is drawn to the absolutely fabulous goals, first from Cristiano Ronaldo and then Marco Asensio, that sealed one of the most comprehensive and merited wins Los Blancos have registered at enemy HQ in a long time. The quality of the finishes, the nerve, the athleticism and the precision — you’d enshrine both goals in the Louvre if it were possible.

Then there was the conveyer belt of jet-black comedy.

Gerard Pique’s attempt at a “Hand of God” goal, his own-goal, the fact that Barcelona’s penalty stemmed from a clear piece of streetwise gamesmanship by Luis Suarez and then the icing on the cake — the otherwise excellent referee’s decision that Ronaldo dived when Samuel Umtiti’s foul was crystal clear.

Some of the bar-room chat will focus on Isco’s excellence. Some of it, as was the case last night among Catalan journalists, will alight on the (healthy, I think) fact that because thousands of Barca socios were on the traditional Mediterranean August month-long holiday, their tickets had been sold on the open market and the Camp Nou had more Madrid fans dotted in every part of the grand old stadium than I’ve ever seen.

Personally, I loved seeing Madrid shirts all around the Camp Nou, seated with friends, family or strangers in Barca kit. The hermetically sealed atmosphere in run-of-the-mill Clasicos, where 99.9 percent of fans at the Bernabeu are for Madrid and 99.9 percent of the fans at the Camp Nou are Blaugrana, is one of La Liga’s Achilles’ heels.

Anyway, savour all of the above excellence and idiosyncrasy. Dwell on it, if you will.

The Clasico isn’t supposed only to be about pure tactics, about cold strategy and laboratory-style dissection of the play-by-play action.

No. This is a steaming-hot, throbbing, passionate, error-filled, eccentric vendetta where the sublime technique on show is matched by a cauldron of testosterone and tempestuous brain freezes.

So don’t think, for a moment, that this witness didn’t savour the colour, pizzazz and controversy which was threaded through Madrid’s fabulous win. I did.

However should you want to look a little bit more closely there are significant things to say.

First, given that they were the home side, that they’ve beaten Madrid in each of their last two meetings and that they’ve scored six times in the process, let’s begin with Barcelona.

Not because they were beaten, but because of a bunch of other factors.

If you could use some sort of Hollywood-style reverse green-screen technique and watch the whole 93 minutes with just the Barcelona players on screen, and Madrid stripped out of the picture altogether, then you’d have judged by their lackadaisical passing, their jogging instead of sprinting, their semolina-pudding thinking and their utterly horrendous positional play, that they were facing a third division side in a Copa del Rey fixture with a six-goal advantage from the first leg.

They were listless, lacking in edge or motivation, sloppy and — worst of all — they didn’t learn or improve as the game went on.

In this point I want to be clear that I’m specifically not underestimating the Madrid performance. In terms of strategy, the Spanish champions’ early pressing of Barcelona, both the high press and then the more random pressing across the pitch when the home team broke through the first line of pressure, was very good for the first half. With that stifling of Ernesto Valverde’s team, plus the tireless work which Mateo Kovavic put in to shadow Lionel Messi and curtail the damage he can do, Madrid sucked the confidence and life out of their Catalan rivals.

That said, I go back to my original point.

Barcelona’s energy, attitude, intelligence and basic pugnaciousness all merited a D-minus if this were a report card.

It’ll take time, until we get to hear players talking on (and, more importantly, off) the record and to get detailed explanations from Valverde, to understand how it was that Barcelona continued to make clear-cut and fundamental positional mistakes right throughout the game.

Time and again the two centre-backs, Umtiti and Pique, were left horribly exposed and either two-vs.-two or, worse, two-vs.-three as Madrid broke.

Time and again Aleix Vidal was either tucked in far too close to the centre-halves so that Marcelo was open down that touchline or he was slow to get to block the Brazilian’s runs and crosses.

Watch Vidal trotting back for Ronaldo’s wonderful goal. As Pique has kept pace with his old Manchester United teammate, it’s when Ronaldo cuts inside and shapes to shoot that Vidal’s old-man-on-a-treadmill effort shows up. He’s jogged back but without the effort, attitude or pace which would have prevented Ronaldo cutting in for his shot.

Yet Barcelona’s general manager, Pep Segura, pinpointed Pique’s own goal as the moment which changed the match. Yeah, right. Let’s call you Pep the Lesser, or Pep the … who?

Luis Suarez giving the ball away needlessly, Ivan Rakitic not shooting when a pass is put in his stride and then being robbed — these led to Madrid fizzing up the other end of the pitch to damage the home side. And they were emblematic of the entire night.

Then there was Gerard Deulofeu.

It’s not just his performance in this match, it’s that he’s not learned, not matured in his tactical or football intelligence in all the years he’s been away from the Camp Nou.

How the winger played underlined specifically what has always been his downfall: He slows the play down. His first thought is always how to trick or turn, not what the team or the moment needs. His vision is blinkered, not peripheral.

I hate, truly hate to be negative about the prospects of a decent guy who’s been born with talent. But not only was it crystal clear before he was bought that this was a retrograde step, now the jury, in the form of Messi and Suarez, has quickly decided. Either they didn’t feed him the ball when the opportunity came, patently not confident about what would happen next, or Suarez berated him for not passing to him with enough alacrity.

The body language was dyslexic. That they were going to miss Neymar was obvious. That they’re unimpressed with the returning prodigal son is equally so.

All that being said, the winners deserve to have appreciation lavished on them.

Madrid had a plan. Several of them.

The general work ethic was super, and Zinedine Zidane’s idea to hustle the guts out of Barcelona and then throw on Ronaldo, Asensio and Lucas Vazquez (don’t discard the tailor-made tape-measure pass he slid through to Asensio for the third goal) hit the jackpot.

The high press I’ve already mentioned, but I’m going to go back to what I always used to say when Pep Guardiola’s Barca had this art down to a tee: It’s not just an athletic, stamina-based resource. The players must believe in one another, the plan must be tutored, drilled and embraced in training each day. Pressing is a state of mind, and I like the state of Madrid’s mind.

Keylor Navas produced saves when needed, Raphael Varane dominated in the air. Isco, for the second cup final in four days, was the man of the match — intelligent, inspirational, tireless, a resource in terms of winning the ball back and an even better resource in terms of what to do with it. Toni Kroos was ice-calm, Gareth Bale had his moments and Marcelo made Vidal look either naive or terrifically sloppy.

Perhaps the biggest thing which stood out, beyond the controversy, the stupendous goals and the pallid display by Barcelona, was the truism that winning becomes a habit.

This was a Madrid side, indeed a squad, which has grown used to winning, has grown addicted to it in fact and which is willing to feel the burn.

Willing to work harder day by day, willing to outwork and out-hunt rivals. They have solutions, they have confidence and, right now, they project a “come and have a go if you think you’re hard enough” attitude which most teams, especially this version of FC Barcelona, don’t fancy and can’t cope with.

Boy, did they merit this big, big win.