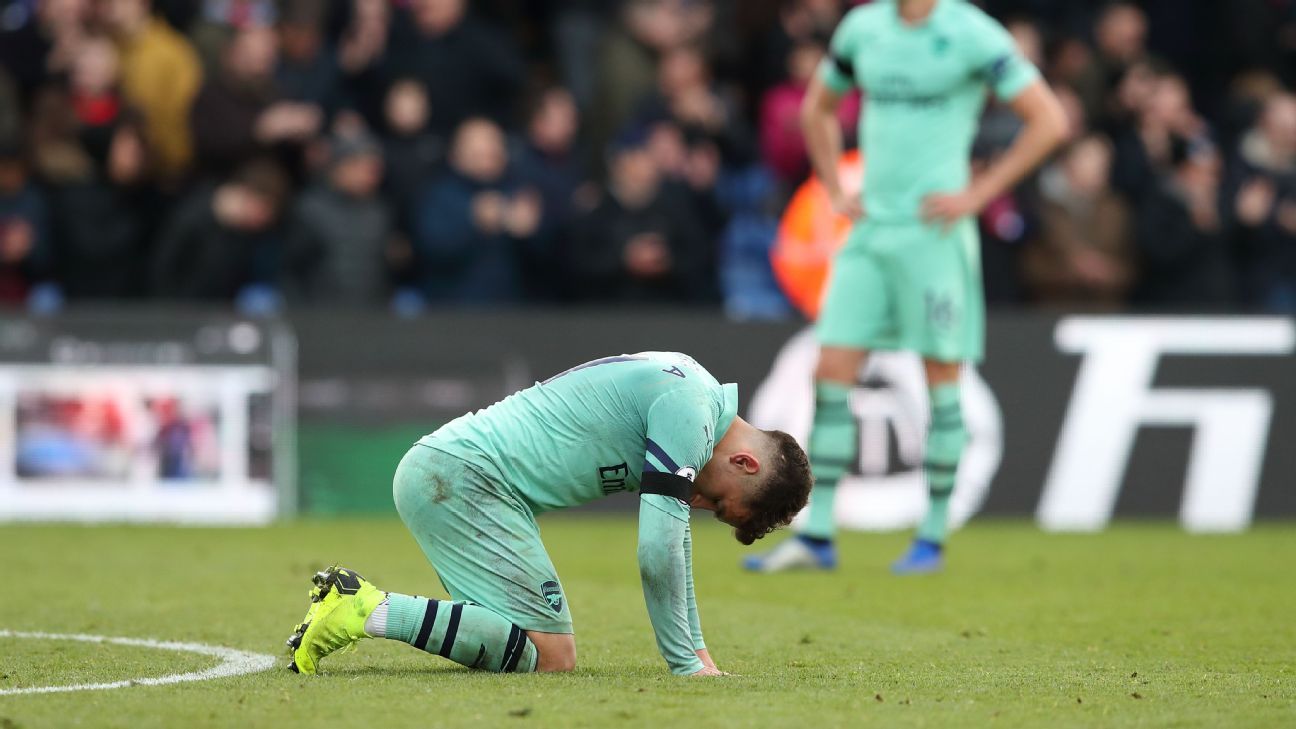 Milivojevic leveled in the 83rd minute after Granit Xhaka was adjudged to have fouled Wilfried Zaha in the box.

The Serbia international had put the hosts ahead just before the half-time break, but Arsenal came back through a stunning free kick by Xhaka and an tap-in by Pierre-Emerick Aubameyang.

Arsenal got away with a clear handball by Alexandre Lacazette in the lead-up to the second goal, though, and a point for Palace felt deserved overall based on the number of chances.

This was one of Arsenal’s least impressive performances in the last two months but there were a couple of bright spots. True to their habit, they found a way to conjure up goals in the second half despite not having created much up to that point. Lucas Torreira also had another strong game in midfield, while Bernd Leno hardly put a foot wrong in goal.

Unlike Arsenal’s recent opponents, Palace managed to expose the Gunners’ defensive flaws in this game. Both penalties were the result of poor defending, with Shkodran Mustafi offering up another reminder that he’s much too mistake-prone. It was a disappointing display going forward as well, with both goals coming from set pieces as the Gunners’ high-powered attack couldn’t get anything going.

6 — Whatever Unai Emery says at half-time to his players, it continues to work, as the Gunners quickly overturned a deficit after the break. But his substitutions aimed at securing the game after going ahead backfired, as Arsenal didn’t have enough firepower to find a late winner after Mesut Ozil and Aubameyang were both taken off. It remains a bit concerning that he still can’t get the team playing well in the first half.

GK Bernd Leno, 7 — No standout saves but a good “sweeper keeper” performance from the German, who also looks very reliable in the air. Fit-again Petr Cech has a fight on his hands to regain the No. 1 spot.

DF Hector Bellerin, 6 — Struggled to cope with Zaha at times and had to come off at half-time after picking up a knock. Missed a great chance to put Arsenal ahead.

DF Rob Holding, 7 — Another solid display by the centre-back, who is growing up quickly this season. Argued that he was fouled in the lead-up to Palace’s penalty, and his ripped shirt was evidence that he was.

DF Shkodran Mustafi, 5 — Reckless challenge to give away the first penalty, which ruined what had otherwise been a decent display. Not the first time a big mistake from the German has cost Arsenal.

DF Granit Xhaka, 7 — Fantastic free kick for the equalizer but allowed Zaha to take advantage of his flat-footedness to earn the second penalty. Otherwise filled in well at left-back again and was rarely troubled by Andros Townsend. It’s hard to understand why Roy Hodgson didn’t move Zaha over to the right wing earlier to exploit Xhaka’s lack of pace and unfamiliarity with the let-back role.

MF Matteo Guendouzi, 6 — Started next to Torreira for the first time but still did his share of defensive duties, with several vital blocks and interceptions. Brings more mobility to the midfield than Xhaka but didn’t show enough creative flair.

MF Lucas Torreira, 7 — Constantly harassing the Palace attackers, buzzing around the ball carrier like an annoying fly. Always one of Arsenal’s most important players these days.

MF Alex Iwobi, 6 — One of Arsenal’s most ambitious players with the ball going forward, but lacked an end product once again.

MF Mesut Ozil, 5 — Couldn’t get much going in this game and was clearly unhappy about being taken off in the 68th minute, throwing his mittens on the ground. A far cry from his stand-out performance against Leicester in the previous league game.

FW Pierre-Emerick Aubameyang, 6 — Showed his poacher’s instincts by popping up to score Arsenal’s second goal but otherwise had a rather quiet day.

FW Alexandre Lacazette, 5 — Didn’t have many chances to score and got away with a clear handball on the second goal. That said, put in a good shift and combined well with the midfielders as a target man.

DF Stephan Lichtsteiner, 7 — Came on for Bellerin after the break and showed his experience to deny Zaha a chance early on. Also showed his age by having to hack down Zaha for a booking.

FW Danny Welbeck, 5 — Was presumably brought on to add more of a defensive work rate than Ozil, but didn’t accomplish much.

MF Aaron Ramsey, N/R – Only a substitute again and couldn’t help Arsenal kill off the game.