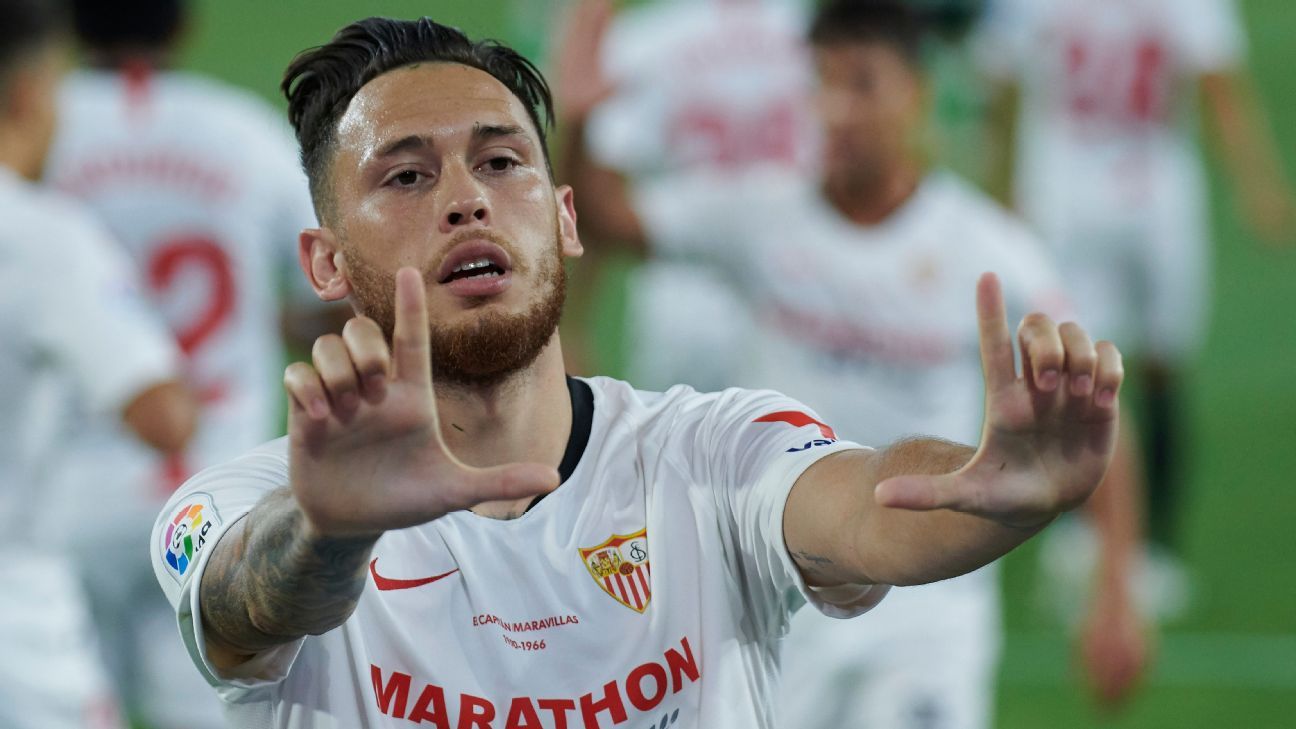 
There was no doubt about the star of the show when La Liga returned with the Seville derby on Thursday. Lucas Ocampos tipped the balance for Sevilla, striking the crossbar, scoring from a penalty and then setting up Fernando for the home side’s other goal in their 2-0 win over Real Betis.

The game was a triumph for Ocampos who, despite the interruption, is enjoying a glory season. He was a solid performer during his seven years in France, split between Monaco and Marseille. But the 2016-17 season left a question mark hanging. He spent the campaign in Italy, with both Genoa and Milan, and made little impression. Could he step up in a stronger championship than Ligue 1? The answer would seem to be an emphatic yes. He now has 14 goals in 31 matches for Sevilla, and made a splendid entrance to the Argentina team late last year, coming off the bench to snatch a draw away to Germany, scoring again against Ecuador and impressing in a win over Brazil. Approaching his 26th birthday, Ocampos is now a well-established, top-class player with a consolidated career.

Ocampos is something of a pioneer. At the turn of the century, it was common for South American players to head to Europe when they were in their early to mid-20s. More recently, the Europeans have been buying younger. The advantages are clear; the transfer fee is lower, and there is the chance of making a profit from selling the player on. The younger the player moves, goes the theory, the easier it is for him to adapt to the quicker, more compact style of play of elite European football. Ocampos was an early example of the trend. He had done well for River Plate in the 2011-12 season, which they spent in Argentina’s second division. And when he reached 18 (the age at which players are allowed to move to Europe), he was packing his bags and moving to Monaco.

With the benefit of hindsight, it proved a good move for the club and the player. He has filled out physically — the skinny kid now boasts an imposing frame — and made huge strides in technique, confidence and experience. But the early move was not without its risks. From a footballing point of view, it might make sense to make the move at 18. But that may not apply from the perspective of the human being. Teenage footballers are often not particularly mature for their age — a focus on the game may have limited their life experiences. It is an age when they are going through changes. For some, experiencing this process so far from home may be a change too many.

And there is also the footballing risk. The youngster might have been getting a regular game back home. Suddenly he is part of a deep squad, full of international stars. His place in the pecking order is near the bottom. And if the club have not spent much on him, they can afford for him to fail. He may lose motivation and sharpness. This is all the more true if he has been loaned out to a smaller club, which has no stake in his long-term development. Back in South America he was the coming wave. In Europe, starved of opportunities, he can feel surplus to requirements.

The return of the major European leagues is excellent news for this type of player. So many new factors are now in his favour; the matches will be coming thick and fast, summer temperatures will make them more draining, established players might be short of full fitness and prone to muscular injuries, and five substitutions can be made during the game.

Players who just a few months ago might have been off the radar might now have some chances to rush on to the stage. Take Inter Milan’s teenage striker Martin Satriano. The Uruguayan came over at the start of the year from Nacional to play in the under-19 side. With a combination of physical presence and technique, the early impressions were positive. He has now been training with the senior squad. Coach Antonio Conte is famous for working his players hard. A match every three days in intense summer heat will take its toll on the usual first-teamers. Someone like Satriano might be handed a chance that in normal circumstances may only have come two years later.

Satriano is merely one example. There will be many more. The return of the European leagues opens up a fast track for those who are following a trail blazed by Ocampos.