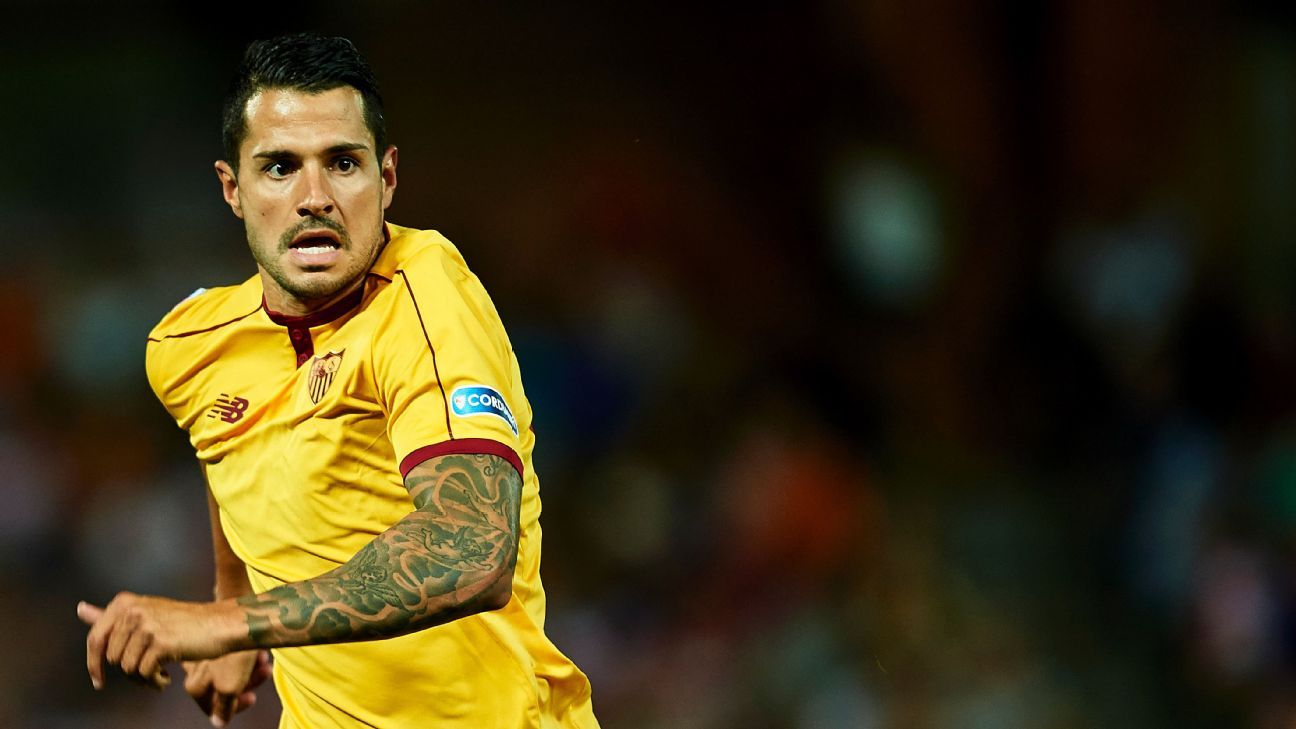 
Sevilla president Jose Castro says his club are considering taking legal action after Vitolo went back on his word and joined Atletico Madrid in a complex arrangement that will see him spend the next six months on loan at Las Palmas.

Atletico had been tracking Vitolo, 27, all summer despite being under a FIFA transfer ban, but only earlier this week Castro said the player had agreed a new long-term contract and was staying with Sevilla.

However, the Spain international then changed his mind and visited the La Liga offices on Wednesday to trigger his €37.5 million release clause, with Atletico announcing he had signed for them until 2022, and Las Palmas confirming they were taking him on loan until January.

Castro told SFC radio that he had a duty to “defend the interests” of his club and they would now consider what steps to take next, with reports in Spain saying they may try to enforce the €50m release clause contained in the new contract agreed verbally last week.

“The club will exercise its rights, will study the documents within its power and will take all the actions in its hand to defend itself,” Castro said. “Sevilla reached an agreement with his agents, the document was not signed but the conditions were approved. We will defend our interests as far as is necessary, the board will decide how far we go.”

Castro said that he felt he had been used by Vitolo — who has developed into a Spain international having joined Sevilla from Las Palmas for just €3m in 2013 — to leverage a more lucrative contract from Atletico, where he will reportedly earn €8m a year after tax.

“[Vitolo] has used Sevilla to get Atletico to pay him more money,” he said. “He has left us badly after making an agreement but not keeping his word. The club made an enormous effort and Vitolo has shown disrespect for Sevilla and its fans. He asked us to resolve a problem, and then created another for us.”

Castro said there were no regrets over announcing on Monday that Vitolo had committed his future to Sevilla.

“I do not regret announcing the renovation,” he said. “During the weekend I had different calls from Vitolo asking me to please fix the problem, that we would accept that Atletico will pay the clause in instalments.

“I told him that was impossible, as it was a lack of respect. In the end we reached the possibility of paying close to what Atletico were paying, and the case was resolved. He was left clearly happy and asked me to defend him with the fans.

“Monday morning we prepared all the documents, and his father gave the OK. It just lacked the player’s signature, and Vitolo told me we could announce it. That is why we went public and I don’t regret it. If you cannot trust in the word of a player, there is nothing more you can do. I am not angry, but indignant.”

Castro did admit to being upset with both Atletico and Las Palmas over how things had played out.

“We are indignant about it all,” he said. “There has been a public market, when the player had three years left on his contract. We are upset with the attitude of third parties too. This damages the relationship with those clubs as they have moved for a player who was ours.”

Vitolo himself was unrepentant on his arrival in his hometown of Las Palmas.

“These have been very tough days, but in the end we have decided to stay here, so I am very happy with that,” he said. “I am looking forward to playing for my home team in the Primera [Division].”

Del Nido Carrasco currently controls the shares in the club formerly owned by his father Jose Maria Del Nido, who was jailed in 2014 after being found guilty of the misappropriation of public funds.