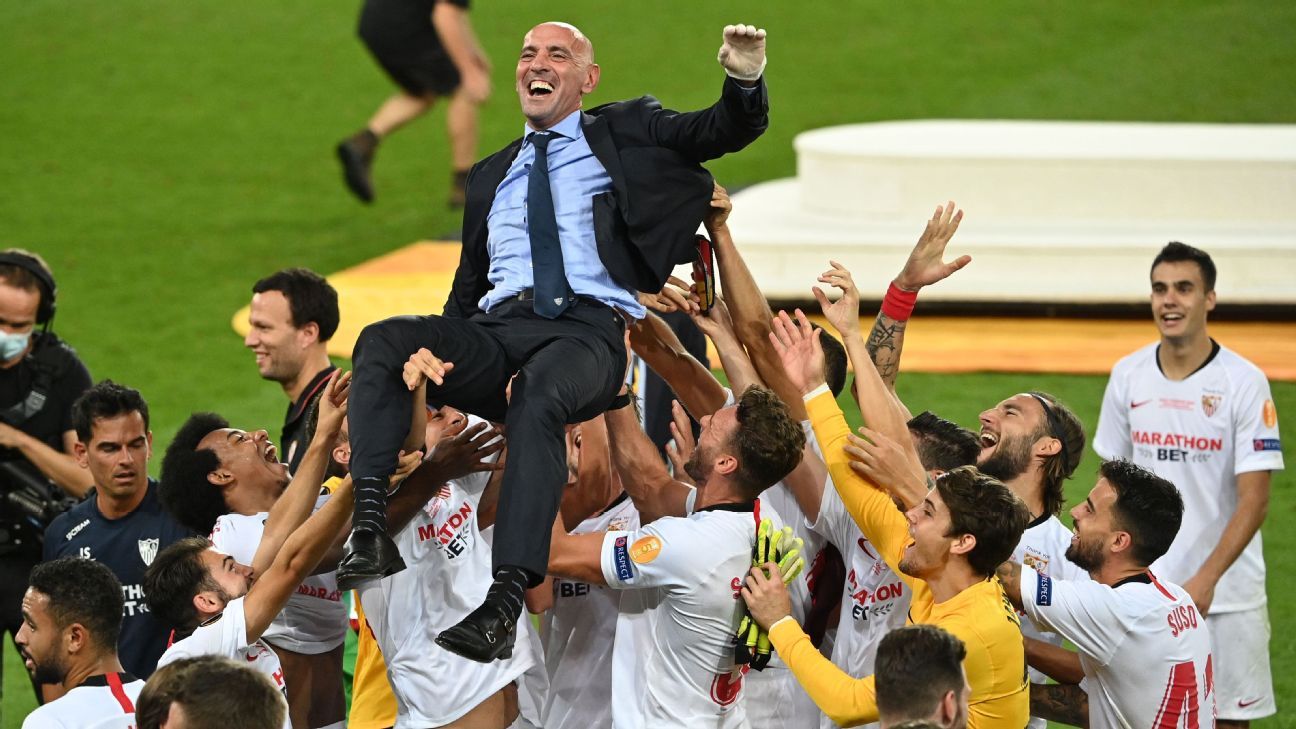 
It’s possible that you don’t immediately know who Ramon Rodríguez Verdejo is, and you certainly won’t know what his annual salary plus bonuses is. But if you’ve even spent an instant in thrall to Sevilla’s building of a trophy empire over the past 16 years, you’ll know that the bold Ramon is universally known as Monchi — and you, like me, will suspect that his salary should be in the region of €10m per year. (Spoiler: it’s not.)

There’s no argument that better teams than this, or any version of Monchi’s Sevilla over his near 21 years as Sporting Director, have been constructed, but I don’t think that there’s any competition for him to be named the best “Team Builder” in modern football history, perhaps ever. (Yes, fans of Brian Clough, Bob Paisley and the Alex Ferguson of his Aberdeen era: I hear you.)

The reason is that even if you pitch him pound for pound against the great academy-bred teams — Celtic of 1967, Ajax through the high-spots of their remarkable history, Barcelona under Pep Guardiola, Manchester United under Ferguson or the lavish buyers like AC Milan in the 1980’s and 1990’s, Real Madrid in each of their two “Galactico” eras (1955-62/2000-19) or PSG right now — Sevilla easily stand comparison.

Why? Because Monchi’s Sevilla are not only ultra-successful, record-breaking and on a continuous upward trajectory under Monchi, but they remain a selling club. They’re a selling club for whom the “right price” will always be accepted, even if a rival club wants one of their star footballers. Always. (Which is not to say, of course, that the “right” price might not be huge.) Nevertheless, Sevilla are a selling club that have consistently been the world’s best at scouting, assessing and buying, then improving, players that other clubs haven’t spotted, don’t rate or won’t take a risk on.

Monchi is the brains behind that process. Before he took over, Sevilla hadn’t won a major trophy since 1948. Following his plans, they have 10, and their Europa League exploits — six titles since 2006, including three straight from 2013-16 — have been registered in the Guinness Book of Records. It’s a system, it involves (currently) 12 other full-time staff (and many hundreds of sometimes voluntary staff) around the globe) and it’s a process that’s constantly being updated to harness new technology. But it’s unquestionably Monchi’s system.

He, and his methodology, have become so stunningly great at identifying talent that’s not only undervalued, but perhaps even ignored, along with those players on the verge of becoming hugely in demand, that if he could transfer exactly his skills to professional gambling or playing the stock market, it would earn him many hundreds of millions. Billions, even. That’s how good he is. If you want to reach for comparisons, then think Tiger Woods, Michael Jordan, Cristiano Ronaldo — the guys who are talented, yet are relentlessly searching within themselves, and all around them, for ways not only to maintain greatness, but to improve on it.

Monchi was the goalkeeper, in floods of tears, when Sevilla were relegated to Spain‘s second division, back in 2000. The club’s President, stripped of top-division status, finances and other ideas, asked this relatively run-of-the-mill 32-year-old keeper (“I was fair,” he tells me) to take over the sports management of the entire club, youth academy, squad development, outgoing transfers and even coach selection.

Monchi, frankly, didn’t have the first clue what he was doing. I know this, because he told me! But from a first palpable success — signing Javi Navarro for free (from direct rival Valencia) in 2000-01 and watching the fearsome central defender become captain, play nearly 200 times for Los Rojiblancos and lift five major trophies — until today, Monchi has become the single most important, successful and relentless figure in the entire 131-year history of Sevilla.

His “Hit Parade” of successes is long and full of major stars — from Dani Alves through Sergio Ramos, Jose Antonio Reyes to Jules Kounde and Youssef En Nesyri — all either spotted, polished up and sold for vast profits after bringing success, or helping make Sevilla competitive at the top of La Liga and threaten the upper echelons of the Champions League. But one reason that Monchi’s success is so jaw-dropping is that he feeds in a pond where other big-beasts hungrily want to nourish themselves and have bigger teeth.

It’s not in the elite market, where big money and the prospect of Champions League trophies are a club’s No.1 calling card, but the global market, where you have to be the sharpest, the quickest, the surest, the most daring and the smartest. Where you have to research, consult, draw breath, trust your scouts and colleagues… and then risk millions.

Porto and Benfica are clubs that deserve far greater appreciation for their scouring of both Europe and South America for unpolished diamonds, nurturing them and then, after trophy-winning seasons, selling on at eye-watering mark-ups. Liverpool too, in recent years, have been stellar in terms of sales and recruitment. Lyon can make a similar boast, and Ajax too. But if there’s one club that might match Sevilla for their modern history of brilliant transfer business, conducted while fighting off domestic and European rivals with superior resources, it’s probably Borussia Dortmund. Which is handy given that, this week, the two clubs face each other competitively for only the second time.

(It’s worth noting that the last time these two transfer-market behemoths went head to head, it was the Sevilla of Gregorio Manzano, starring Konko, Dabo and Alexis (remember any of them?) that eliminated Jurgen Klopp’s Dortmund of Mats Hummels, Mario Gotze, Shinji Kakawa and Robert Lewandowski. Monchi 1, Dortmund 0. How do you like them apples?)

Many things separate Dortmund and Sevilla: the red and whites are regarded as “Pijo” (“posh”) in their city, while their Bundesliga counterparts are proudly blue-collar. Geographically, it’s a dramatic clash of north vs. south, but their respective fanbases share an almost manic, irrepressibly loyal and demanding adoration of the team — among the most vocal and impressive anywhere in the world. And just as Sevilla have the mighty Monchi, so Dortmund can boast the marvellous Michael Zorc.

Like Sevilla’s guru, Zorc’s original football nous came from the pitch, not the classroom or the boardroom. A stalwart midfielder, veteran of Dortmund’s only Champions League win (1998 v Juventus) Zorc’s been guiding Die Schwarzgelben through boom and bust for about a year longer than Monchi has been Sevilla’s spiritual leader.

About Zorc, whose greatest hits would include recruiting Klopp, buying and selling Pierre-Emerick Aubameyang, Robert Lewandowski, Mats Hummels, Mario Götze, Ilkay Gundogan, Christian Pulisic and being the first to uncork Erling Haaland‘s thunderous goal-potential, plus showing faith in Jadon Sancho and Jude Bellingham, Monchi says: “He’s one of my role models, one of the best sporting directors in the world. The work Zorc and his scouting department do in the market is sensational.

“Dortmund is a team we know well enough: I really admire the individual quality in their squad. They are the only team to have competed with Bayern in Germany in recent years, that speaks volumes of their level. “We will be able to compete with them, but it will not be an easy match.” Nor will it.

Haaland pointed out recently that “if we play as we have done [of late], we’ve no chance against Sevilla.”

Yes, well, we’ve all heard that one before and nobody in southern Spain, least of all Monchi, will be paying a blind bit of notice to that verbal camouflage. What helps to suggest that Sevilla can repeat their aggregate 3-2 victory of 2011 is the fact that since he returned from a fiery sojourn with Roma, Monchi is producing some of his best work ever.

The briefest possible explanation of the “Monchi Method” is that in the first half of the season, he and his team will view (in person and on video) up to 3,000 players. They’ll grade them from A-E (A meaning full attention/sign at once, E meaning discard). Each player they’re treating seriously will generate up to 30 reports so that by mid-winter, they’ll have many thousands of detailed player files, filtered out by Monchi, who only dedicates himself to the A and B footballers that his system and staff have prioritised.

Then, Monchi will chat to his coach, who’ll almost never say “I want this player” rather express a desire for a left-footed right-winger, a penalty-box striker, a tall, aerially gifted centre-forward, an attacking, ball-playing midfielder or a defensively-oriented pivote: you get the idea. Monchi and his acolytes will put names and extensive research about those names towards the coach’s desires and then start to examine the price, the “gettability” and the character of the guys in question.

One very firm principle is that there must be at least a 70/30 balance in any prospective signing. Seventy percent ready to deliver, 30 percent of growth potential. That’s the minimum. Occasionally a “known” quantity like Alejandro “Papu” Gomez or Fernando will be signed with a 95/5 ratio — proven streetwise characters whose instant readiness and impact mean that the requirement for development or sell-on can be almost forsaken.

And so, one of the reasons that Sevilla can look at the Dortmund tie competitively is that a couple of Monchi’s 70/30 signings are performing at 90/10 levels already.

For example, Jules Kounde, the young, effervescent French centre-back whom Manchester City energetically tried to sign last summer and whose €90m buyout clause, just 19 months into his time at Sevilla, looks to be on the low side. There’s also Youssef En Nesyri: raw when signed from Leganes just a year ago, he’s now been flirting with Pichichi status — meaning that he’s intermittently topped a La Liga scoring chart ahead of Leo Messi, Karim Benzema and Luis Suarez — and has scored two hat-tricks in 2021. West Ham came in for him during the winter market — another indication that a player bought with the expectation of possibly hitting his full potential over the next two seasons is about a year-and-a-half ahead of schedule.

Julen Lopetegui has a muscular squad, Sevilla are hard to beat, and there’s a reasonable chance that they proceed to the last eight of the Champions League — rarified air they’ve only breathed in 1958 and 2018. But both Monchi, and his direct rival, Zorc, are proof to all clubs, whether big, medium and small, that if you employ the right person, if they work prodigiously hard, if their system and staff are top-rate, the transfer market can be your friend and a trampoline towards both major honours, competing with clubs of vastly bigger budgets, and to the gargantuan financial well-being that progression in the Champions League now brings.

All hail the squad builders.