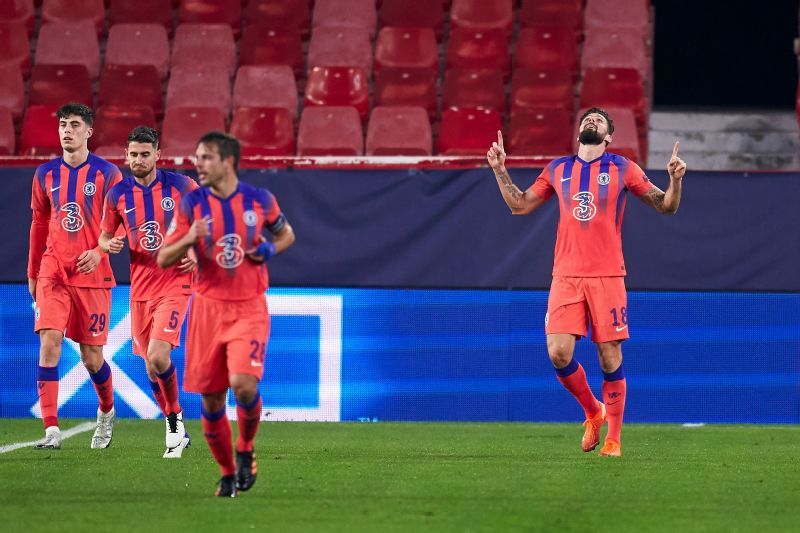 Christian Pulisic was back in the XI for Frank Lampard, following his first appearance as a substitute in a 0-0 Premier League draw with Tottenham Hotspur since returning from an injury layoff.

Kai Havertz teed up Giroud for an early Chelsea strike with the France forward curling a left-footed shot past Alfonso Pastor as he was falling away from the goal.

Chances were hard to come by for both teams throughout the remainder of the first half as Chelsea took their 1-0 lead into the dressing room.

Giroud doubled his tally and Chelsea’s lead nine minutes into the second half, chipping the ball over Pastor after being played in by Mateo Kovacic.

A glancing header from a N’Golo Kante cross gave Giroud his third of the match to give Chelsea some breathing room as they saw out their group-topping win with one match left to play.

Giroud scored his fourth from the penalty spot, sending Pastor the wrong way after Sergio Gomez had taken him down in the area as the two ran onto a whipped in cross.

The stellar night for Giroud made him the oldest player in Champions League history to score a hat trick, and the oldest to do it in the European Cup since Real Madrid’s Ferenc Puskas in September of 1965.

The result left Chelsea with 13 points from five games, three ahead of second-placed Sevilla with a better head-to-head record against the Spanish side after their 0-0 draw at Stamford Bridge in the reverse fixture.