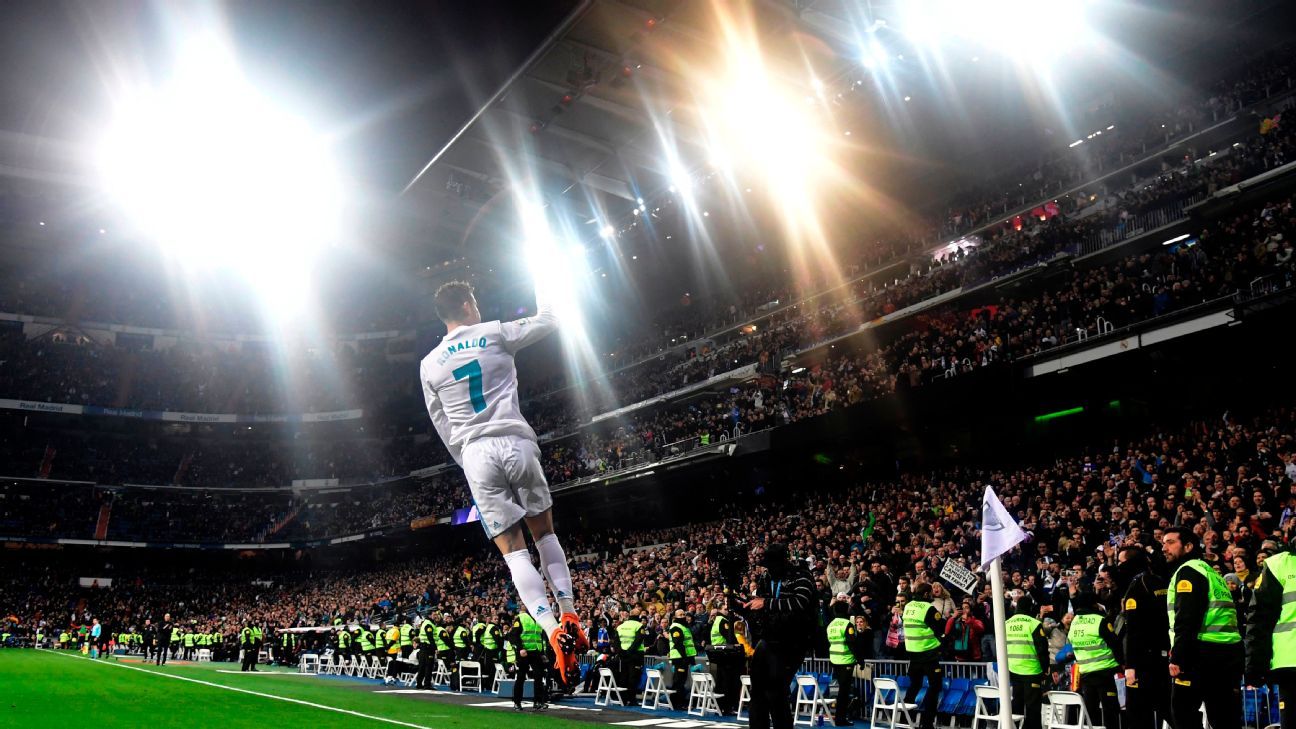 
This story on No. 14 athlete Cristiano Ronaldo appears in the 20th anniversary issue of ESPN The Magazine. Subscribe today!

1. Born in Madeira — I am an island. I was forged from a volcano. The lava bloomed me, then spread like a shield of earth, my first field. On this pitch of dirt and chalk, I played football until dark and learned to master the moon like a bauble, a toy, a ballon d’or. Year after year, always trying, to improve and improve, with more experience, with more objectives, with more desires.* Or was it a ball that I first shaped into the moon and with a flick of my ankle set it into the deep blue upright of night, millions of viewers all over the world.

2. Ascending, descending, my body is atomic. From my shoulder to my hip, I twist, I flex, silhouette of lightning — I am a number: 7. I am chemical, elemental– I am Nitrogen, which translates to “nothing.” Nothing but force. Nothing but pressure. Nothing but the back of the net. I am 78 percent of the earth’s atmosphere — I am everywhere, and many. Breathe me in. If I’m human, I am the lightest of them all, I’m a lamp and cover territory like a flame, speed like an Iberian wolf — my boots barely touch the ground. Beneath my feet every blade of grass lifts up in Spring and green-que te quiero verde! Alchemists call my sweat “aqua regia,” the King’s water, meaning I take gold. But my ambition ends up always wanting more, always wanting more. This is the way the galaxy was created. I felt like a star. A swirling. An attraction. My appetite is infinite. I am only not a god because I am a man.

3. I slash right, I slash left — each direction is the same: Energy. I try to fight with my weapons every day, every match, throughout my career, to be the best ever. I am a body of language, an ache to be remade electric. A symbol for desire, which is a symbol for conquer–Winning. That’s the most important to me. It’s as simple as that. I am man’s mythology, the story every other man must try to prove: “The astonishing Cristiano Ronaldo …” “Cristiano shoots … goooal!” “Cristiano Ronaldo, hat trick!” But even though I echo everywhere, I am alone, and lonely. Even a river must be careful not to die of thirst. If I didn’t feel the pain maybe I wouldn’t be as good as I am.

4. My leg is a geometry, my foot an equation. The ball is a divine proportion — Archimedes’ truncated icosahedron–this body is a golden ratio. My thigh is a glyph, the aleph, the first letter in the alphabet of momentum, the beginning of the universe. In my musculature is a cathedral and its worshippers — a tectonic architecture — adductor brevis, adductor longus, adductor magnus, adductor minimus. I touch each one, call them by name, exercise them, again, again. My body, my Apostle, bent in true supplication, and so they bless me kinetic. Football has always been my passion–the body my temple, my coliseum. In my hamstrings and glutes seven bells toll, and in my quadriceps seven trumpets bring down the walls of Jericho: Goooooooal! When I score, I open my mouth and the crowd roars from inside the stadium in my chest. “Portugal! Portugal! Hala Madrid!”

5. Jaw line, tight with shadow. Sculpted of light and dark. Michelangelo’s David revealed from a single piece of marble, made of stone, of the earth, of friction. Football is so fast and the things coming so fast–there are people who don’t think about the present. Present is the most important. Future is gonna come. The present is now. Do you think David stood still after he found the giant’s sweet spot? He pumped his fist, took off his shirt and slid across the battlefield on his knees. His eyes hooded like hawks, throat and neck glowing like ripples of silk, carved Adam’s apple. His veins almost pulsing, his hand throbbing against his flank–it is difficult to contain so much beauty. There are people who love me. There are people who hate me, who say that I’m arrogant, that I’m vain, or I’m this and that. That’s part of my success. I was made to be the best. I am the past and the future–contrapposto. Ever-motion. The chariot and the horse, the wheel and the whip, the hippodrome splayed out beneath me. This is not a war. This is football. Someone’s gonna win. Someone’s gonna lose. But there is always another giant to slay.

6. God gives you a chance and you say, Let’s go. When the day begins, I am new again … a new year, goals to score, trophies to win–that is the way I live my life. My body grinds and shifts like an earthquake, a magnificent trembling, and sudden release, thrust. Foot, hip, shin, sternum, thigh, forehead. I am haptic–my entire body is touch and strike. If I wasn’t already a wolf, I’d be a snake. No armor can hold me, no shirt can contain me. I am naked, bare-chested. I am the tool and its work–I am chiseled. I am baptized and made new in the air as it resists me. I sculpt the air itself. I plow molecules, explode them and find their corners. I make atoms blossom and open like gardens around me as I slice through them like sunlight. In this flowering I become the shape of myself, I reap what I’ve sown–I pick the fruit knowing I’m the one who makes it sweet.

7. Tell me who’s the best player in the world? Me.

*Comments in italics are taken from Cristiano Ronaldo’s dialogue in the documentary “Ronaldo.”

Natalie Diaz was born in the Fort Mojave Indian Village in Needles, California. She is the author of When My Brother Was an Aztec, a collection of poetry.