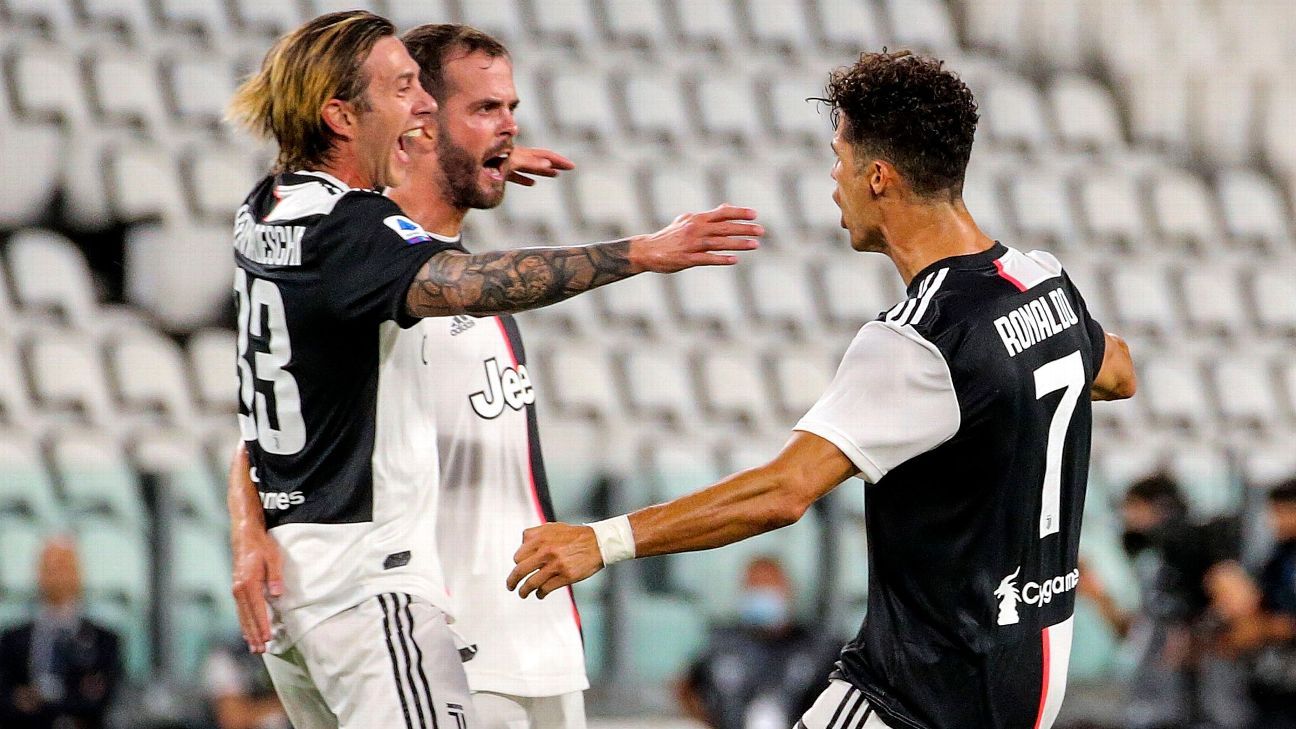 What changed after the restart?

The coronavirus stoppage was obviously the dominant storyline of the season as a whole, as every sport was brought to a halt in March and left to come up with its own plan for restarting down the line. When soccer came back throughout Europe, it was played in the heat of the summer and provided with a few rule changes — namely, an increase from three to five substitutes and the introduction of mid-half hydration breaks.

How did all of this change actually alter the product?

Comparing before-and-after stats from the four of Europe’s five biggest leagues that actually restarted — Ligue 1 canceled the rest of the season outright in March — we can pick up on a few trends.

Defensive pressure went down, and possessions therefore got longer

These four leagues (the English Premier League, Spanish La Liga, German Bundesliga and Italian Serie A) went from 96.3 possessions per 90 minutes to 91.0, and from 4.6 passes per possession to 5.0. Offenses attempted fewer risky passes — 34.0% passes were forward and 13.5% were quantified as long balls, compared to 35.3% and 13.5%, respectively, before stoppage — while defenses appeared to shift their aggression levels downward as well. Opta’s Passes Allowed Per Defensive Action measure (PPDA) is a solid measure of defensive aggression; teams in these leagues went from allowing 11.8 PPDA to 12.7, dispossessed opponents less (from 9.3 per 90 minutes to 8.4) and committed fewer hard fouls (from 2.3 yellow cards to 2.0), while the overall number of ground duels attempted shifted from 74.7 to 69.9.

So was this more passive play a sign of defensive fatigue or energy conservation? Poorer conditioning? Lack of crowds translating into lack of energy? Not necessarily. It seemed to stem mostly from whether or not a team had something to play for. Consider:

In the middle of a desperate (and eventually futile) fight for European qualification, La Liga’s Getafe went from an intense 9.2 PPDA to a sixth-gear 8.8. Leicester, trying to cling to Champions League qualification, went from 9.8 to 9.0. Werder Bremen, in an attempt to save itself from relegation, went from 13.9 to 11.7. Barcelona, watching its La Liga lead disappear, went from 9.8 to 8.9. Meanwhile, the Premier League’s Brighton, mostly safe from relegation but far from European contention, eased down into third gear, going from 10.3 PPDA to 16.5. Freiburg, in a similar position in the Bundesliga (though closer to Europe than Brighton), went from 14.8 to 18.6. Norwich City, hopeless in its futile fight against relegation, went from 13.0 to 16.9.

Who used their subs?

While the hydration breaks were often used as timeouts and opportunities for strategic or tactical shifts, the most talked-about post-stoppage rule change was the increase in substitutions. This remained a topic into this tiny offseason as leagues have debated keeping the rule in place.

There’s been pushback to the idea — it could easily reward teams with better depth, and since those teams are usually the richer clubs with all the money and talent advantages already, this only stands to entrench those advantages.

We can’t say things won’t play out that way long-term, but over the summer restart, rich clubs didn’t really derive any major advantage from it. In fact, only Serie A teams really even tried.

Of the 13 clubs to average 4.75 or higher, seven were Italian clubs. On the flip-side, most of the clubs who chose not to embrace the rule change were also from one country.

As shown in the second chart, of the 14 clubs to average 3.8 subs or fewer, 10 were from the Premier League. All but one still averaged three or more subs, meaning they did make use of the rule overall, but the differences from league to league were striking. And the Premier League probably didn’t need to take the time to vote down permanent usage of the five-sub rule, either: their teams evidently weren’t going to fully embrace it anyway.

Teams in these four leagues averaged 4.29 subs per 90 overall, but of the more well-monied clubs in these leagues, only a few were above average. Bayern Munich averaged just 3.67, Real Madrid and Chelsea 4.0, Juventus 4.08, Barcelona 4.09, Manchester City 4.1 and Manchester United 4.11. Liverpool averaged 4.67, but the Reds had also already clinched the Premier League and opened their bench up a bit.

That last part was likely key again. Stakes matter here. In matches decided by three or more goals, after all, the winning team averaged 4.68 subs per match, and the loser averaged 4.7. If nothing else, richer clubs could derive a slight advantage simply from getting to sit half their starters for 20-30 minutes in blowout wins.

Serie A was the most interesting league when it comes to use of subs, but it was interesting by a different definition when it came to penalties.

It only felt like every Juventus goal this year was a penalty, but…

“What do we do, cut off the player’s arms?” You could forgive Atalanta manager Gian Piero Gasperini for being a little dramatic after his club’s 2-2 draw against Juventus. Atalanta needed three points to stay on Juve’s heels in the Serie A title race and outplayed the champs in nearly every category, but one: kicking the ball off of defenders’ hands in close range. Two Juve penalty goals via unintentional handballs salvaged a point and, eventually, the title.

It was a fitting way to all but end the Serie A race, as handballs had become one of the definitive story lines of the Italian season. The International Football Association Board attempted to bring clarity to the handball rule in March 2019, but when combined with VAR, it made the rule awfully strict. And refs in Serie A interpreted it even more strictly than most.

How strict? This strict:

Handball calls over the Big 5 leagues increased by about 22% from 2018-19 to 2019-20, but the effect wasn’t seen in every league — for example, La Liga and Serie A teams conceded more than 0.9 handballs per match compared to 0.45 in the Premier League. Meanwhile, a good portion of Serie A handball calls came inside the box. Serie A teams averaged 0.25 penalties conceded, while none of the other Big Five leagues were over 0.16. That’s a difference of about four penalties per team per season on average, including the aforementioned two in maybe the biggest match of the Serie A campaign.

Serie A stands out in one more way: fun

No, really! You know what’s a lot of fun to watch? Players shooting. And you know which league saw more of that than anyone else (and not just from the penalty spot)? Serie A.

Were these particularly good shots? Lord, no. Napoli averaged just 0.101 XG per shot, 11th-worst in the Big 5, and Sampdoria (0.102) wasn’t far behind. In fact, only Atalanta was in the Big 5’s top 30 in this category. Still, in an era of possession teams working the ball into the box and learning what shots are of particularly high quality, it’s almost comforting to know that there’s a league out that still embraces the “you miss 100% of the shots you don’t take” philosophy. Romance is still alive in Italy.

Real Betis, or why possession isn’t always the answer

If you don’t have the bank account of an elite team, then playing the possession game becomes tenuous. Your odds of accumulating the pieces you need — the poised passers up the spine of your lineup, players with requisite finishing skill, defenders and defensive midfielders who can properly choke away counter attacks — are awfully small.

Take Real Betis. The Andalusian club hired Rubi to install the possession-friendly style he’d used to get Huesca promoted to La Liga for the first time in 2017-18. It didn’t take. Among the 26 Big 5 teams with at least a 53% possession rate, Betis had one of the lowest payrolls, averaged by far the fewest goals (only 1.26) and allowed the second-most (Serie A’s Sassuolo allowed 1.66 per match but did average 1.82 as well). Perhaps not surprisingly, they also generated far fewer points per match — just 1.08 for the season including the five games after Rubi’s June 21 dismissal. They finished just five points above the relegation zone.

A few teams proved you could win a decent amount without the ball, too. Among the 25 teams with a possession rate under 45%, four averaged at least 1.4 points per match: La Liga’s Granada and Getafe — I wrote about both of them in March — and the Premier League’s Sheffield United and Burnley. Both Sheffield and Burnley hated both the ball and substitutions, apparently, but both were involved in the race for European spots for much of the season.

Brendan Rodgers’ Leicester City were one of the biggest stories of the Premier League season, for both good (they were in second place in January) and less good reasons (they collapsed to fifth and missed the Champions League). It’s a shame the collapse ended up sucking up a lot of the oxygen, however, because they almost pulled off something fascinating: fielding a discount-brand Premier League all-star lineup with nearly Champions League-level results.

I recently stumbled across a pretty fantastic app designed to create similarity scores among European soccer players. It’s a fun tool in general — it points out things you might have already suspected about how functionally similar Robert Lewandowski and Sergio Aguero are, or Kevin de Bruyne and Angel di Maria, or Raheem Sterling and Romelu Lukaku. (Okay, probably not that last one.)

Playing with the tool, however, I started to notice Leicester players popping up quite a bit. Not only did Leicester do a more effective job of the possession-without-rampant-cash approach than clubs like Betis, but they also did a pretty incredible job of creating familiar roles for extremely talented youngsters.

You can see the vision Leicester had in putting this together, and the Foxes were basically just a little bit more scoring talent away from stealing a top-four slot. I wrote recently that it’s hard to see what more this core roster could accomplish together without more depth and scoring, but it bears mentioning that all of those players, with all of those happy similarities are either entering, or still a couple of years away from entering, their respective primes.

If they can stay together, there might still be room for this talent to blossom.

McTominay and Scotland ready to do it the hard way as England tie looms
Ronaldo breaks more records in Portugal’s win over Hungary, but will the goals continue to come against sterner opposition?
Varane and Rodrygo for Mbappe; Ronaldo, Ramsey for Pogba
Transfer Talk – Atletico Madrid set to beat Liverpool to Udinese midfielder De Paul
Netherlands captain Wijnaldum is the type of player every top team, from Liverpool to PSG, needs