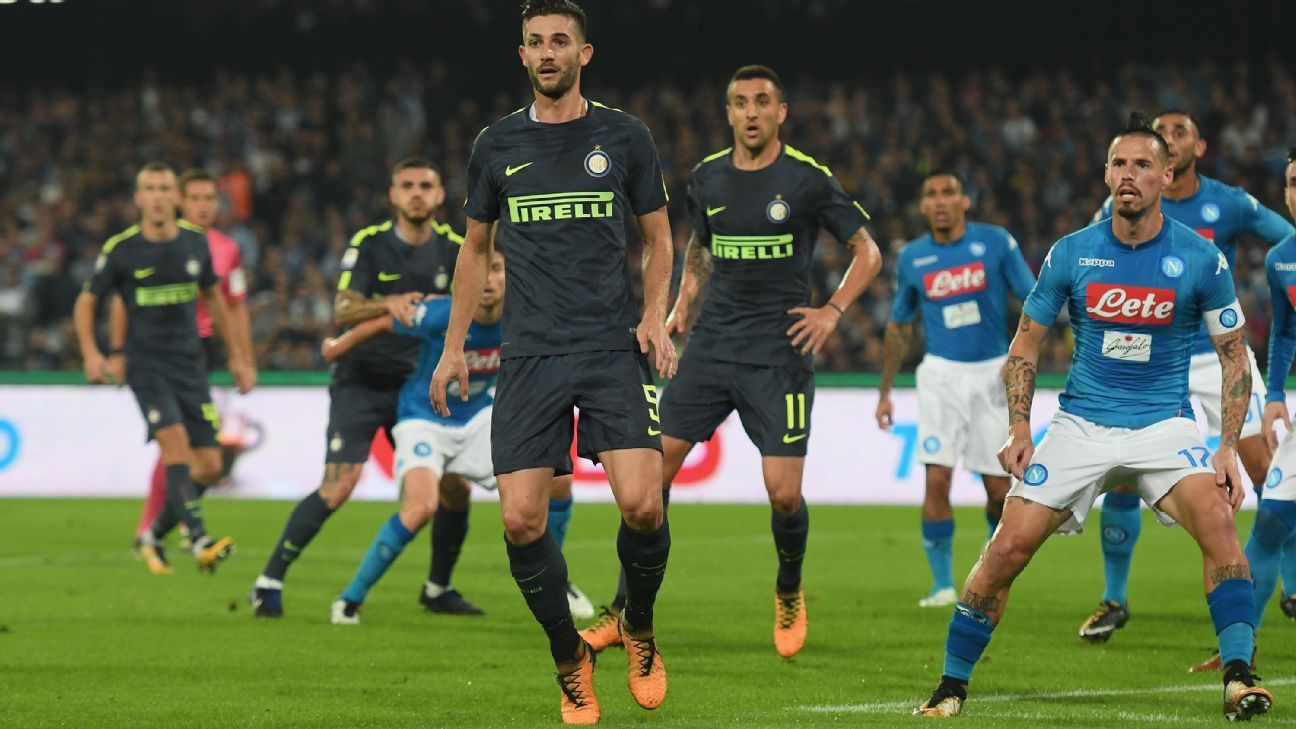 
The top of Serie A resembles a can of sardines at the moment. Four teams are packed within just four points of one another, and Roma would be as well if they win their game in hand against Sampdoria. After 10 games of the season, there is the promise of a title race contested by more than two sides; whatever happens, no one expects this year to be another Juventus monologue.

Inter spent a night alone in pole position on Tuesday night, continuing their best start for 20 years. Going 3-0 up against Sampdoria inside an hour with Mauro Icardi bagging another brace and Ivan Perisic almost scoring from the halfway line, they also hit the woodwork on three occasions. Samp manager Marco Giampaolo overheard Inter board members saying it was the best they have seen the Nerazzurri play since the treble.

Still unbeaten and with 13 points from a possible 15 against Fiorentina, Roma, Milan, Napoli and Samp, the past 10 days have been enough to make up many people’s minds about whether to take Inter seriously. There is a relentlessness about Luciano Spalletti’s team that is not to be underestimated. He has won 50 of 67 league games over the past 18 months, and while Napoli and Juventus remain favourites for the Scudetto, he will make sure Inter are at least in the conversation. Not being in the Champions League certainly helps.

Then, on Wednesday night, Napoli reclaimed the top spot but not before going behind to Genoa. Marassi is a bogey ground for Maurizio Sarri and his players. They’d been held to a 0-0 on each of their past two visits. But the Partenopei keep proving people wrong. Renowned for playing gorgeous football, it’s the grit they’re showing this season that make you believe this could be their year. For the fourth time this season Napoli came from a goal behind to win and as Sarri said, they made it look easy. The second goal of Dries Mertens’ hat-trick was truly Bergkamp-esque: he took 0.68 seconds to control a ball over the top with an outrageously good first touch and finish beyond Mattia Perin in the Genoa goal.

Napoli now appear to have the mentality for which they once envied Juventus, though it’s something they’ve had to acquire organically. As Sarri was eager to point out, the players Napoli have signed over the years do not come from Bayern or Real Madrid, but Empoli, Udinese and Bologna: teams not used to fighting for titles.

Champions Juventus aren’t worried, though. While Inter (plus-12 points from last season) and Napoli (plus-9) are Italy’s most improved teams and thus far undefeated, the Old Lady is a point better off than she was a year ago. And if she isn’t top, as Max Allegri joked, it’s purely down to Albanian goalkeepers. Had Paulo Dybala scored last-minute penalties against Atalanta (Etrit Berisha) and Lazio (Thomas Strakhosha), there would be parity between Juventus and Napoli right now. Allegri was unhappy on Wednesday night despite the Bianconeri‘s 4-1 win against SPAL, a game lit up by two stunning strikes from Dybala and Federico Bernardeschi.

Juventus have scored 10 goals in the past three days and unusually for them, they’re currently Serie A’s top scorers. It’s their most prolific start to a season since 1951 but Allegri echoed something his captain Gigi Buffon said at the weekend: you don’t win titles with 4-1 or 6-2 wins but 1-0 victories instead. For the moment, Juve switch off too much for Allegri’s liking. Opponents sense they will get a chance: Juventus have been behind four times in all competitions this season. Leads were tossed away against Atalanta and Lazio and they haven’t kept a clean sheet in five games. Italy’s best defence for six straight years currently ranks fourth. A performance like Wednesday night’s “won’t,” in Allegri’s estimation, “be enough against Milan” this weekend.

Juventus lost at San Siro last season and suffered defeat to the Rossoneri in the Super Cup, after which Allegri vowed to kick his players up the backside. Naturally Leonardo Bonucci’s shadow looms large over Saturday’s big match although cynics have pointed out that his suspension is a blessing for Milan. Vincenzo Montella’s side returned to winning ways in midweek, snapping Chievo’s six-game unbeaten run with a morale-boosting 4-1 victory in their captain’s absence.

Turning attention elsewhere, Lazio made the news for all the wrong reasons this week, with 20 of their fans bringing shame on the club not to mention owner Claudio Lotito, whose handling of an already astonishing case of anti-semitism was nothing short of jaw-dropping. Damage control created more damage and deeper offence. Once again, events off the pitch have overshadowed and detracted from what the team is doing on the pitch.

Lazio have a likeable manager, likeable players and were a feelgood story until a week ago. Privately, they might even see themselves as the Leicester of this title race. Lazio went into the midweek round on a six-game winning streak in all competitions, bettering club record starts in 2010 and 1972.

Keeping his players focused can’t have been easy for Simone Inzaghi amid the storm engulfing the club, so it was a surprise to see Lazio play some of their best football of the season, wiping the floor with Bologna in the first half at the Dall’Ara. Ciro Immobile, the top scorer across all competitions in Europe’s top five leagues, missed a penalty and a 1-on-1. He hit the woodwork three times in all but it didn’t stop Lazio beating a Bologna side that at times made life complicated for Napoli and Inter. In Sergei Milinkovic-Savic, Lazio have the most complete midfield player the league has seen since Paul Pogba left Juventus to go back to Manchester United; we also forget that the Eagles have been without Felipe Anderson all season.

Meanwhile, Roma just keep grinding away. Perceptions have been altered somewhat by their performance at Stamford Bridge as this team now feels like a Eusebio di Francesco team. Roma’s transfer window didn’t have the bells and whistles of some of their rivals but the depth that Monchi has added looks inspired. Aleksandar Kolarov is the bargain of the season in Serie A and in contrast with Napoli, the addition of experienced campaigners who are used to competing for silverware has made an already reliable team ever more dependable.

Roma have hit the woodwork 11 times this season and with a little bit of luck, particularly against Inter, would be right on the back wheel of the breakaway bunch, with a game in hand still. Their defence is Italy’s best and, as Allegri is currently reminding Juventus, the team with the best defence has won the Scudetto every year for the past 13 years.

While the smart money is on Napoli and Juve, right now it’s hard to predict with any certainty who will be crowned champions in May. The league has an open feel that it hasn’t had in years. It’s exciting and compelling and while the competitiveness of the bottom half is a matter for debate, the quality of Italy’s top six is reflected in Europe where their results this season are second only to the Premier League in UEFA’s co-efficient.

As with “Game of Thrones,” the best power struggles are always those involving several houses.