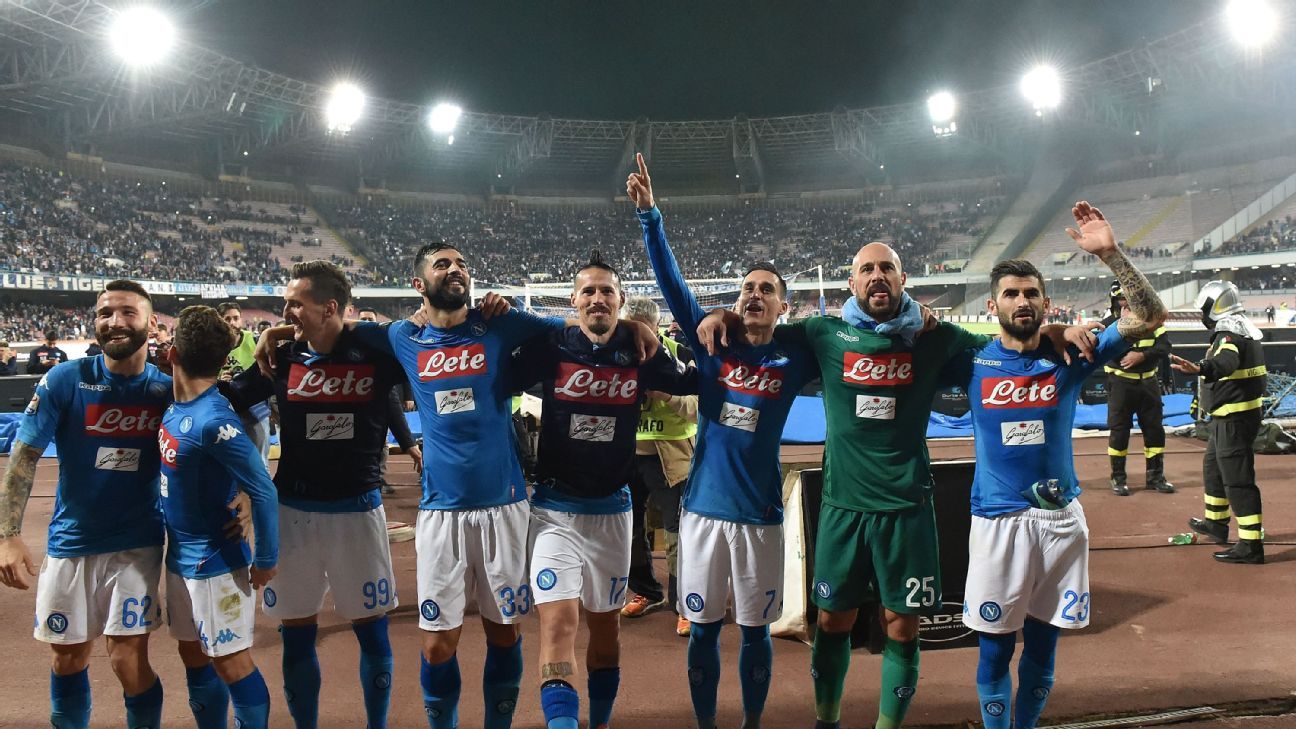 
A bicycle kick is called a rovesciata in Italian. Taken literally it can mean reversed. After all, you’re scoring with your back to goal. But the best way to look at it is upside down. The bicycle kick Simy scored to get relegation battling Crotone a point against Juventus on Wednesday night did exactly that to Serie A. It turned a title race many considered completely over on its head.

Juventus started the night six points clear of Napoli. Twice, over the course of a remarkable evening, they found themselves nine points ahead of them. Presumably, young Juventus fans went to bed thinking their team could win the league with victory over Napoli at the Allianz Stadium on Sunday. It was 10pm and hapless Udinese had somehow contrived to take the lead for a second time in Fuorigrotta. What on earth was going on? Udinese had lost their previous nine games. Napoli, it seemed, were losing their nerve. But then the incredible happened.

Simy’s bicycle kick wasn’t as aesthetically pleasing as the one Cristiano Ronaldo scored against Juventus in April. It won’t be anywhere near as iconic. But perhaps, with time, Napoli fans will come to look at it with greater affection. When word reached them that this 25-year-old Nigerian had cut Juventus down to size, the roar at the San Paolo was deafening. Down on the sidelines, Maurizio Sarri didn’t know what they were shouting about. Then it dawned on him. He asked his assistant for the Juventus score and everything became clear.

Two minutes later Raul Albiol equalised for Napoli. They never looked back. Arkadiuz Milik, starting ahead of the jaded Dries Mertens, put his team in front at 10:14pm local time. The Pole started Napoli’s late comeback against Chievo here a fortnight ago when Sarri also credited the crowd with inspiring a desperate looking team to victory. Then Albiol’s centre-back partner Lorenzo Tonelli profited from another corner kick routine to seal the deal. It was Napoli’s 12th set-piece goal this season. Tonelli used to score regularly from those situations at Empoli under Sarri and was reintroduced to the starting XI with that firmly in mind. Goals have dried up for Mertens and Jose Callejon, leading Sarri to look elsewhere for them.

Lost and found not only describes the search for alternative scorers, but Napoli’s title challenge. As recently as three days ago it looked dead and buried, when Milan’s Neapolitan goalkeeper Gianluigi Donnarumma denied Milik a stoppage-time winner at the San Siro. The final whistle of that game could quite as easily have been the sustained beep of somebody flatlining. And yet Napoli are alive and kicking.

Just four points separate the Partenopei from Juventus ahead of Sunday night’s clash in Turin. Massimiliano Allegri claims: “I would have signed for that”, had anyone offered him the opportunity to have such an advantage over Napoli going into this game. But he struggled to hide his disappointment at dropping another two points away to a team fighting for their lives. It had happened away to SPAL in March and it happened again in Crotone on Wednesday night — a reminder, if one were necessary, that there are no easy games in Serie A.

Allegri was not impressed with how his team managed the game at 1-0. They could have kept the ball a lot better and used it to greater effect. “I felt like we were going to concede already in the first half,” he said. The 10 consecutive clean sheets Juventus started 2018 with in Serie A feel like a long time ago now. One in their last six in all competitions is most un-Juventus-like although Giorgio Chiellini is expected to return at the weekend.

Sarri, meanwhile, chose to play things down after Napoli’s ninth come-from-behind win of the season. He was keen to point out that his team had already secured qualification for the Champions League with six games to spare. This was the season’s objective, he claimed. In corroboration he argued there are, as far as he is aware, no title-related bonuses in the players’ contracts. But they do have one for reaching the Champions League. Evidently that was the club’s principal goal, Sarri posited.

Expectation management was the name of this particular game or was it? By saying Napoli have achieved their goal, Sarri wanted to get the idea across that the pressure is now off. “From tonight,” he said, “we can enjoy ourselves. We want to have a bit of fun.” Building Sunday’s game up as the be-all and end-all wouldn’t help his players. Clearly he wants the team to go into it in as relaxed a frame of mind as possible which, you have to say, is easier said than done for the likes of Lorenzo Insigne and a fan base that has waited 28 years for a league title.

Sarri does not believe the Scudetto will be decided on Sunday. “Limiting it to that seems reductive when there will be another five games left,” he said. Juve still have to go to Inter and Roma whereas Napoli’s run-in, with the exception of a trip to Florence, is all downhill. “We have to try and win,” Insigne said.

A draw would also keep things on a knife-edge, particularly when you consider Juventus also have the Coppa Italia final against Milan just four days before the Roma game at the Stadio Olimpico. Unbeaten in 29 games on the road in Serie A, a run stretching all the way back to October 2016, Napoli have to back themselves. Nagging away at the back of their mind though is the knowledge that their last away defeat happened at this location, the Allianz Stadium.

Can they emerge from its walls unscathed, possibly triumphant? Not if Juventus can help it. The Old Lady is a femme fatale. Allowing Napoli’s title challenge to get out alive isn’t an option. “Win on Sunday and we kill the league,” Allegri said in Crotone.

No wonder La Gazzetta dello Sport is billing it la Madre di tutte le Partite: the Mother of all Games.