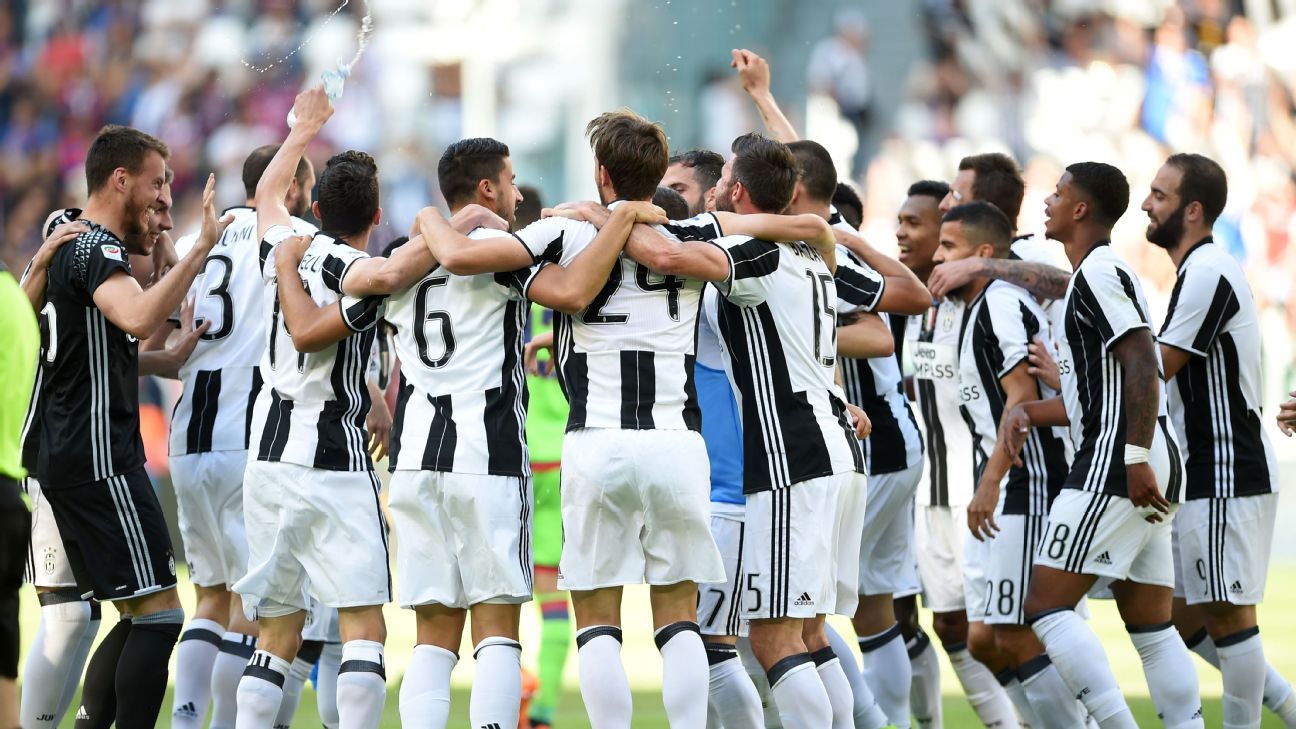 
Serie A is back from its summer holidays this weekend. James Horncastle looks ahead to what could be the most open season in years:

Before Paris Saint-Germain signed Neymar, the biggest story of the summer was how Milan were spending at a rate not seen since Roman Abramovich became Chelsea owner in 2003. The scale of the investment — €215.5m — and its targeted nature has lent credibility to the project even though doubts remain about exactly how much of the money is president Li Yonghong’s and whether Milan’s business plan is compliant with Financial Fair Play. Still not done in the transfer market, the standout pieces of business will remain the signing of Leonardo Bonucci from Juventus and the contract extension for goalkeeping wunderkind Gianluigi Donnarumma. A sleeping giant is rousing from its slumber.

This section could have been devoted to VAR going online in a country where it is so badly needed but, as an old romantic who blubbered through Francesco Totti’s retirement from Roma, I will dedicate it instead to Gigi Buffon and his swansong season. The 39-year-old plans on retiring after the World Cup in Russia, Italy’s qualification for which depends a lot on September’s trip to Spain. But if Juve do make it third time lucky and wins the Champions League in Kiev, he will also honour a promise made to president Andrea Agnelli and pull on his gloves again for the UEFA Super Cup and FIFA Club World Cup.

For the first time in six seasons Serie A will have four Champions League spots up for grabs. Juventus aside, that owes more to politicking than merit and Agnelli is already worried that, if the other Italian sides don’t start pulling their weight, Ligue 1 will do what the Bundesliga did in 2011 and take it off them. Until then, greater access promises to be a game-changer for Italian football. Inter and Milan’s decline has in part come because they have been starved of Champions League revenue although, even had four-team qualification been in place over the last six years, they wouldn’t have always qualified. But the stakes are higher this year.

Bonucci has made no secret of wanting to “do for Milan what [Andrea] Pirlo did for Juventus.” Six years ago the midfielder’s move was the hinge on which the balance of power swung in Italy and Bonucci now hopes to do the same in the opposite direction. The consequence of his fallout with Max Allegri is similar to the manager’s marginalisation of Pirlo in 2011, in that it strengthens a rival. Juventus and Bonucci could have got a lot more if he had left for Manchester City or Chelsea. Instead, Milan have got themselves one of the best centre-backs in the world for a steal of a price.

Juventus’ switch to 4-2-3-1 in January helped propel the team to a second Champions League final in three years but, during the second half in Cardiff, it became abundantly clear they didn’t have a squad built for it. Costa and Federico Bernardeschi have been signed to make the system a more natural fit and Gonzalo Higuain must be licking his lips at having both of them and Paulo Dybala behind him. “Wherever I go, I quickly become a striker’s best friend,” Costa told La Gazzetta dello Sport. “It happened with Luiz Adriano in Ukraine and Robert Lewandowski at Bayern. You’ll see. Higuain and I will get on well.”

Probably the bargain of the window, Borja is the midfield general Inter have lacked, at least in a tactical sense, since the 2014 departure of Esteban Cambiasso. Manager Luciano Spalletti wanted him at Roma last season and not just for his ability to play between the lines and knit teams together; Borja makes the players around him better and is a leader. He was nicknamed “the mayor” in Florence and Inter have badly needed a player of his ability and character.

Not allowed to express himself as much as he would have liked, Alves decided after just a year that Italian football wasn’t for him. The Brazilian full-back’s decision to double his money and act as an incentive to Neymar surprised and disappointed Juventus and, as with the Bonucci situation, the departure has left them in a bind. Alves was the club’s major difference maker in the knockout stages of the Champions League last season and brought a risk-taking swagger to their play. He will be a big miss even if both parties didn’t end on the best of terms.

Hart’s popularity off the pitch, as well as the novelty of an Englishman playing for a club as romantic as Torino, ultimately wrote cheques off the pitch that his body couldn’t cash on it. Torino owner Urbano Cairo probably drove him to the airport, in part because he sincerely liked Hart, but also because he knew the club could do better with new signing Salvatore Sirigu.

Antonio Cassano: Hellas Verona to retirement (for now, at least)

Asked in June why a top-flight club should take a punt on him after a year out of the game, Antonio Cassano boasted: “Because I’m still the best there is in Italy.” Hellas rolled the dice and reunited him with his old strike partner Giampaolo Pazzini, giving fans of a certain age pangs of nostalgia. Shortly after, though, Cassano quit training camp and announced his retirement. He then had second thoughts, went back on the decision and returned to training, only to re-quit and retire a few days later. Talk about one of the game’s biggest wasted talents.

Who will win the league?

Juventus’ rivals are sniffing blood but the champions have sold multiple big-name players in other years — most notably 2015 — and still won the title. They remain favourites but, if the crown slips, Napoli look best placed to take it from them. Unlike last year, they’ve kept their best players and just need to pick up where they left off.

Naturally Milan are being billed as contenders but it remains to be seen if an entire new team can come together quickly enough to join the title race. Inter have had a fantastic preseason and, after underperforming last year, are perhaps not being taken as seriously as a Luciano Spalletti team should be. Spalletti already looks to have knocked them into shape and they’re close to completing an already-talented squad with some astute, if low profile signings.

Meanwhile, Roma may have changed too much to contend, although the hope is Eusebio di Francesco will make the same leap in his coaching development as Allegri and Maurizio Sarri did when they went from Cagliari and Empoli to Milan and Napoli respectively. Fresh from winning the Super Cup, Simone Inzaghi’s Lazio also don’t look like fading away despite losing Lucas Biglia, and in all probability, Keita Balde Diao.

Battle at the bottom

The most pessimistic fans are, quite rightly, those of Fiorentina, although it’s unlikely they will be drawn into the relegation battle under Stefano Pioli. Almost all of the club’s best players wanted to leave this summer and ended up getting their way, but there look to be some hidden gems — Rafik Zekhnini and Nikola Milenkovic — in their transfer window in addition to the better-known Giovanni Simeone, who is expected to arrive from Genoa.

Sassuolo are a minor concern now Di Francesco has departed for Roma, but at least Domenico Berardi is sticking around for another year. Sampdoria’s mini-Monaco model, which has seen Milan Skriniar, Luis Muriel, Bruno Fernandes and, likely, Patrik Schick all leave, places a lot of trust in the recruitment of Riccardo Pecini as well as the coaching of Marco Giampaolo. But they should still stay up.

Whether second season syndrome afflicts Cagliari will be a storyline to follow and it’ll be interesting to see if Genoa are able to quit their dangerous liaisons with relegation. Crotone seemed to have Serie A all figured out toward the end of last year but the limited material at Davide Nicola’s disposal was, in part, what made their escape so great.

Of the promoted clubs, Hellas have a goalscorer in Pazzini while SPAL, back in the top flight after 49 years, have been able to keep many of those who who got them up, including their goalkeeping star Alex Meret. This has been more of a challenge for debutantes Benevento, who will be aware of how that proved Pescara’s downfall last season.