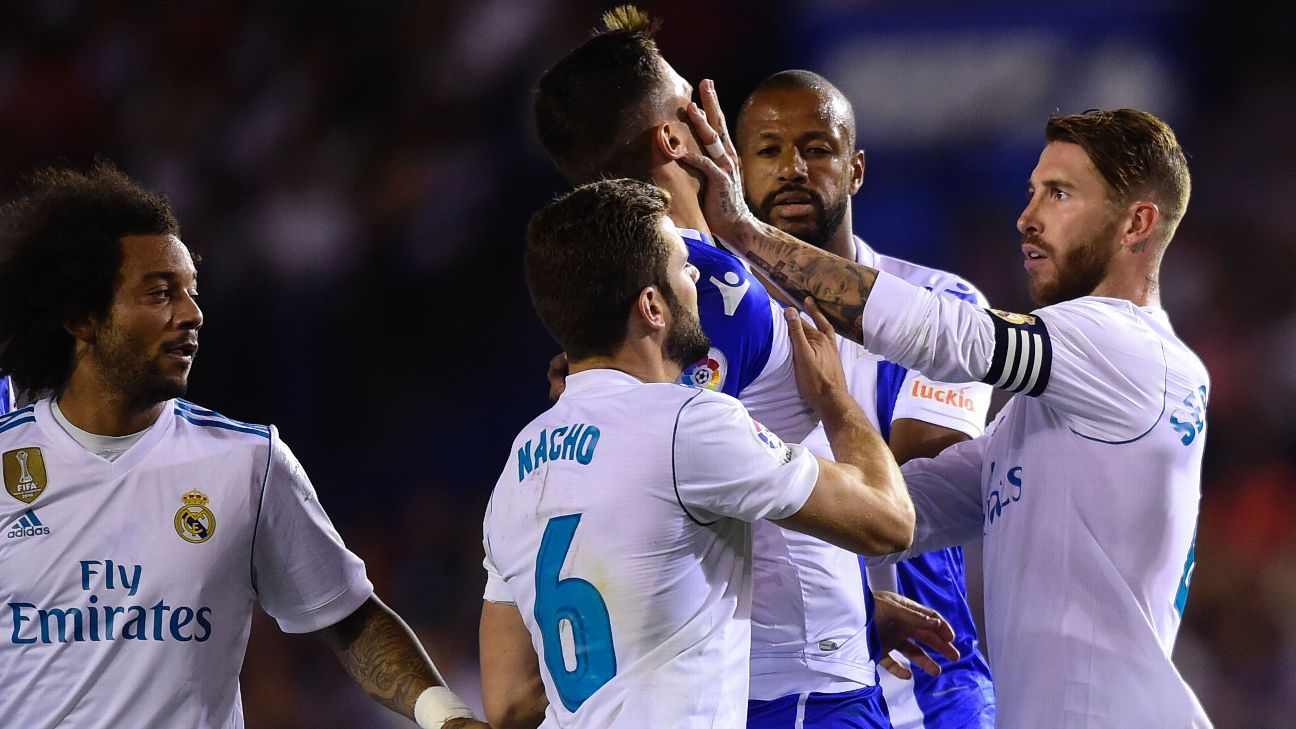 
Few observers were shocked when Sergio Ramos became the most sent-off player in La Liga history late in Real Madrid’s 3-0 La Liga opening weekend win at Deportivo La Coruna on Sunday evening. But a look back through the record books shows surprisingly how the Bernabeu outfit have rarely been too troubled by his subsequent absences through suspension.

Ramos was quite lucky just to be booked midway through the second half at Riazor after an entanglement with Depor centre-back Fabian Schar that saw him raise a hand into the Switzerland international’s face. It meant that sympathy was limited when he was a bit unfortunate to pick up a second yellow during added time after jumping with his arm raised in an aerial challenge with Depor substitute Borja Valle.

In total, Ramos now has 23 red cards in 526 Madrid games, a club record ahead of former Blancos “tough guys” Juanito and Fernando Hierro. Sunday’s was also the 18th La Liga sending off for the 31-year-old: an all-time record along with his former Sevilla teammate Pablo Alfaro and ex-Zaragoza defender Xavi Aguado. He has also been ordered from the pitch three times in the Champions League and twice in the Copa del Rey.

In addition, Ramos has 147 yellow cards, putting him fourth on the all-time Primera Division list headed by current Getafe defender Alberto Lopo, who has 14 reds too — Lopo was actually playing when Ramos got his first career red soon after he joined Madrid as a teenager in 2005.

Those who feel that Ramos’ reputation in Spain precedes him, and therefore that trouble follows him around rather than vice-versa, can point to the 143-cap international having never been sent off when representing his country. This apparent anomaly was put to him in the Riazor mixed zone on Sunday evening, and he repeated claims he has made before that he feels he gets a raw deal from Spanish domestic officials.

“Not everybody likes that we are doing well, but we sleep fine every night,” said Ramos. “There were some controversial moments. I don’t think decisions are made in advance, but sometimes people should pay more attention.

“Maybe referees allow more in the Champions League and in internationals. Maybe we should look a bit more at the English model, where they let play go more.”

Whether Ramos would really benefit if Spain’s disciplinary committees did start to review TV evidence of games is a moot point. What we can say, however, is that Madrid have often tried everything to lessen the punishments handed out when he is red carded. The club have often appealed his dismissals, even managing to free him completely from any sanction on three different occasions.

Images were successfully used to “prove” that a handball penalty against Villarreal had been incorrectly awarded, in what was current Blancos coach Zinedine Zidane’s last game as a player at the Bernabeu in May 2006. Villarreal were again the opponent in 2012, when Madrid’s legal team found an error in the referee’s report, which was filed after a particularly chaotic match that saw then-Madrid boss Jose Mourinho also sent to the sidelines.

Such arguments also seem to have ensured that Ramos has missed remarkably few games through suspensions following his many sendings-off. Quite fantastically, his previous 22 red cards have brought suspensions covering a total of just 24 matches. Of these, Madrid have won 18, lost three and drawn three: They did not miss their captain too badly.

There has been just one two-game ban, after Ramos got an extra punishment for insulting the referee on his way from the pitch following an elbow on former Liverpool striker Florent Sinama-Pongolle in a Liga clash with Recreativo Huelva in 2008.

Ramos’ longest suspension was five games back in January 2013, when he reacted angrily to being shown a second yellow for a dangerous challenge on Celta’s Augusto Fernandez (with his team already 4-0 ahead) and calling the match officials “shameless,” having “spent the whole game f—ing us.” Usually though, Ramos has missed just one game for his dismissals, even when getting straight red cards for dangerous play or challenges from behind.

Barcelona’s Lionel Messi has been on the receiving end a couple of times — most recently in last April’s 4-3 Clasico defeat at the Bernabeu. The aggressor again got the bare minimum punishment on that occasion, and Madrid won 6-2 at Deportivo the following week.

It is also striking how often Ramos returns from suspension just in time to make a big impact. In early 2013, he was sent off twice in two months, and on both occasions, his first games back were Clasico wins against Barca, with the defender even scoring the opener in a 3-1 victory at the Camp Nou.

On Sunday evening, Madrid’s director of institutional relations, Emilio Butragueno, suggested that Madrid would be appealing again this time around, and it is quite possible that the second yellow card will get rescinded and there will be no suspension again. But the success of the latest appeal might depend on how generous Spain’s disciplinary authorities are feeling given last week’s furore over Cristiano Ronaldo’s five-game ban, including four extra for pushing the referee in the Spanish Supercopa.

Generally, the record shows perhaps why Ramos has not changed his ways at all despite so many reckless red cards over the years. He may often get sent from the pitch, but neither he nor his team usually suffer too badly.