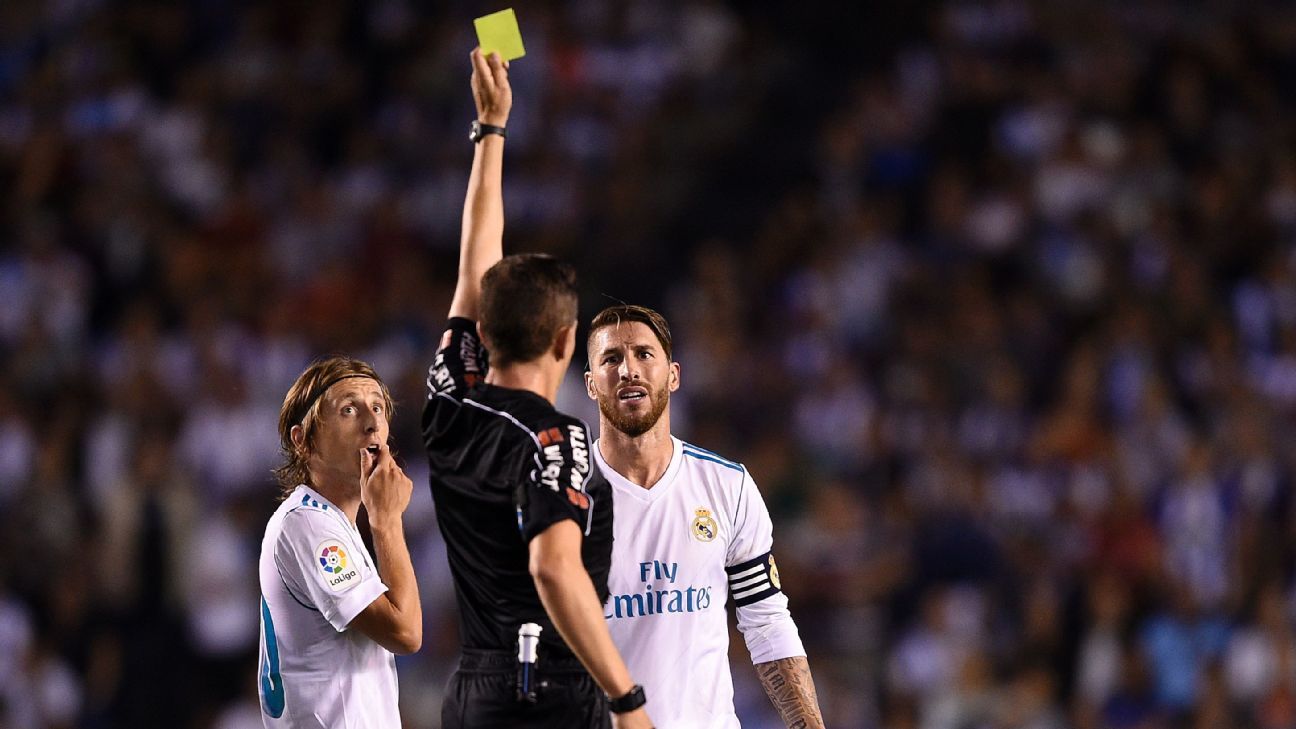 
Real Madrid captain Sergio Ramos has said jealousy of his side’s success is behind recent refereeing decisions going against them, such as his sending off in Sunday’s 3-0 win at Deportivo La Coruna.

Goals from Gareth Bale, Casemiro and Toni Kroos brought the three points as the champions began their title defence with a victory, but there was controversy in the second half as Ramos was first booked after tangling with Deportivo defender Fabian Schar, then shown a second yellow in added time following an aerial challenge with home substitute Borja Valle.

This followed a week in which Madrid have railed against the Spanish authorities, with coach Zinedine Zidane repeatedly talking of his unhappiness with the five-game suspension handed to Cristiano Ronaldo for his dismissal in the first leg of the Spanish Super Cup.

After his record-equalling 18th career La Liga red card, Ramos said in the Riazor mixed zone that it seemed “not everybody likes” that the double Champions League winners were doing so well.

“We can all talk freely,” Ramos said. “Not everybody likes that we are doing well, but we sleep fine every night. There were some controversial moments. It was most important to begin with a win, but when you end up off the pitch after a harsh decision with the second yellow…”

Ramos now has 23 red cards in all competitions during his 526 Madrid games, but is yet to be dismissed in 143 Spain caps. However, he does not think Spanish referees target him specifically, although he said officials in England, in particular, do a better job overall.

“I don’t think decisions are made in advance, but sometimes people should pay more attention,” he said. “Maybe referees allow more in the Champions League and in internationals. We should look a bit more at the English model, where they let more things go. They also look back more on events afterwards, and are punishing dives now. That is better than what we do here.”

The 31-year-old maintained that the second yellow card, given for jumping with an arm raised, which saw Valle drop to the floor holding his face, was particularly harsh.

“I just watched it back 10 times, and there was no intention to hurt the opponent,” Ramos said. “The referee interpreted it like this. You must respect that, [but] I was just supporting myself in the air. I jumped much higher and only made contact with his shoulder.”

Ramos said the first booking came when he was protecting himself after Depor had reacted angrily when he did not put the ball out of play to allow an injured player receive attention.

“They all ganged up on me,” he said. “Schar hit me with his head in my cheek. I pushed him away. I wasn’t trying to hurt him, just get away from him.”

Asked on BeINSPORTS after the game whether he would speak to Ramos about his latest sending off, Madrid vice-captain Marcelo said it was not his job to tell his skipper what to do.

“This is football, these things happen,” Marcelo said. “But it is not for me to say something to the Madrid captain. It was a difficult game today, but I’m not here to say what he did well or badly.”

Madrid’s director of institutional relations Emilio Butragueno suggested that the club would look to appeal Ramos’ second yellow in order for him to play at home to Valencia next Sunday.

“The second yellow is very harsh,” former Madrid striker Butragueno said. “It is a normal aerial challenge. We will see if we can appeal it, [and if so] we will do it. He is a very important player for us. And the next game is against Valencia.”