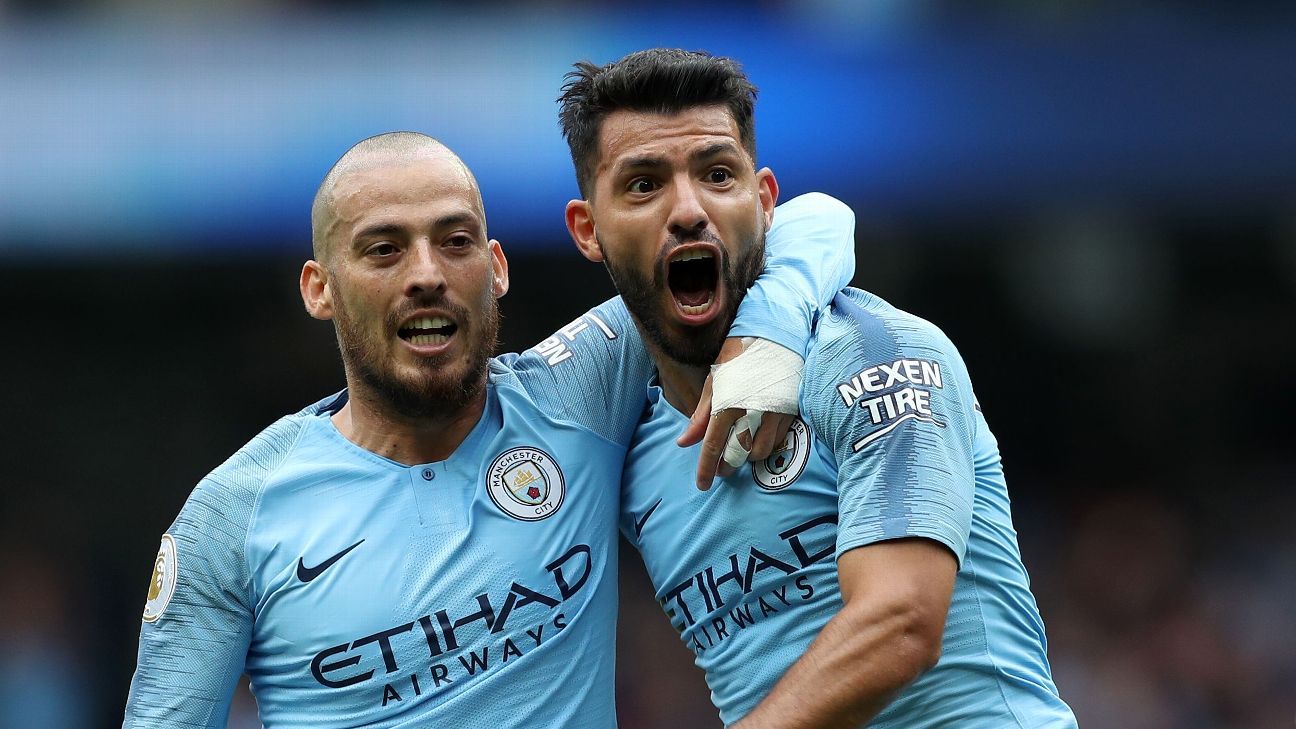 The second weekend of the 2018-19 Premier League season is all but in the books. Join Nick Miller as he looks back on the best and worst on offer in England’s top flight.

Kieran Trippier’s free kick reminded England fans of happier times, and Will Hughes’ strike against Burnley was a thumper. But just because it was so unusual, we tip our hats to Glenn Murray’s opener against Manchester United. Perhaps there was an element of fortune, but the chutzpah required to try a delicate, outside of the foot chip from eight yards out has to be applauded.

Goalscorer of the weekend

Sergio Aguero’s hat trick against Huddersfield took him to 146 strikes, and into the top 10 Premier League goalscorers. He has scored those goals in 208 games, meaning that at 0.7, his goals/game ratio is the best of anyone else in the top 10. It also means that, if he continues scoring at this rate, he’ll probably overhaul Alan Shearer at the top of the list somewhere around the middle of the 2020-21 season. He’s pretty good.

Inevitability of the weekend

It would have taken plenty of backbone, but there’s a case to be made that Manchester United should have sacked Jose Mourinho as soon as he started complaining about transfers in the summer. Having given him a new contract in January that was never likely, but anyone who has followed his career has seen this film before.

Mourinho is ultimately not wrong that United need better players than they have, it’s just he’s the wrong person to make the point considering he bought a lot of them. The complaints are only phase one, and we saw phase two when he took out his frustrations on a journalist after the pathetic defeat to Brighton. He could turn it around, but this is familiar, and it won’t end well.

Green shoots of the weekend

Maurizio Sarri will preach caution and maintain time is required before this Chelsea look like his Chelsea. But the win over Arsenal brought plenty of reasons for him to be optimistic.

Jorginho, for example: Already he is doing exactly what Sarri wants him to, dictating play from deep and the pass which led to Pedro’s opener was absolutely delicious.

Even more encouraging was the performance of Alvaro Morata. Not just his goal, but the striker already looks far more confident than during his torrid latter half of last season. In the first-half, for example, he hit the target with a decisively-taken shot, which you suspect in his lower moments he would have dithered over. He’ll need a few more goals yet, but like the rest of the Chelsea team, the early signs are good.

Starters of the weekend

Two games in, let’s not get carried away, don’t look at the league table etc. But Bournemouth and Watford, having won both their fixtures so far, will be pretty pleased with themselves, having defeated West Ham and Burnley respectively this weekend. These are clubs for whom the first priority is survival, so if nothing else they can be satisfied that the six points they have represent a little less than a sixth of their target already, and the season hasn’t really started yet.

‘It’s time’ of the weekend

It’s perfectly understandable that Unai Emery wants to ease Bernd Leno into the Arsenal team. Throwing a new goalkeeper straight into the top of the Premier League is a tricky business: Even David De Gea struggled at first.

But introducing him is becoming a necessity, given the performance of Petr Cech at Stamford Bridge. You could make excuses for him with all three goals, but equally you could see signs that Cech’s race as a top-level goalkeeper is run. He tried to save Pedro’s strike with his legs for no real reason, and he dived the wrong way after Morata had shot for his.

Cech, you suspect, would have saved those two in his peak days. Emery might think he has enough problems in defence without throwing in the added issue of a new goalkeeper, but the time has come to replace old with new.

Worst defending of the weekend

Hats off to Everton for the brilliant training ground move that resulted in Theo Walcott’s goal against Southampton, a goal accompanied by endearing looks of joy and surprise that it had come off.

Still, Marco Silva might want to set a little more training ground time aside for defending corners, given the time and space his team allowed Danny Ings for Southampton’s goal. It wasn’t that Ings outfoxed a marker, or too easily created his own space — it was more that he was simply allowed to stand completely alone in the six-yard box as a corner was taken and the ball fell to him.

Predictable sight of the weekend

Mark Hughes carries the permanently irked look of a man given a parking ticket for leaving his car for two minutes longer than permitted. Usually, the source of his ire is the referee, and the tedious sound of Hughes complaining about officialdom was heard again this weekend.

He may well have a point about Jordan Pickford bulldozing Ings and perhaps thus deserving of a red card. But the problem is he’s the boy that complained wolf, the manager who has whined so often it’s very easy to ignore, and block out a potentially legitimate grievance.

Bad decision of the weekend

Perhaps you can’t be too harsh about Huddersfield losing their first two games, given they were against Chelsea and Manchester City. But to do so while shipping nine goals is far from ideal, and David Wagner’s decision to pick Ben Hamer in goal — at fault for at least two goals against City — has to take some blame for that.

Hamer was apparently selected ahead of Jonas Lossl on the basis of some good performances in preseason, but he only made three league starts for Leicester last term and there was a reason they thought they could do better. Ironically, they signed Danny Ward instead, the keeper who was a promotion hero in 2016-17 for … Huddersfield.